The Book Tour Stops Here: A Review of "I'll Have What She's Having" by Erin Carlson, Served up with Tiramisu Cream Clouds (And a Book Giveaway!)

Happy Tuesday! I am a sucker for a good romantic comedy and three favorite films on my Top Ten Romcom List are Sleepless in Seattle, You've Got Mail, and When Harry Met Sally. All are Nora Ephron films, so I am beyond excited and happy to be a stop on the TLC Book Tour for "I'll Have What She's Having: How Nora Ephron's Three Iconic Films Saved the Romantic Comedy by Erin Carlson. (It publishes today!) Along with my review, I have a recipe for some Sleepless in Seattle-inspired Tiramisu Cream Clouds and if that isn't sweet enough, there's a giveaway for a chance to win a copy of the book at the bottom of the post. 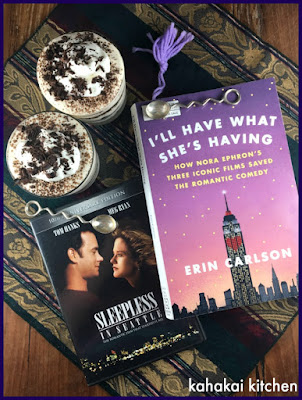 A backstage look at the making of Nora Ephron’s revered trilogy–When Harry Met Sally, You’ve Got Mail, and Sleepless in Seattle–which brought romantic comedies back to the fore, and an intimate portrait of the beloved writer/director who inspired a generation of Hollywood women, from Mindy Kaling to Lena Dunham.

In I’ll Have What She’s Having entertainment journalist Erin Carlson tells the story of the real Nora Ephron and how she reinvented the romcom through her trio of instant classics. With a cast of famous faces including Reiner, Hanks, Ryan, and Crystal, Carlson takes readers on a rollicking, revelatory trip to Ephron’s New York City, where reality took a backseat to romance and Ephron–who always knew what she wanted and how she wanted it–ruled the set with an attention to detail that made her actors feel safe but sometimes exasperated crew members.

Along the way, Carlson examines how Ephron explored in the cinema answers to the questions that plagued her own romantic life and how she regained faith in love after one broken engagement and two failed marriages. Carlson also explores countless other questions Ephron’s fans have wondered about: What sparked Reiner to snap out of his bachelor blues during the making of When Harry Met Sally? Why was Ryan, a gifted comedian trapped in the body of a fairytale princess, not the first choice for the role?

After she and Hanks each separately balked at playing Mail’s Kathleen Kelly and Sleepless‘ Sam Baldwin, what changed their minds? And perhaps most importantly: What was Dave Chappelle doing … in a turtleneck? An intimate portrait of a one of America’s most iconic filmmakers and a look behind the scenes of her crowning achievements, I’ll Have What She’s Having is a vivid account of the days and nights when Ephron, along with assorted cynical collaborators, learned to show her heart on the screen. 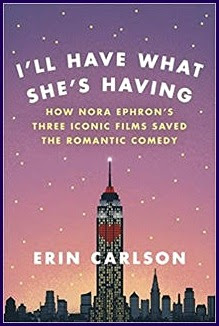 As mentioned in the intro, I love the three movies this book is focused on, romcoms, and movies in general. I am also an entertainment trivia junkie. It's not so much the gossip that I am interested in, it's more the behind-the-scenes glimpses of my favorite movies and television shows, such as who were the top contenders for the roles, how did lines end up in making it in, what scenes were cut and why, and who got along and who didn't. (OK, maybe there is a little bit of gossip girl in me!) I was convinced from the description that I would enjoy this book and it didn't disappoint me at all.

Erin Carlson is an entertainment journalist and she writes in an engaging way that made me feel like I was on each set, watching the films being made. She gives us the background of Nora Ephron--interesting in its own right. Besides being a fan of her movies, I enjoy Ephron's writing having read Heartburn a few years ago and delving into I Feel Bad About My Neck more recently--so although I knew something about her background, it was interesting to learn more. But, at the end of the day, I was in it for the movies and there are plenty of interesting facts, details, and juicy bits to enjoy. I wanted to re-watch the three films as I read about them, but time was tight for me this month and I only managed You've Got Mail last weekend. It was fun to watch and look through the different scenes with this book in hand and I intend to repeat it with Sleepless in Seattle and When Harry Met Sally very soon.

I think anyone who loves movies, especially romantic comedies, and who admires and appreciates the amazing talent that Nora Ephron was, couldn't help but enjoy this book. It's a tribute to Ephron, but it doesn't sugar-coat her cynical and sometimes difficult sides, or those of the actors and other notables that she chose to work with. The details and trivia are absorbing and entertaining and it's a fun and fascinating read--one of my favorites for August. If you'd like a chance to win a copy for yourself, don't forget to enter the Rafflecopter giveaway (open to U.S. and Canada readers of this blog) at the end of this post. 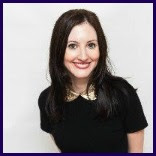 Author Notes: Erin Carlson has covered the entertainment industry for The Hollywood Reporter and AP. Her work has appeared in Glamour, Fortune, and the LA Times. She compiled and wrote an oral history of You’ve Got Mail for Vanity Fair. She holds a masters in magazine journalism from Northwestern, and has been profiled in the New York Times.

There were several food mentions scattered throughout the book--mostly from the movies and the movie sets, although I was pretty clear from the start that I would have to make something tiramisu-related from the well-known scene in Sleepless in Seattle where Sam (Tom Hanks) wants to know what tiramisu is from his friend Jay (Rob Reiner): 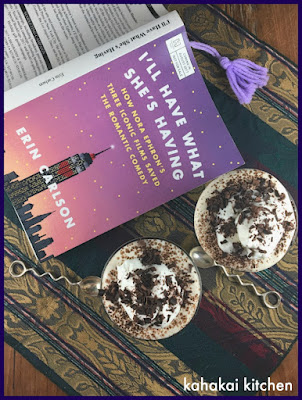 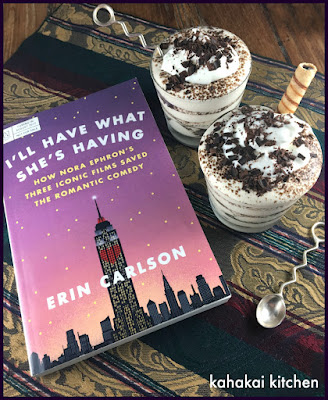 The book says, "Sleepless is the second in a trilogy of Ephron-scripted romantic comedies that combined old-fashioned romance with hilarious truths about contemporary relationships (one word: tiramisu) to shape ideas and expectations about love, however pie-in-the-sky." 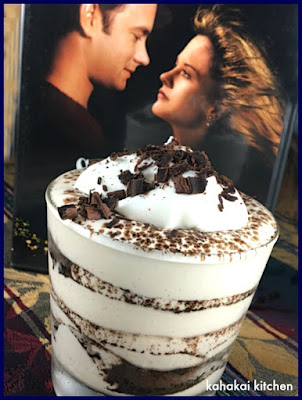 So I have made Tiramisu before--both before the blog and once for it--Donna Hay's Deconstructed Tiramisu--which I love because honestly, I don't like the cookies or cake soaked with the coffee liqueur all that much. I find them a bit soggy--plus the lady finger biscuits can be both difficult to find and expensive. 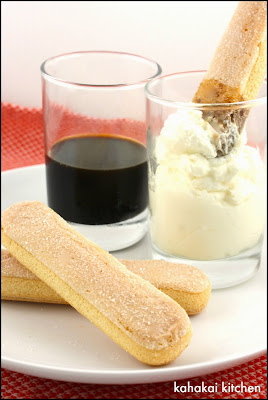 What I do really like is puffy clouds of mousse-like desserts and one of my favorites puffs of creamy mascarpone goodness is in Yotam Ottolenghi's Fruit Cream Crumble. 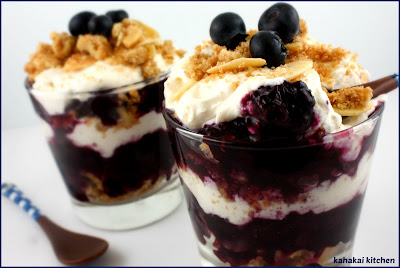 I decided to take his mix of mascarpone, whipped cream and Greek yogurt and flavor it with dark coffee and coffee liqueur and layer it with chocolate shavings and make a pillowy tiramisu-flavored dessert--these Tiramisu Cream Clouds. 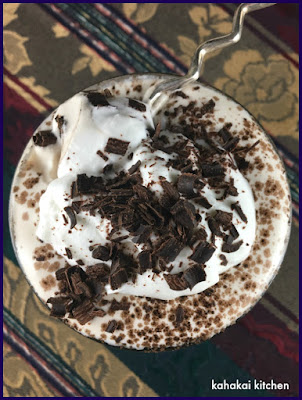 Place all ingredients through vanilla extract in a large mixing bowl and whisk to soft peaks and a pillowy texture (taking care not to over-whip). Allow mixture to chill and firm for an hour or so before assembling.

To assemble: spoon a layer of the cream into each of four dessert cups or glasses and sprinkle lightly with the grated dark chocolate and/or cocoa powder. Repeat layers of cream and chocolate shavings until you reach the top of the glass. Sprinkle a later of the shaved chocolate on top. Chill for at least another hour before serving.

You can serve with a favorite cookie and extra whip cream if desired. 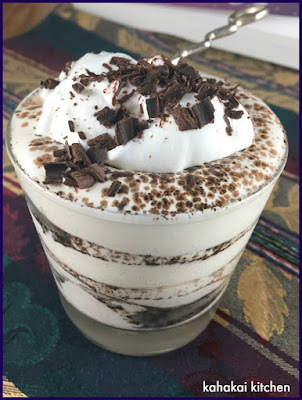 Notes/Results: I love coffee, chocolate, coffee liqueur, and anything mousse-like, so this was a winner for me. I purposefully keep it less sweet, but you could adjust it to have more sugar and more or less coffee flavor, depending on what you like. I like the little pop of the coffee liqueur, but you could leave it out if you want an alcohol-free version. It's nice to have something crisp to dunk in the soft pillows of cream, so if you find lady fingers, you can use those, or any crispy cookie you like. I used the Frappuccino cookie straws from Starbucks--the book notes that Starbucks flowed liberally on the Sleepless set and of course you get some glimpses in the movie. I was very happy with this dessert and would make it again. 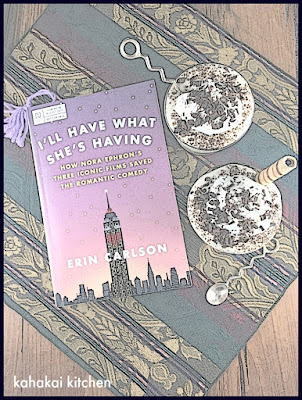 Note: A review copy of "I'll Have What She's Having" was provided to me by the author and the publisher via TLC Book Tours. I was not compensated for this review and as always, my thoughts and opinions are my own.

The publisher is generously providing a copy of I'll Have What She's Having to give away (U.S. & Canada addresses only, sorry) here at Kahakai Kitchen.

To enter the Rafflecopter Giveaway below, leave a comment (Because I like to read them!) ;-) telling me your favorite romantic comedy and/or why you'd like to win a copy of "I'll Have What She's Having."

There are a couple of other optional ways to get more entries to win: 1) Tweet about this giveaway or 2) follow me on Twitter (@DebinHawaii) and/or Author Erin Carlson (@ErinLCarlson) (Note: You can still get extra entries even if you already follow me and the author on Twitter.)

Deadline for entry is midnight (EST) on Friday, Sept. 8th.