The Book Tour Stops Here: A Review of "The Right Side" by Spencer Quinn, Served with a Recipe for Green Tea & Apple Sorbet

Today I am happy to be a stop on the TLC Book Tour for The Right Side by Spencer Quinn. Along with my review, I have a recipe for Green Tea and Apple Sorbet inspired by my reading and there is a tour-wide giveaway for a chance to win a copy of the book at the bottom of the post. 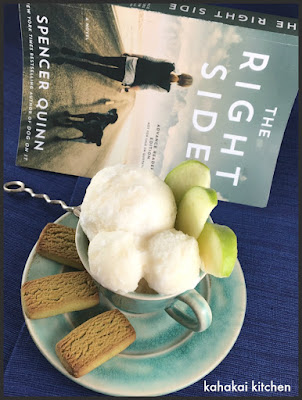 In this riveting new novel by the New York Times bestselling author of the Chet and Bernie mystery series, a deeply damaged female soldier home from the war in Afghanistan becomes obsessed with finding a missing girl, gains an unlikely ally in a stray dog, and encounters new perils beyond the combat zone.

LeAnne Hogan went to Afghanistan as a rising star in the military, and came back a much lesser person, mentally and physically. Now missing an eye and with half her face badly scarred, she can barely remember the disastrous desert operation that almost killed her. She is confused, angry, and suspects the fault is hers, even though nobody will come out and say it.

Shattered by one last blow—the sudden death of her hospital roommate, Marci—LeAnne finds herself on a fateful drive across the country, reflecting on her past and seeing no future. Her native land is now unfamiliar, recast in shadow by her one good eye, her damaged psyche, her weakened body. Arriving in the rain-soaked small town in Washington State that Marci had called home, she makes a troubling discovery: Marci’s eight-year-old daughter has vanished. When a stray dog—a powerful, dark, unreadable creature, no one’s idea of a pet—seems to adopt LeAnne, a surprising connection is formed and something shifts inside her. As she becomes obsessed with finding Marci’s daughter, LeAnne and her inscrutable canine companion are drawn into danger as dark and menacing as her last Afghan mission. This time she has a strange but loyal fellow traveler protecting her blind side.

Enthralling, suspenseful, and psychologically nuanced, The Right Side introduces one of the most unforgettable protagonists in modern fiction: isolated, broken, disillusioned—yet still seeking redemption and purpose—LeAnne takes hold of the reader and never lets go. 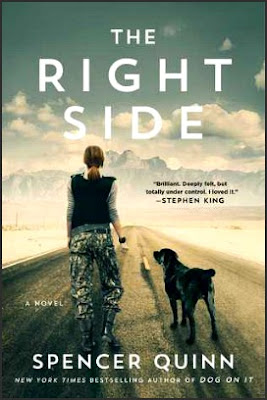 The Right Side was a bit of slow start for me, but I really ended up liking this book. I was expecting more of a suspenseful thriller and was surprised that so much of the book went by before getting to the suspense and even to the dog--who seems to adopt LeAnne. There is a lot of set up to define LeAnne as a character, but it works--I found myself invested in her and with her unpredictability from both the attack in Afghanistan and her own personality, I wanted to see what she was going to do next. She suffers from memory loss, is angry, has severe PSTD and is damaged in many different ways besides the physical damage to her eye and face. When she isn't angry, she is prickly and not always easy to like, but LeAnne is a fighter, very compelling, and she grew on me. Although the book ends up being just as much a character study of LeAnne as it is a mystery, there is her friend's missing daughter to consider, as well as what actually happened in Afghanistan--was LeAnne at fault for the mission going wrong? Once I was rooting for LeAnne and the tension began to ratchet up a few notches, I was hooked and didn't want to put the book down for the last third.

This is my first book from this author who has a popular (and I understand much lighter) adult mystery series about a dog and his human companion as well a dog-centered children's mystery series for middle graders. I would love another book about Leanne and her new companion and the end of this one seems to set it up nicely for a continuation so I'll keep my fingers crossed. The Right Side is not a light read, but it is an absorbing one, making it a good pick for your summer TBR stack if you like strong female characters, stories involving dogs, mystery/suspense books, and books about military veterans.

Author Notes: Spencer Quinn is the #1 New York Times bestselling author of the ongoing Chet and Bernie mystery series, as well as the bestselling Bowser and Birdie series for middle grade readers. He lives on Cape Cod with his wife Diana—and dogs Audrey and Pearl.

Keep up with him by visiting SpenceQuinn.com.

There's not a ton of food inspiration in The Right Side, but there is some. An obvious choice for a dish are the gingerbread men "with mint green eyes" that LeAnne remembers her mom making when she was a child. Trouble is, I don't like gingerbread and it's way too warm and humid to make me turn on an oven and bake. LeAnne exists on road food a lot in the book--mostly chocolate bars and chocolate milk and bacon burgers. She also eats a lot of sandwiches. There was mention of Apple Brown Betty, pears, potato chips, ice cream, a Chex-Mix-like snack mix at a bar, deviled eggs, a BLT, shrimp diablo, a Chinese restaurant, fried chicken, a cheeseburger, a tuna sandwich with a few sides, and soup, beer, vodka, peanut butter crackers, coffee and cream and a dinner of apple martinis, white wine, crab legs, pork chops and dessert. 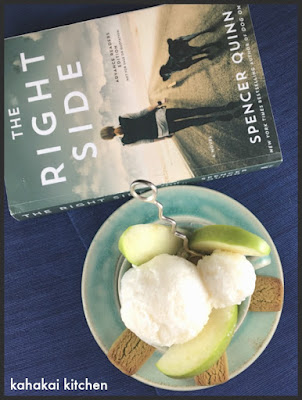 I ended up blending a few things together for my book-inspired dish. LeAnne tries green tea which at first "did nothing for her; then it was not bad; and after that, nice." Then there is a scene where LeAnne runs into an old boyfriend at a restaurant with his family and he asks her to sit down with them for dessert with homemade sorbets that his kids are addicted to--there were silver bowls at every place, "bearing little sorbet balls, green, orange, and white," as well as a basket of of brownies and cookies. LeAnne (charmer that she is at times) walks away with a handful of brownies and cookies. I decided to put the green tea and the apples from the Apple Brown Betty--in the form of apple juice and apple brandy into a simple, light and cooling  sorbet. 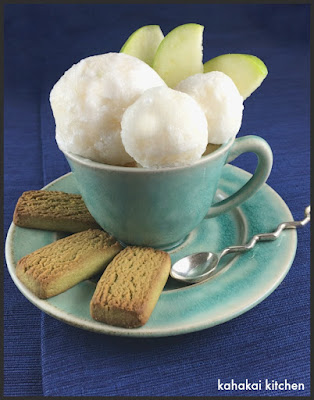 I wanted a very quick, very low effort sorbet without adding extra sugar so I just blended strongly brewed green tea with good quality fresh apple juice and added some Calvados (apple brandy) for additional flavor, lemon juice, and a frothed egg white. If you want a sweeter, stronger-flavored sorbet, cooking down apples with sugar, then pureeing them is probably the way to go and you can find lots of recipes online.

Mix the green tea and apple juice together, add the apple brandy and frothed egg whites and pour into the chilled bowl of an ice cream maker. Process according to ice cream maker instructions. 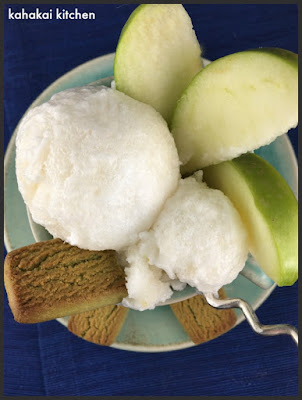 Place in freezer for at least an hour to finish firming up. Serve with apple slices and shortbread cookies if desired. If freezing for more than an hour, let sorbet sit for 7 to 8 minutes before scooping. 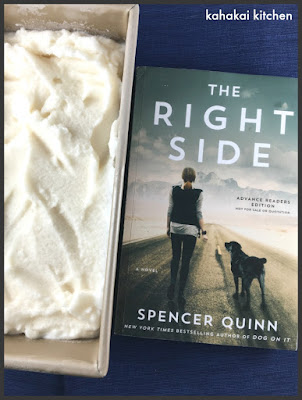 Notes/Results: There is more apple flavor in this sorbet than green tea--especially with the addition of the the calvados or apple brandy but the grassiness of the green tea is there in the background. Refreshing, not too sweet--you can add sweetener if you want but I found the apple juice sweet enough (I used Simply Apple brand). I read that the frothy egg white would make it less icy and I'm not sure that it did that much, so if you have raw egg fears, you could leave it out. When paired with the tart green apple slices and the buttery green tea shortbread and served in a tea cup, it makes a nice and cooling summer dessert or snack. I would make it again. 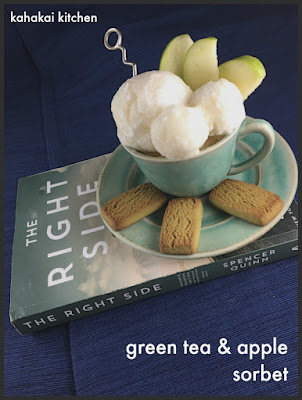 There is a tour-wide giveaway for the chance to win a copy of the book. Three copies will be given away and you can enter below.

Note: A review copy of "The Right Side" was provided to me by the publisher Atria Books and TLC Book Tours. I was not compensated for this review and as always, my thoughts and opinions are my own.