The Book Tour Stops Here: A review of "My Sister's Bones" by Nuala Ellwood, Served with a Recipe for Muhammara (Spicy Red Pepper Dip)

Today I'm happy to be on the TLC Book Tour for My Sister's Bones, a compelling and suspenseful psychological thriller by Nuala Ellwood. I love a good thriller and this one hits all my buttons. Along with my review, I am serving it up with a recipe inspired by my reading: Muhammara, a spicy red pepper dip that originated in Aleppo, Syria. 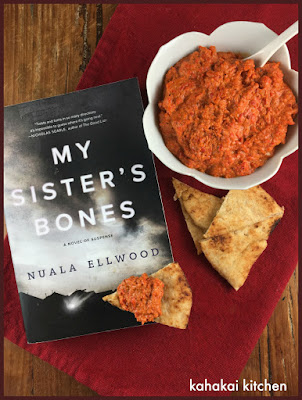 In the vein of Fiona Barton’s The Widow and Renée Knight’s Disclaimer, a psychological thriller about a war reporter who returns to her childhood home after her mother’s death but becomes convinced that all is not well in the house next door—but is what she’s seeing real or a symptom of the trauma she suffered in Syria?

The One Person You Should Trust Is Lying to You…

Kate has spent fifteen years bringing global injustice home: as a decorated war reporter, she’s always in a place of conflict, writing about ordinary people in unimaginable situations. When her mother dies, Kate returns home from Syria for the funeral. But an incident with a young Syrian boy haunts her dreams, and when Kate sees a boy in the garden of the house next door—a house inhabited by an Iraqi refugee who claims her husband is away and she has no children—Kate becomes convinced that something is very wrong.

As she struggles to separate her memories of Syria from the quiet town in which she grew up—and also to reconcile her memories of a traumatic childhood with her sister’s insistence that all was not as Kate remembers—she begins to wonder what is actually true…and what is just in her mind.

In this gripping, timely debut, Nuala Ellwood brings us an unforgettable damaged character, a haunting , humanizing look at the Syrian conflict, and a deeply harrowing psychological thriller that readers won’t be able to put down. 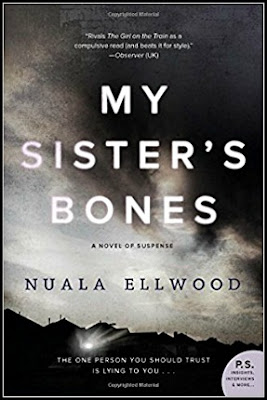 The unreliable female narrator is a common thing in novels the last few years and some books do it much better than others; My Sister's Bones is one of those books. Kate Rafter has been a decorated journalist and war reporter for the past fifteen years, covering war-torn Syria and suffering from PSTD from an incident involving a Syrian boy, that we slowly learn more about throughout the book. She has come home to Herne Bay, a seaside town in Kent, England to finalize her mother's affairs after her death. Kate was not informed in time to make the funeral, something she blames on her estranged and alcoholic sister, Sally. While staying at her mother's house, Kate hears and sees a little boy in the yard of the house next door who looks like he is in trouble or being abused. The woman next door, an refugee from Iraq, says she has no children and no one, especially the police, and since Kate has hallucinations and flashbacks, we are not sure if we believe her--in fact she doubts herself.

I really enjoyed this book--the pacing and twists and turns. I had my suspicions of some of what was happening midway through but the author had me guessing my theories all the way along and there were still surprises at the end. Kate was great character, flawed for sure but someone to root for even with her issues. In addition to the psychological scars from her work, Kate had a rough childhood with an alcoholic and abusive father. It is their childhood that initially drew Kate and Sally apart as they each had different relationships and experiences with their father and mother. Sally is a tough character to like, her alcoholism has cost her in many ways, not the least, her relationship with her teenage daughter, who left home and is out of contact with her. There are some triggers here for abuse, domestic violence, the terrors of war, etc. but nothing is glorified and it is handled well. Author Nuala Ellwod is the daughter of an award-winning journalist and it is his and other journalists' experiences with PSTD that inspired her to make it the theme of her book. The 400-ish pages flew by and I finished the book in a couple of sittings--not wanting to put it down until the mystery was solved. This book runs deeper than other suspense and psychological thriller with it's content and skillful writing. I'm amazed that it's a debut book and look forward to reading more from this talented author.

Author Notes: Nuala Ellwood is the daughter of an award-winning journalist. Inspired by her father’s and other journalists’ experiences with post-traumatic stress disorder, she gained Arts Council Funding for her research into the topic and ultimately made it the main theme of My Sister’s Bones, her debut psychological thriller.

There is not a lot of food inspiration to be found in the book but there are some mentions like, milk, butter, eggs and bacon, wine, beer, cake with lemon icing and buttercream filling, fish and chips, jammy doughnuts, coked chicken, salad leaves, cherry tomatoes, and dressing ingredients, seeded bread, coffee and a sandwich filled with orange stringy cheese, vegetable soup, hot tea, sandwiches and shortbread, tea and biscuits, cocoa, toast, lasagna, and egg and chips.

Since most of the food did not associate with happy memories, I had a bit of trouble deciding on a book-inspired dish. I ended up thinking about Syrian food since Kate spent so much time there and wanted people to understand the people and the conditions. I think food is a gateway to learning about people, customs and places that may be different from what we are used to. I was happy to find muhammara, a spicy red pepper dip that I enjoy and that originated in Syria and uses Aleppo peeper since I recently found it locally and bought a bottle. 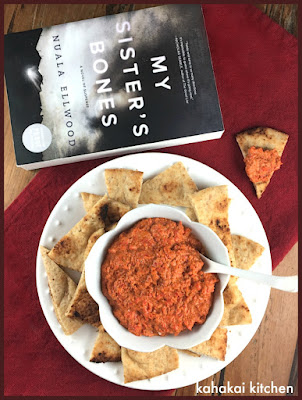 I chose a Yotam Ottolenghi recipe from his website and took some liberties with the preparation, mainly making it faster and easier to make for a busy weeknight. My changes to the recipe are in red below. 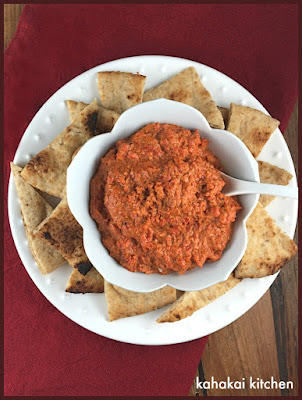 Ottolenghi says, "This classic Levantine dip can be made in a food processor, but it will lose some of its lovely texture; I'd use a pestle and mortar, if you can. Muhammara keeps well and even improves after a day in the fridge; just don't serve it fridge-cold. Serves four as a dip."

To Prepare Peppers: Heat the oven to 400 F. Put the peppers on a tray and roast for 30-35 minutes, turning occasionally, until they are cooked and the skin is blackened--or roast them over the flame on a gas stove. Put the peppers in a bowl, cover with cling-film and, once cool enough to handle, peel and discard the skin and seeds.

Pat the peppers dry, and place in a mortar. Add the breadcrumbs, lemon juice, molasses, cumin, chili and garlic. Work this with a pestle until well combined, but not so much that the peppers no longer have a noticeable texture. Stir through the walnuts, a quarter-teaspoon of salt and the olive oil. Add more pomegranate molasses and salt to taste – you want the flavors to be pretty intense. (Deb says, "I was lazy and used the food processor. I put the bread crumbs, walnuts and garlic in and processed until walnuts were finely chopped and bread finely crumbed, then added the roasted red peppers and other ingredients and pulsed until not to smooth--leaving some pepper pieces.)

Spoon the dip into a shallow bowl, using the back of a spoon to give it a wavy texture, and drizzle with a little olive oil. Serve at room temperature. 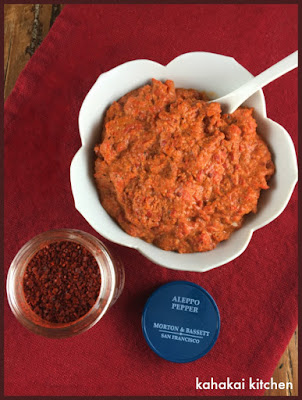 Notes/Results: I've had muhammara before, I've made it too, although apparently I've never posted it since I couldn't find it ;-) but, this one from Ottolenghi was extra tasty--even though I did the cheat's version of buying roasted red pepper from the deli and using the food processor, instead of the recommended mortar and pestle. (There are days for that and there are days to do it the easy way and today was definitely a need-to-do-it-easy kind of day.) I attribute it to the Aleppo pepper which has a sweet and almost tangy heat to it. You feel the warmth at the back of your throat at the end. The pomegranate molasses also adds good flavor. I toasted a whole wheat naan bread as the store didn't have good pita, but this dip would also be good with baguette slices, vegetables, or crackers. It would also make a nice sandwich spread. I will happily make it again. 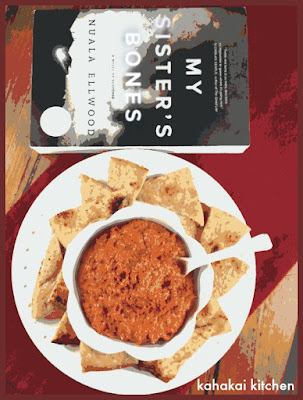 I am linking this Ottolenghi recipe up to I Heart Cooking Clubs where this week is Potluck week--our chance to make any recipe from our current IHCC chef or any of the past IHCC featured chefs. 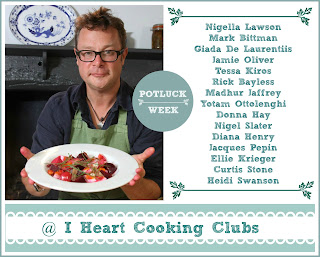 I'm also linking it up to the Weekend Cooking event at Beth Fish Reads, a weekly event that is open to anyone who has any kind of food-related post to share. For more information, see the welcome post.

Note: A review copy of "My Sister's Bones" was provided to me by the publisher Harper Collins and TLC Book Tours. I was not compensated for this review and as always, my thoughts and opinions are my own.