The Book Tour Stops Here: A Review of "The Gypsy Moth Summer" by Julia Fierro, Served with Shrimp Cocktail with Lemon-Tarragon Vinaigrette

I'm excited to be a stop today on the TLC Book Tour for The Gypsy Moth Summer, a novel by Julia Fierro. I'm pairing my book review with an tasty appetizer of Shrimp Cocktail with Lemon-Tarragon Vinaigrette inspired by my reading, and there is a giveaway for a copy of the book at the bottom of the post. 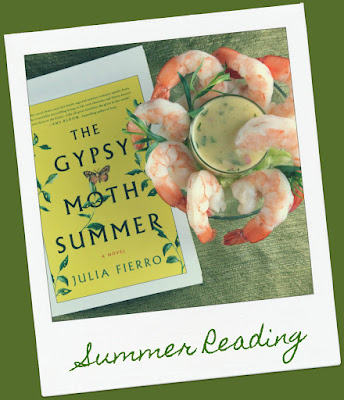 It is the summer of 1992 and a gypsy moth invasion blankets Avalon Island. Ravenous caterpillars disrupt early summer serenity on Avalon, an islet off the coast of Long Island–dropping onto novels left open on picnic blankets, crawling across the T-shirts of children playing games of tag and capture the flag in the island’s leafy woods. The caterpillars become a relentless topic of island conversation and the inescapable soundtrack of the season.

It is also the summer Leslie Day Marshall–only daughter of Avalon’s most prominent family–returns with her husband, a botanist, and their children to live in “The Castle,” the island’s grandest estate. Leslie’s husband Jules is African-American, and their children bi-racial, and islanders from both sides of the tracks form fast and dangerous opinions about the new arrivals.

Maddie Pencott LaRosa straddles those tracks: a teen queen with roots in the tony precincts of East Avalon and the crowded working class corner of West Avalon, home to Grudder Aviation factory, the island’s bread-and-butter and birthplace of generations of bombers and war machines. Maddie falls in love with Brooks, Leslie’s and Jules’ son, and that love feels as urgent to Maddie as the questions about the new and deadly cancers showing up across the island. Could Grudder Aviation, the pride of the island–and its patriarch, the Colonel–be to blame?

As the gypsy moths burst from cocoons in flocks that seem to eclipse the sun, Maddie’s and Brooks’ passion for each other grows and she begins planning a life for them off Avalon Island.

Vivid with young lovers, gangs of anxious outsiders; a plotting aged matriarch and her husband, a demented military patriarch; and a troubled young boy, each seeking his or her own refuge, escape and revenge, The Gypsy Moth Summer is about love, gaps in understanding, and the struggle to connect: within families; among friends; between neighbors and entire generations. 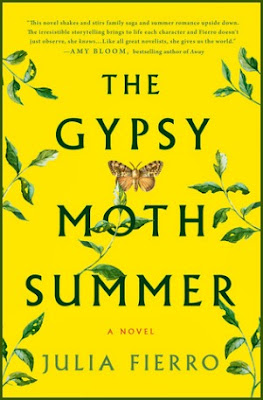 Note to self: Don't book a trip to Avalon Island, off the coast of Long Island, especially when there is a gypsy moth invasion. Yuck and double yuck! I learned a bit more about gypsy moths, their habits, noise, and their unending excrement than I really wanted to in this book--although it certainly helped to build a tense and seething atmosphere for the story. If you think that the gypsy moths sound bad, you haven't met the citizens of Avalon Island, a community full of dark secrets and neighbors who are comprised of the haves and the have-nots and who all have some very racist views and prejudices in common. Tensions are already high when Leslie Day Marshall moves back to town with her biracial family after her mother's death. There's the gypsy moths covering every surface, trouble with Grudder Aviation--the main employer of the community, and a rash of cancers that have struck both young and old. Leslie's husband Jules, is an African-American landscape architect who is leery of being on the overtly WASP-y island and concerned about the safety of his children--teenage Brooks and little Eva, but also anxious to get his hands on the garden around Leslie's family home, known as "The Castle."

The Gypsy Moth Summer is set in 1992 and the author pulls in many of the signs of the times with the foods, music, movies, styles, and current events that I found enjoyable to read and think back on. The story is told primarily from five points of view--Leslie and Jules, Maddie, a local teen and their neighbor, Veronica, Maddie's grandmother, and Dom, her brother. There are also quite a few secondary characters--Maddie's circle of friends, Leslie and Jules's son Brooks, Maddie's parents and cousins, and The Colonel--Veronica's husband and Maddie's grandfather. Everyone seems to be dealing with something or keeping something secret--from domestic violence and abuse, health and mental health issues, drugs and addiction, bullying, and sexuality. Combine all that with battling the rampant caterpillars and the environmental issues caused by the aviation factory and Avalon Island is pretty messed up. It's also a lot of people and issues to keep track of, but the author does a good job in weaving everything together. I found myself immediately attaching to and liking Maddie and Jules, however the other main characters are not as deeply drawn, or as likable and their motivations are not as clear. With some of the characters and situations (and the gypsy moths), the book is a bit like a train wreck--you want to look away but you just can't, and while I may not have liked them, I did want to know what happened to everyone. This made the 400 pages fly by rather quickly--the pacing mostly worked for me although I found the ending to be somewhat abrupt.

The Gypsy Moth Summer is not a light and happy summer read, it covers some dark subjects, is thought provoking, and it made me uncomfortable at times. It won't appeal to everyone--there is sex and drug use and some instances of violence, but if you like a deeper read for your summer book stack, it's a worthy addition.

Author Notes: Julia Fierro is the founder of The Sackett Street Writers’ Workshop, a creative home to more than 4,000 writers in New York City, Los Angeles and online. Her first novel Cutting Teeth, was praised by The Boston Globe (“at once modern and timeless”) and The New Yorker (“a comically energetic début”). A graduate of the Iowa Writer’s Workshop, Julia lives in Brooklyn and Los Angeles.

There was a lot of food mentioned in The Gypsy Moth Summer, everything from common snack foods and beverages of the 90s to more elegant country club and society party fare. Examples include: candy and caramel apples, chicken wings, cotton candy, zeppole balls, pizza and hero sandwiches at a carnival, roast chicken with lemons, Chinese takeout, pastries and espresso, cheese fries, mention of the Feast of the Seven Fishes with sardines, squid, octopus, baccala--cod, heart-shaped flapjacks, chocolate babka, spaghetti with marinara fried zucchini, Wonder Bread, pot roast, corned beef brisket, Sarah Lee pound cake with Cool Whip, swirled pink and green sherbet, peaches, sweet corn, raspberries and blueberries, strawberry-rhubarb pie, and chicken cutlet sandwiches. There was a progressive dinner with appetizers of smoked salmon, whitefish salad, chicken liver pate, and multiple kinds of savory cheese puffs, a main course of filet Mignon, biscuits, and gravy "to die for," and desserts of Red velvet cake, coffee cake, tiramisu, mint green petit fours, brownies, blondies and eclairs. There were Cool Ranch Doritos, ham and cheese Hot Pockets, mini egg rolls, Little Debbie oatmeal cream pies, and kiwi-strawberry Snapple, and an afternoon tea of Harrod's oolong tea, cucumber and other assorted tea sandwiches, and chocolate-covered bananas, strawberries and marshmallows. I'll stop here but I could go on and on with the food, not to mention all of the alcohol and cocktails like martinis and Manhattans, strawberry coolers, mimosas and rum and cokes--to name just a few. 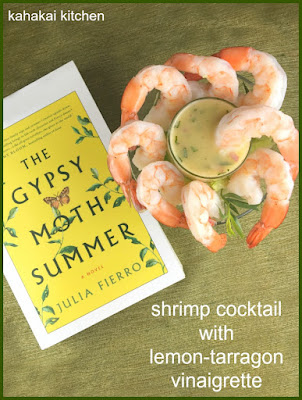 For my book-inspired dish, I decided to go with the popular party, buffet, country club appetizer of shrimp cocktail. It was mentioned a couple of times in the book--including a society matron standing at the buffet with, "A jumbo shrimp tail stuck out of her mouth." Even though shrimp or prawn cocktails have been around for decades, I am never unhappy to find a platter or shrimp and a zesty sauce at a party. I had a bag of jumbo wild shrimp in my freezer and looked online to see if there was something more exciting than the usual red cocktail sauce. I found a recipe for shrimp cocktail with a Lemon-Tarragon Vinaigrette and thought it sounded good--and it even matches the colors of the book cover a bit.

Just serve with cooked jumbo shrimp--you can boil of grill the shrimp yourself, or buy them already cooked. Here's a simple recipe for a party-sized platter of shrimp for shrimp cocktail. 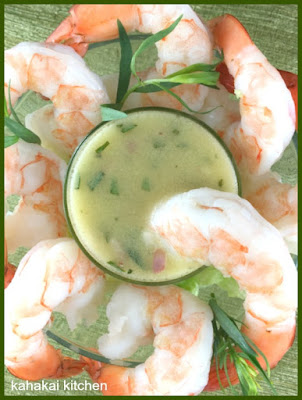 Lemon-Tarragon Vinaigrette
From Alison Attenborough via BonAppetit.com
(Makes about 3/4 of a cup of dressing)

Combine lemon juice, shallot, tarragon, and Dijon mustard in a small bowl. Gradually whisk in oil. Season to taste with salt and pepper.

Serve with cooked shrimp, de-shelled and de-veined, tail left on. Extra dressing can be stored, tightly-covered, for about a week in the fridge.

Do Ahead Tip: Vinaigrette can be made 3 days ahead. Cover and chill. 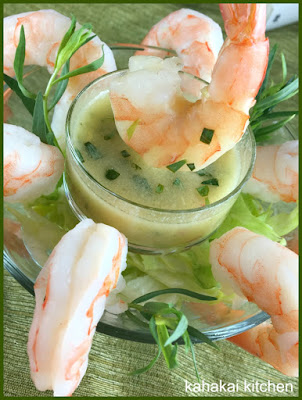 Notes/Results: I love both lemon and tarragon, so this sauce was perfect for me. The bright and tangy lemon flavor and cooling, bittersweet tarragon worked well with the sweet shrimp and the leftover vinaigrette will make a great dressing too. I find it a nice change from the classic. If you are a shrimp cocktail 'purist'-you could serve this dressing alongside a classic red shrimp cocktail sauce as another option, and if you aren't a shrimp fan, you could use this sauce as a salad dressing or a dip for raw  or grilled vegetables. I will definitely make it gain. 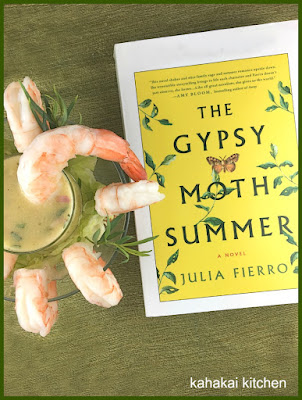 Note: A review copy and a giveaway copy of "The Gypsy Moth Summer" was provided to me by the publisher, St. Martin's Press, and TLC Book Tours. I was not compensated for this review and as always, my thoughts and opinions are my own.

The publisher is generously providing a copy of The Gypsy Moth Summer to give away (U.S./Canada addresses only, please) here at Kahakai Kitchen.

To enter the Rafflecopter Giveaway below, leave a comment (Because I like to read them!) ;-) telling me your favorite food from the 90s or your favorite party appetizer.
There are a couple of other optional ways to get more entries to win: 1) Tweet about this giveaway or 2) follow me on Twitter (@DebinHawaii) and/or Author Julia Fierro (@JuliaFierro), and/or Publisher St. Martin's Press (@StMartinsPress) on Twitter. (Note: You can still get extra entries even if you already follow me, the author, or publisher on Twitter.)