The Book Tour Stops Here: A Review of "The Orphan's Tale" by Pam Jenoff, Served with Oatmeal (Porridge) with Caramelized Bananas

It is such a blustery, rainy Wednesday here. Perfect for curling up with an engrossing book like The Orphan's Tale by Pam Jenoff and a warm and hearty breakfast. I'm reviewing this touching World War II historical novel today and pairing my review with a recipe for Oatmeal (Porridge) with Caramelized Bananas, inspired by my reading. 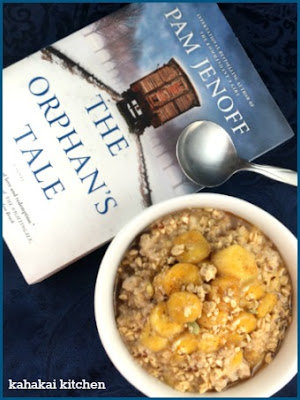 A powerful novel of friendship set in a traveling circus during World War II, The Orphan’s Tale introduces two extraordinary women and their harrowing stories of sacrifice and survival.

Sixteen-year-old Noa has been cast out in disgrace after becoming pregnant by a Nazi soldier and being forced to give up her baby. She lives above a small rail station, which she cleans in order to earn her keep… When Noa discovers a boxcar containing dozens of Jewish infants bound for a concentration camp, she is reminded of the child that was taken from her. And in a moment that will change the course of her life, she snatches one of the babies and flees into the snowy night.

Noa finds refuge with a German circus, but she must learn the flying trapeze act so she can blend in undetected, spurning the resentment of the lead aerialist, Astrid. At first rivals, Noa and Astrid soon forge a powerful bond. But as the facade that protects them proves increasingly tenuous, Noa and Astrid must decide whether their friendship is enough to save one another—or if the secrets that burn between them will destroy everything. 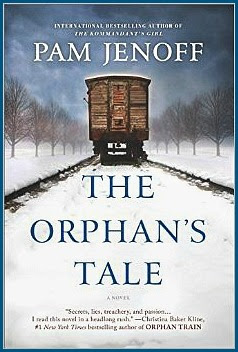 World War II is my favorite era for historical fiction and I have a passion for circus stories, so pairing them together in one book is pretty much like catnip for me. It's never easy to read books set in such a dark time in history, but I found myself immediately caught up in the story; the details of circus life during the war, the acts under the Big Top, and the way that the circus family looks out for and protects its members--putting everyone at great risk but doing it because it is the right thing to do. The storytelling in The Orphan's Tale alternates between Noa and Astrid, both strong and brave women, who sucked me in with their stories. Noa is the character that I attached myself to the most, she is still a child herself when her world shatters, but she has the courage and tenacity to save Theo and to fight for both of their lives. Astrid is prickly and harder to connect with, but her backstory is more deeply drawn and compelling and although she is reluctant to become close to anyone after all she has lost, she finds herself pulled to and fighting for Noa and Theo. The thing about World War II stories is that you know that things are not going to be happy, or turn out well for all of the characters you have become attached to and The Orphan's Tale is no exception. I read it with my heart in my throat, anticipating and dreading what was sure to come and it brought out all of the feels-making it hard to put down and a bit emotionally exhausting, but worth all of the emotions.

This is the first book of Pam Jenoff's that I have read--although I have The Kommandant's Girl downloaded on my Kindle and reading The Orphan's Tale is going to move it up my TBR list. I enjoyed her rich storytelling and all of the details about her characters and settings--it is clear she does her research and vividly brings it all to life. Readers who love historical fiction, the WWII time period, circus-set stories and books that touch the heart will love this one--I certainly did.

As it is set in Germany and France during the second World War, food is not particularly plentiful or a focus but there was food in The Orphan's Tale. There were several mentions of breakfast foods like sausage, eggs, toast, rice cereal, porridge, fresh milk, coffee, and orange juice. There was a lot of bread and cheese, or sandwiches of cheese between pieces of brown bread. There was the smell of candy floss and boiled peanuts from the circus and a beer hall tent. There was a roast and gravy dinner and the smell of garlic from Coq Au Vin, contrasted with a watery stew of meat and turnips and onions. There were mentions of chocolate, madeleines, an orange and strawberries--too mottled and green to be ripe, Cognac, Champagne, and little trays of appetizers that were rations arranged to look grand. 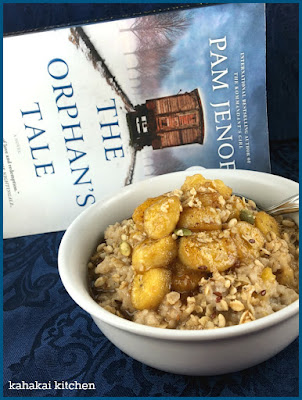 I found my inspiration in a banana. It caught my attention that a banana would be in France during WWII but they were imported to Europe, on ships before the war and it became especially difficult to get once rationing began.

"I'm going into town," I say to Astrid. I hold Theo on my lap, spoon-feeding him the last of his lunch. It is a banana--a rare find by one of the kitchen workers--that I had mashed together with a bit of milk. When Theo first tasted it, his eyes widened with surprise and he gurgled at the unfamiliar richness, so different from the usual bland porridge. Good food for Theo is scarce, since I cannot register him for a ration card without raising questions. So I give him whatever I have for myself to eat that is suitable."

For my book-inspired dish, I decided to use the banana as a topping for porridge--in this case oatmeal. I confess that although I try to eat oatmeal regularly--usually cold as overnight oats or muesli, it's not a favorite breakfast of mine (I think it's a texture thing) so I look for ways to doctor it up and make it more appealing. Caramelizing the bananas and using them as a topping seemed like a great way to do it. I found a recipe at Pinch of Yum that used coconut oil and maple syrup and made my oats with coconut milk, making this a vegan dish. I forgot to buy slivered almonds so I sprinkled the top with a little flax seed granola for crunch. So this is definitely a more modern, updated porridge than would have been found in those days, but I wanted something that would tempt me. ;-)

I made a couple of very small changes to the recipe--noted in red below. 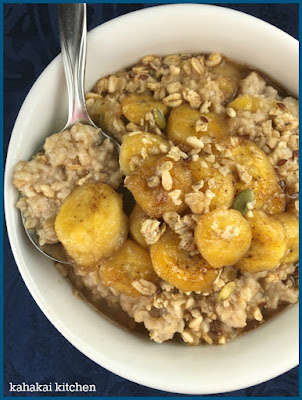 Cook the oatmeal according to package directions in coconut milk, or milk of choice.

Meanwhile, heat the coconut oil in a skillet over medium heat. Add the maple syrup, salt, cinnamon, and vanilla, and heat until the mixture is lightly bubbling. Add bananas and cook for a few minutes on each side until the bananas are soft and plump.

Remove pan from heat. Stir half of banana mixture & syrup into the oatmeal. Divide oatmeal between two bowls and top with the remaining bananas and a sprinkle of granola, nuts, or any other topping you like. Enjoy! 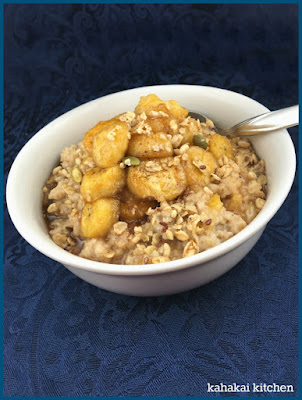 Notes/Results: This topping could make me eat oatmeal more often. ;-) The maple syrup and soft, creamy bananas really perk up the oatmeal. Cooking the oats in unsweetened coconut milk makes them rich and stirring part of the bananas and their syrup into the oats flavors them throughout. Since both oatmeal and bananas have a soft (some would say mushy) texture, adding the sprinkle of granola on top was a nice contrast. It actually made me happy to eat a bowl of oats. These bananas would also be excellent on top of French Toast or even ice cream. If you don't like bananas, you could use apples or pears instead. I would definitely make these again. 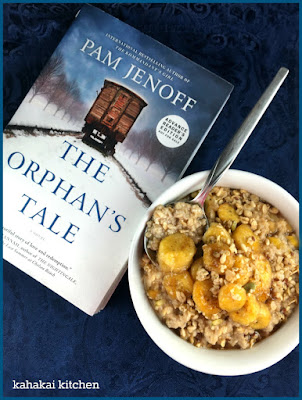 Note: A review copy of the "The Orphan's Tales" was provided to me by the publisher, and TLC Book Tours. I was not compensated for this review and as always, my thoughts and opinions are my own.