The Book Tour Stops Here: A Review of "Sisters, One, Two, Three" by Nancy Star, Paired with a Recipe for Tangy Lemonade Sorbet

It's my first TLC Book Tour of 2017 as I review Sisters, One Two, Three by Nancy Star and if cold, winter weather has you down, you can conjure up some sun at the beach with this recipe for Tangy Lemonade Sorbet inspired by my reading. 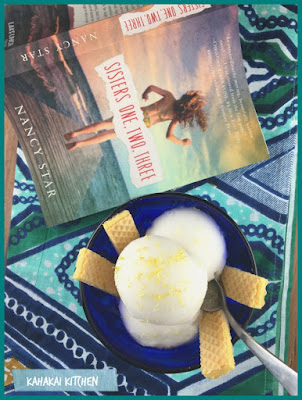 After a tragic accident on Martha’s Vineyard, keeping secrets becomes a way of life for the Tangle family. With memories locked away, the sisters take divergent paths. Callie disappears, Mimi keeps so busy she has no time to think, and Ginger develops a lifelong aversion to risk that threatens the relationships she holds most dear.

When a whispered comment overheard by her rebellious teenage daughter forces Ginger to reveal a long-held family secret, the Tangles’ carefully constructed web of lies begins to unravel. Upon the death of Glory, the family’s colorful matriarch, and the return of long-estranged Callie, Ginger resolves to return to Martha’s Vineyard and piece together what really happened on that calamitous day when a shadow fell over four sun-kissed siblings playing at the shore. Along with Ginger’s newfound understanding come the keys to reconciliation: with her mother, with her sisters, and with her daughter.

At turns heartbreaking, humorous, and hopeful, Sisters One, Two, Three explores not only the consequences of secrets—even secrets kept out of love—but also the courage it takes to speak the truth, to forgive, and to let go. 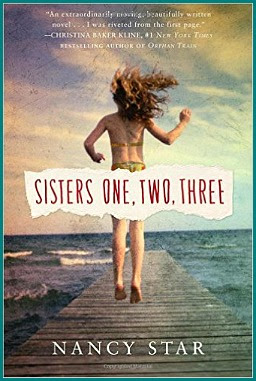 The Tangle family is aptly named in Sisters One, Two, Three as they have quite a tangle of family secrets, before and especially after an accident during a family vacation to Martha's Vineyard in the 1970s. The book takes up decades later. told mainly by Ginger Tangle, the oldest sister, a school nurse, wife and mother of a seventeen-year-old daughter. Ginger is cautious and fearful of something happening--especially to her daughter Julia, who she incessantly smothers with her attentions. Ginger also cares for her mother Glory, stopping by her house nearly everyday, running errands and buying her puzzles. Glory, a former actress in community theater who was a bigger star in her head than real life, is fading with age and having episodes of dementia. Middle sister Mimi is wealthy, married to a doctor, busily runs her family of three boy and a large number of in-laws, and has taken up quilting in her art studio. As for Callie, the youngest Tangle, she has been apart from the family for years, having been at a boarding school and then purportedly joining a cult of some sort, according to Glory. Moving back and forth between present day and the summer of the accident, the Tangles' secrets are slowly but surely uncovered including what really happened on the beach the day they lost their brother.

I found myself quite caught up in the story and the family drama of the Tangles--there is so much drama and so much angst. It was difficult at first to get a handle on and relate to the characters. After seeing the way she grew up and how she tried to keep things running smoothly as the eldest child with a mother of such mercurial temperament, I could understand where Ginger's worries and caution came from--but she got very annoying at times. Glory was quite a piece of work and a challenge to like at all, based on her actions--especially when the children were growing up. Mimi and especially Callie, we don't get quite as deep a picture of, so they are hard to get to know. As more of the family secrets come to light, I got a better understanding of all of the characters and the reasons behind their actions. There are quite a few twists in the story--some I saw coming, others took me by surprise and by the end, I wanted to spend more time with the Tangle sisters. While not every question I had was answered, I was ultimately satisfied and enjoyed this well-told look at how our families and the experiences we share with them can shape us in different ways and for all of our life. If you like novels that deal with family relationships and drama--especially sisters, you will likely enjoy this one. Although it is her fifth book, Sisters One, Two, Three is the first book I have read by this author, but I doubt it will be my last.

Author Notes: Nancy Star is the author of four previous novels: Carpool Diem, Up Next, Now This, and Buried Lives. Her nonfiction writing has appeared in the New York Times, Family Circle, Diversion magazine, and on the web. Before embarking on her writing career, Nancy worked for more than a decade as a movie executive in the film business, dividing her time between New York and London. She has two grown daughters and a son-in-law and now lives in New Jersey with her husband.

There was food in Sisters One, Two, Three, although most of it was not too inspiring when it comes to things I wanted to recreate. Glory was not much of a cook with dishes like Miracle Meatloaf, Scooter Pies with a birthday candle, and Tuna Tempter (a casserole of tuna flakes, condensed mushroom soup, and wagon-wheel pasta--which the only way to get down was "douse it with salt, close your eyes and swallow.) There were Salisbury steak TV dinners, Lillian Hellman-style Corn Flakes (which according to Glory meant two teaspoons of sugar in each bowl), hot dogs and buttered corn, and a present-day scary Thanksgiving dinner including deviled eggs with yolks crusted over, limp asparagus, canned gravy and uncooked cranberries and under-cooked turkey-Glory's lack of care and cooking combined with her progressive dementia. Ginger cooked basics like potatoes, chicken, pasta and tomato sauce while Mimi preferred Whole Foods and things like black-eyed peas pate, organic beet-leaf pasta served with grass-fed bison bolognese and goat cheese-oat truffle crepes. At the beach there were clam and fry shacks, lobster rolls, fried shrimp and shrimp on skewers, huckleberries, pizza and ice cream. 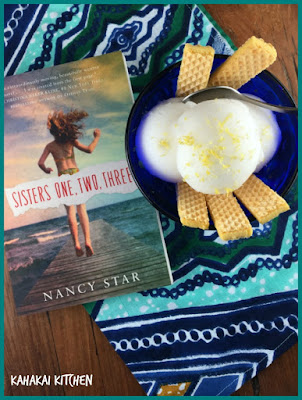 For my book-inspired dish, I decided to go with a combination of the ice cream that was mentioned several times and mix it up with lemonade, because of a comment from Mimi to Ginger about her worrying, "Why do you always make lemons out of lemonade?" I decided to make my lemons into in lemonade-inspired sorbet (I wanted something dairy-free and tangier than a creamy ice cream after all of the holiday indulgence.)

If the weather is mild where you are, this sorbet will compliment it, or if it's cold and you are dreaming of a warm summer, this sorbet will make you feel like sunny days are ahead. I left it a bit tangy and paired it with store-bought lemon wafers. 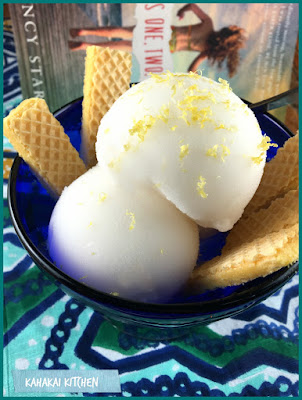 Prepare your ice cream maker by chilling the bowl/drum for at least 24 hours before making sorbet.

In a small saucepan over medium heat, combine the water and sugar and bring to a boil, cooking and stirring until the sugar completely dissolves (about 1-2 minutes). Remove pan from the heat and allow to it  cool for 10 minutes. Stir in the fresh lemon juice, limoncello and lemon zest and place sorbet mixture into the refrigerator to chill for at least 4 hours.

Pour chilled sorbet mixture into the bowl of an ice cream maker. Churn according to manufacturer instructions, usually about 25-30 minutes. When the sorbet has frozen into ice crystals and is pulling away from the sides of the ice cream maker, transfer sorbet to a sturdy storage container, cover tightly, and freeze it until firm and ready to scoop. Serve with a bit of extra lemon zest on top and with lemon cookies. 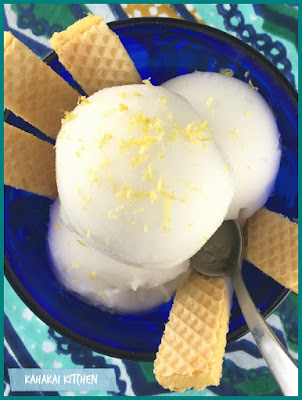 Notes/Results: Refreshingly tart and lemony, I like my sorbet on the tangy side to pair with the sweet cookies and this one is a good balance for me but if you like a sweeter sorbet, you can increase the sugar by another 1/4 to 1/2 cup, depending on your tastes.  You can also leave out the limoncello, but it does make it a softer, creamier texture so I like to leave it in. Simple and delicious, I will happily make it again. 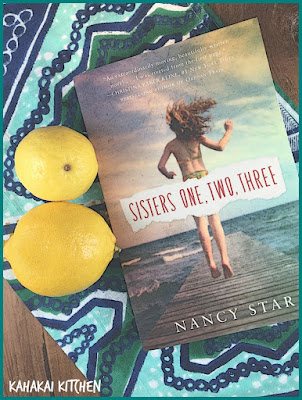 Note: A review copy of "Sisters, One, Two Three" was provided to me by the publisher and TLC Book Tours. I was not compensated for this review and as always, my thoughts and opinions are my own.