Most of us have at least one good road trip story in our history but most of us probably didn't make that journey with a pet alligator and a mysterious rooster along for the ride. Today's TLC Book Tour stop takes us on an epic and fantastical road trip with Carrying Albert Home: The Somewhat True Story of a Man, His Wife, and her Alligator by Homer Hickam. Served up with my review is a plate of Fried Potato Pancakes and Old Bay Boiled Shrimp inspired by the book. 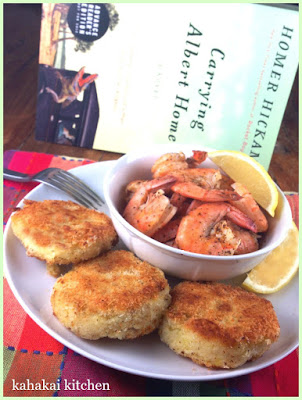 Elsie Lavender and Homer Hickam Sr.—the future parents of Homer Hickam Jr.—were high school classmates in the West Virginia coalfields, graduating just as the Great Depression began. When Homer asked for her hand, Elsie instead headed to Orlando where she sparked with a dancing actor named Buddy Ebsen (yes, that Buddy Ebsen). But when Buddy headed for New York, Elsie’s dreams of a life with him were crushed and eventually she found herself back in the coalfields, married to Homer.

Unfulfilled as a miner’s wife, Elsie was reminded of her carefree days in Florida every day because of Buddy’s unusual wedding gift: an alligator named Albert who lived in the only bathroom in their little house. Eventually Homer gave Elsie an ultimatum: “Me or the alligator!” After giving it some thought, Elsie concluded there was only one thing to do—carry Albert home.

Carrying Albert Home tells the sweet, funny, and sometimes heartbreaking tale of a young couple and their special pet on a crazy 1,000-mile journey. Told with the warmth and down-home charm that made Rocket Boys a beloved bestseller, Homer Hickam’s rollicking novel is truly a testament to that strange and marvelous emotion we call love. 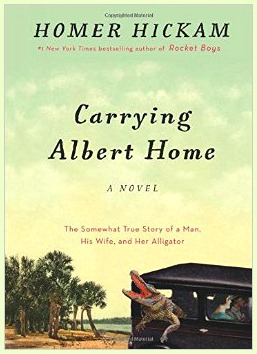 This is the first book from Homer Hickam that I have read but I intend to read more. Carrying Albert Home is a fun read and has a good bit of the madcap to it with the many, often outlandish, adventures that Homer and Elsie have. I happen to love the screwball comedy films of the 1930s and 1940s and the story felt like a cross between two of my favorites--It Happened One Night (zany road trip romance) and Bringing Up Baby (the challenges of an exotic 'pet'--although Baby was a leopard). I have never found alligators to be particularly appealing before, but Albert was downright lovable--laying on his back to have his belly scratched, his frequent grins, and the happy yeah-yeah-yeah sound he made. He and the unnamed rooster (who showed at the first stop and stayed throughout the trip) were my favorite characters in the book. Homer Sr. is likable, although I got frustrated with how much he kowtowed to, and put up with Elsie. I struggled with Elsie throughout the book, not liking how she treated Homer and how much she seemed to resent him although she pretty much knew what she was signing up for when she married a coal miner. I found her most redeeming feature to be her love for Albert, but as she softened toward Homer as the book progressed and started treating him better, I began to like her more and to admire her spirit.

There is a sweet earnestness to Carrying Albert Home and it is easy to get caught up in the storytelling. Since it is billed as similar to Big Fish and some of the stories are pretty crazy, you aren't sure just how much of it is true and how much is "tall tales"--but you find yourself suspending disbelief, happily climbing in the backseat of the Hickam's Buick touring car with Albert (and the rooster), and just going along for the ride--and what a wild ride it is. Unique and entertaining, it made me chuckle and it managed to make me tear up a few times too.

Author Notes: Homer Hickam (also known as Homer H. Hickam Jr.) is the bestselling and award-winning author of many books, including the #1 New York Times memoir Rocket Boys, which was adapted into the popular film October Sky. A writer since grade school, he is also a Vietnam veteran, a former coal miner, a scuba instructor, an avid amateur paleontologist, and a retired engineer. He lives in Alabama and the Virgin Islands. 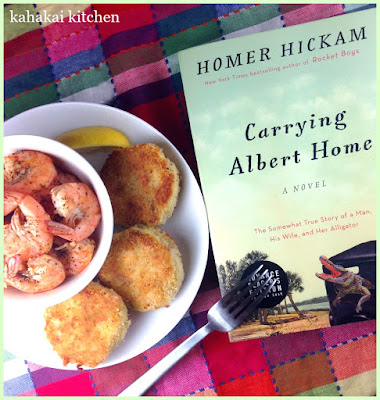 It's 1935, six years into the great depression, and the story takes place mostly on the road--so most of the food mentioned in Carrying Albert Home is simple fare--sandwiches, chicken for Albert, eggs, fruit, baked bread, veggies, and home-canned goods from Elsie's mother. Two meals caught my eye (or stomach); a dinner with Ernest Hemingway consisting of succulent dolphin fish, spiced beans, rice, and cornbread, and Elsie frying up potato pancakes and stirring a big, bubbling pot of shrimp at Captain Oscar's Boarding House in South Carolina.

Having some Yukon Gold potatoes on hand and frozen wild shrimp in the freezer, I decided to make potato cakes and to steam/boil a few shrimp in Old Bay seasoning. Most of the Southern-style potato cake mentions and recipes I found online were made from mashed potatoes so that's what I used. (Also the book mentions Elsie "spooning a dollop of grease in a frying pan" with a lumpy slurry in a nearby bowl that made the author suspect that she was making her 'famous fried potato cakes' for supper. Sounds like mashed potato cakes to me.) For the shrimp, I just followed the recipe on the back of the Old Bay Seasoning container--beer, vinegar, and Old Bay. I added a bit of Old Bay to my potato cakes as well for a little extra flavor. 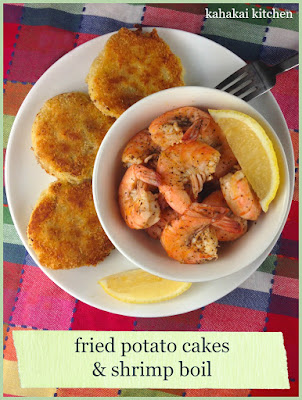 In a bowl, combine mashed potatoes, 1 cup of the breadcrumbs, the beaten egg, garlic, Old Bay and salt and black pepper (to taste--depending on the seasoning in your mashed potatoes).

Place the remaining 1/2 cup of panko on a plate. Form the potatoes mixture into 3-inch-ish patties and dredge in the panko--ensuring the cakes are covered well.

Coat a large frying pan with the canola oil and heat over medium-high. When pan is hot, add about half of the cakes, making sure not to crowd them. Cook cakes about 2 1/2 to 3 minutes per side, until browned and warmed through. Repeat until all potato cakes are cooked. Sprinkle with a little more black pepper and serve hot. 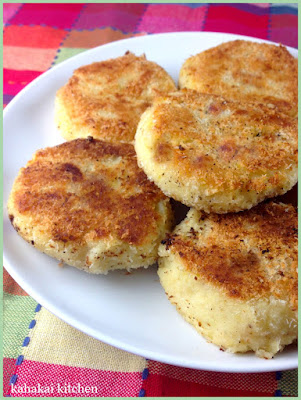 Notes/Results: Crispy on the outside, creamy mashed potatoes inside, these are delicious little cakes, homey and comforting. I was happy with my Yukon gold mashed potatoes and the garlic and a touch of Old Bay seasoning gave them even more flavor. I liked them with the peel-and-eat shrimp, but they were also pretty wonderful topped with shredded cheddar cheese for breakfast the next day. ;-) Quick, easy, and a great way to use up mashed potatoes, I would happily make them again. 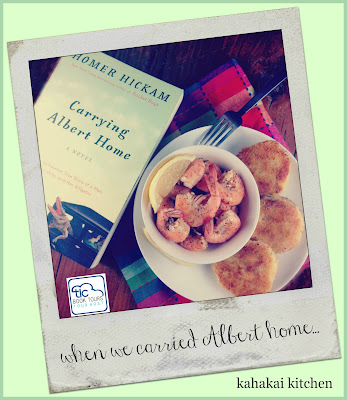 Note: A review copy of "Carrying Albert Home" was provided to me by the publisher and TLC Book Tours in return for a fair and honest review. I was not compensated for this review and as always my thoughts and opinions are my own.