The Book Tour Stops Here: A Review of "The Visitant" by Megan Chance, Served with Creamy Polenta with Parmesan, Pecorino, & Buttery Pine Nuts

October is a wonderful month for reading atmospheric Gothic tales, so I am excited to be a stop on the TLC Book Tour for The Visitant: A Venetian Ghost Story by Megan Chance. Along with my review of this novel is a recipe for a creamy Polenta with Parmesan, Pecorino & Pine Nuts, inspired by the book. 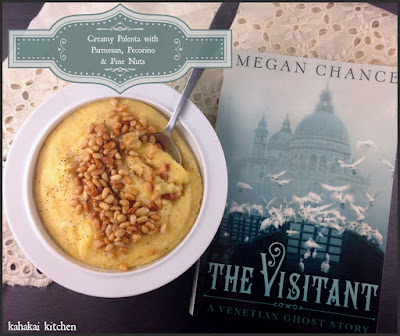 The shadows of Venice have long inspired writers—from Henry James and Thomas Mann to Daphne DuMaurier and Ian McEwan. Now, its Megan Chance’s turn, as the acclaimed novelist takes readers through the alleys and canals of this ageless and mysterious city in her compelling new book, The Visitant: A Venetian Ghost Story (Lake Union Publishing; September 22, 2015). Part haunted tale, part love story, part mystery, this riveting historical novel explores the truth behind a terrifying reality, as a young American woman, immersed in a strange foreign culture, encounters a world beyond her wildest imaginings. Buried secrets of a tragic past converge, threatening to destroy not just her hopes of redemption, but her very life.

Set in 1884, The Visitant paints an unforgettable portrait of a decaying city and the secrets that lurk in its dark, crumbling corners. Elena Spira has arrived there to take up the duties of nurse to a young epileptic man who has descended to the depths both physically and psychologically. Samuel Farber wants none of Elena’s help as he wallows in a laudanum-triggered haze of hallucinations. Samuel speaks of visits from a spirit, seemingly wild claims that Elena first rejects as drug-fueled. But, the truth is far more sinister. When Samuel’s best friend and host, Nero Basilio, arrives, Elena finds herself drawn to this charming man as he shows her the hidden delights of Venice. But there are dark forces at play—forces that Elena cannot begin to comprehend. Casa Basilio possesses a tragic history, and a ghost whose presence may be driving Samuel to madness. 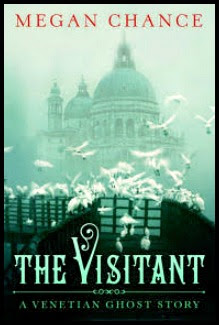 The Visitant is the first book by Megan Chance that I have read and it likely won't be my last. I like the way she crafted the story and how clearly she brought 1884 Venice to life. From her words you can see the crumbling splendor of Ca' Basilio, feel the cold that permeates the rooms, and smell the damp mold on the walls and fetid canal water, mixed with with the faint scent of cedar, iris and vanilla that clings to Laura's room. Elena is appealing and likable--it is easy to feel sympathy for her and the grave mistake she made that led her to her role as Samuel's nurse, as well as her need to be successful in returning him to health and his family in order to save her own. I did find that I preferred the ghost story to the romance. Both Nero and Samuel seemed weak and not worth 'redeeming' to be a long-term match for Elena, and I felt Elena fell a bit too fast for Nero. I enjoyed the slow build up of the story and the way the secrets of Ca' Basilo and its occupants were revealed--parts were predictable but there were some twists and turns that had me second-guessing what I thought was going to happen. There is a pleasantly creepy vibe to the story that makes it a good choice for a cool October night.

Author Notes: Megan Chance is a critically acclaimed, award-winning author of historical fiction, including Inamorata, Bone River, and City of Ash. Her novels have been chosen for the Borders Original Voices and Book Sense programs. A former television news photographer and graduate of Western Washington University, Chance lives in the Pacific Northwest with her husband and two daughters.

Food Inspiration: It's Italy so there is food in this ghost story. The larder of Ca' Basilio is well-stocked with cornmeal, beans, vinegar, flour, barrels of fermenting anchovy, kegs of wine, and ropes of garlic and drying herbs. In the kitchen, there is bread and fruit, roasted pumpkin, pork, fish, and bowls of sguassetto--a rich and spicy stew. There is wine of course, and tea with nougat and a plate of sugar-dusted fritters. The market stands in The Rialto have the crab soup man, fruit and vegetable sellers with stalls piled high with produce, baskets of wriggling fish, and the aroma of sausage, garlic and onions mingling in the air. There was a café meal of fried minnows and sardines in a "shiny sauce that smelled of vinegar, studded with raisins" along with a jug of wine.

I chose a breakfast of polenta as the inspiration for my dish representing this book--made even better by its topping of roasted chestnuts.

"Nero cut the chestnut into pieces, dropping them into my bowl."Try it with this." ...

Tentatively, I took a bite. The polenta was warm and delicious, salty with cheese, and the chestnuts were sweet and nutty, a rich, deep flavor. It was one of the best things I'd ever tasted, and I told him so." 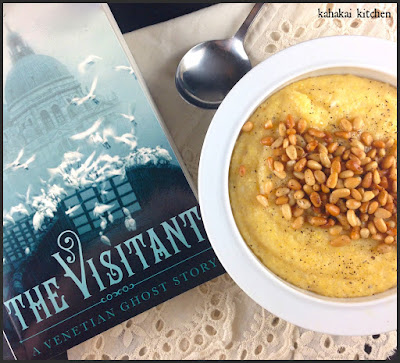 I see chestnuts occasionally in the stores here, but usually only at Christmas time so I decided to replace them with a topping of buttery pine nuts. A rich and decadent topping for the creamy and cheesy polenta. 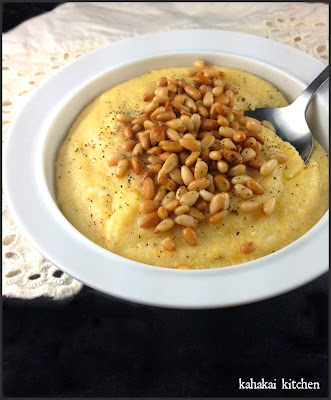 In a large, heavy saucepan, bring the water and salt to a boil. While briskly whisking, gradually add in the polenta. Once polenta is added, reduce the heat to low and cook, stirring often, until the mixture thickens and cornmeal is creamy and tender--about 10 to 15 minutes.

Add the milk, butter, and cheese and stir until the mixture is smooth and the butter and cheese have melted. Add a squeeze or two of lemon to brighten and alt and black pepper to taste. Place polenta in a serving bowl and top with the buttery pine nuts.

Buttery Pine Nuts
Inspired by Yotam Ottolenghi
1 Tbsp butter
1 Tbsp olive oil
1/3 cup raw pine nuts
Place the butter and olive oil in a small frying pan over medium heat. Once mixture is hot, add the pine nuts and toss them in the pan until golden--about 2 minutes. Watch them closely--they will begin to brown quickly and can easily burn. Set aside. 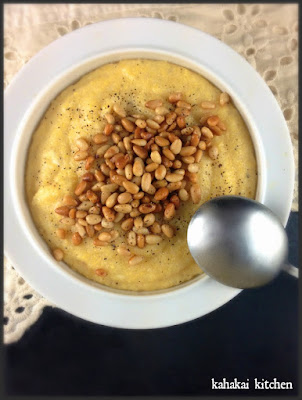 Notes/Results: I sometimes have texture issues with foods like polenta or grits, cream of wheat and even oatmeal--but when you have butter, cheese and a decadent nutty topping, I can't help but like it. This polenta had great flavor with the two cheeses, the thyme, black pepper, and a couple of squeezes of lemon I added to brighten things up. Thick and creamy, I ate it for lunch but I think it would be an excellent warming breakfast dish as well. The pine nuts added great texture and a brown butter flavor that was perfect. I would happily make it again. 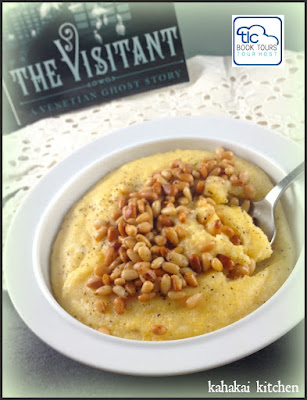 Note: A review copy of "The Visitant" was provided to me by the publisher and TLC Book Tours in return for a fair and honest review. I was not compensated for this review and as always my thoughts and opinions are my own.