Secrets and lies, people. It's always the secrets and lies that will get you in the end. Add those secrets and lies to some majorly bad decisions, toss in a murder and the search for a killer, and you have the dark and tense thriller Second Life by S.J. Watson. On today's TLC Book Tour stop, I am reviewing the book and also whipping up some luscious Limoncello Syllabub to go with it, because what's better to eat while you are reading an angsty thriller in the summertime than a cool and creamy (and alcohol-spiked) dessert?! 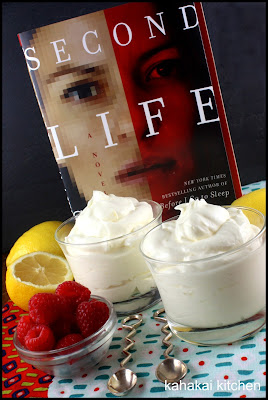 From the New York Times bestselling author of Before I Go to Sleep, a sensational new psychological thriller about a woman with a secret identity that threatens to destroy her.
How well can you really know another person?

How far would you go to find the truth about someone you love?

When Julia learns that her sister has been violently murdered, she must uncover why. But Julia’s quest quickly evolves into an alluring exploration of own darkest sensual desires. Becoming involved with a dangerous stranger online, she’s losing herself . . . losing control . . . perhaps losing everything. Her search for answers will jeopardize her marriage, her family, and her life.

A tense and unrelenting novel that explores the secret lives people lead; and the dark places in which they can find themselves Second Life is a masterwork of suspense from the acclaimed S. J. Watson. 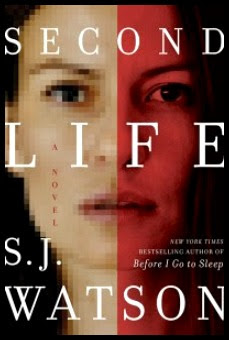 Having read and enjoyed Watson's first hit novel Before I Go To Sleep, I was anxious to read Second Life. Overall, I really enjoyed it for its intensity and its dark premise, set along the theme of the potentially dangerous world you can find online--where you don't always know who you might be dealing with. I did not love Julia, the main character in this book, but I found her story compelling--an addict, apparently not very happily settled into her life with a surgeon husband and a teenage son, adopted when her younger sister could not properly care for him. Julia starts her online interactions when her sister is murdered, ostensibly to find out more about her sister's hidden life and discover her killer, but her reasons for exploring quickly turn to her own desires to escape her current reality and create a second life for herself. Her addictive personality plays a big role as her compulsions and actions put at risk her own safety and security, as well as that of her family. It is this selfishness and lack of judgement that put me off from her--I understand the grieving for her sister and the desire to escape, but especially as a mother, for her to risk so much for self-gratification was disappointing. Julia certainly wasn't the only one holding secrets in this book and those secrets and the lies or omissions to cover them up were very damaging.

In Before I Fell Asleep, I loved the pacing and disliked the ending, feeling that it fell a bit flat after the climax of the story. Second Life had a slower build up and some uneven pacing throughout--but the final third was an intense roller coaster ride with plenty of twists and turns. I liked that while I guessed part of the puzzle and who was involved, I didn't have all of the pieces together in the right order as being surprised at the end is my preference in a psychological drama or mystery, and there were definite surprises here. I have mixed feelings about the ending. I can't go into any detail for risk of spoiling the story--you'll want to let it unfold yourself--but instead of the slow burn out in Second Life, it was extremely abrupt. It felt a bit like like running, pulse pounding, trying to catch your breath--then suddenly, a wall smacks down right in front of you and that's it. While I get the reason and see the beauty in an ending that leaves the reader wondering somewhat, my angsty self tends to need more closure than I got here. Still, Second Life has all the elements of a great summer thriller--a clever plot that pulls you in, plenty of action and drama, a few chills and a (much safer than creating a second life online) way to escape on a sultry day.

Author Notes: S. J. Watson was born in the Midlands and lives in London. His first novel was the award-winning Before I Go to Sleep, which has sold over four million copies in more than forty languages around the world. It was recently adapted into a major motion picture starring Nicole Kidman, Colin Firth, and Mark Strong.

There is not much food presence in Second Life so I grew a bit worried about what dish I would end up making inspired by the book. At a family dinner that Julia cooks to host her sister's friend Anna, right as the drama and tension really ratchet up, I found it--Lemon Syllabub. I am a fan of syllabubs--or really any billowy, cloud-like dessert, as well as citrusy desserts, so I knew it was the dish I wanted to make. 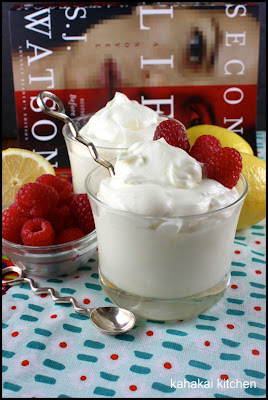 I went to Nigella Lawson first for inspiration since I have made both her Turkish Delight Syllabub and her Calvados Syllabub (please excuse the ugly photos if you look at them). I didn't find a lemon syllabub recipe from Nigella, so I checked with my other go-to-for British-classics-chef, Nigel Slater, and while he didn't have an expressly lemon one, his basic syllabub recipe had some interesting variations to try and build from. I used it as my starting point and decided to use limoncello as my alcohol. I also used Greek yogurt with the cream to lighten it up a bit and add some tang. I've put both Nigel's classic recipe below, as well as my Limoncello Syllabub adaptation below. 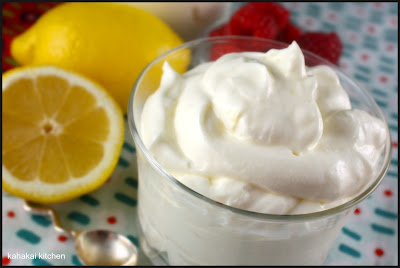 Nigel says, "Syllabub is one of those ancient desserts that seems to be showing its face again. I am never sure whether to believe the story that this dessert was originally made by milking a cow directly into a bowl of wine, verjuice or cider, as some early recipes suggest (you can trace the recipe back to the Tudors), but I like the tale enough to at least give it house room. Early efforts involved the thickened cream being served floating on sweet wine."

THE RECIPE: At its purest, the recipe involves dissolving sugar in lemon juice and sweet wine or brandy, adding a long curl of orange peel then leaving it to infuse overnight. The following day, double cream is introduced and beaten until thick. I use the grated zest and juice of one lemon, 2 heaped tbsp of caster sugar, 60ml sweet wine and a dash of brandy, leave the mixture overnight, then beat in 300ml cream.

THE TRICK: The whole business of infusing the sugar and alcohol with the orange and lemon probably seems a bit hocus-pocus, but the process shouldn't be skipped: the flavour is more mellow if you let it sleep overnight. The crucial part, and where this dessert stands or falls, is in the whipping of the mixture. Use a large balloon whisk or electric mixer and beat slowly, getting right to the bottom of the mixture. Watch the texture like a hawk. Stop as soon as the mixture starts to feel heavy on the whisk, when it will sit in soft folds, like a duvet. If you take it too far it will curdle quicker than you can curse.

THE TWIST: Good as it is, the odd embellishment is no bad thing with this recipe. A drop of Eau de vie, perhaps Framboise or Kirsch adds a welcome kick, as does some crushed ginger in syrup, or even a spoon of ginger marmalade. I have had it with a hint of nutmeg, a little rhubarb and flavoured with lime juice and zest. Nigella offers us a particularly fragrant twist by using Cointreau, orange flower water and rose water, to give it a Turkish feel. 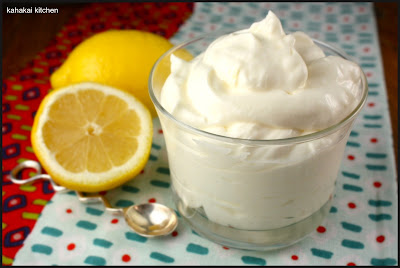 Mix the lemon juice, zest, sugar, vanilla and limoncello into a bowl, cover, and let sit overnight in the fridge.

The following day--or before serving, Add the heavy cream and yogurt to the limoncello mixture in a large mixing bowl and slowly beat until soft folds (Nigel says "like a duvet") form. Go slow and be careful not to beat too much--folds, not peaks or curdled.

Scoop into wine glasses or dessert bowls and serve garnished with fresh berries if desired. Enjoy! 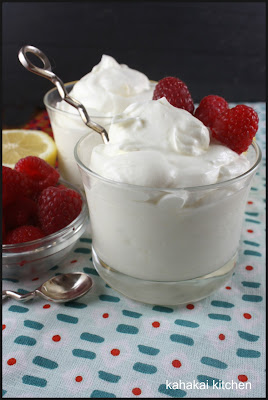 Notes/Results: Just the kind of soft, cold, fluffy cloud of lemony goodness that I love. I did follow Nigel Slater's advice and let my lemon-sugar-limoncello mixture sit overnight, though I did no comparison to see if it changed or mellowed the flavor. I could taste the lemon and the limoncello and I was happy--very happy. This is a pretty effortless dessert. You just need to take the whipping of the mixture to that sweet spot of soft folds--it should not be stiff and if you don't take it there, or beyond that point, it shouldn't curdle. I used larger glasses for serving (8 oz), as those were the ones I wanted for the photographs but you can easily get 4 smaller servings out of the mixture. It is delicious on its own, but I like the contrast of color and texture when it is served with the fresh red raspberries.  I will definitely make it again. 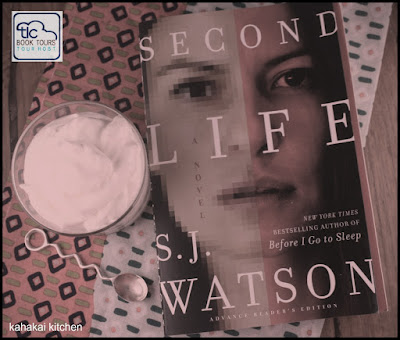 It's been a while since I have spent time with my friends at I Heart Cooking Clubs since I've been taking a blogging 'semi-break'--only posting the book reviews I had previously scheduled--but since it's Potluck week, I am sharing this Nigel Slater-based recipe there. You can see what recipes and which IHCC chefs everyone cooked from by following the picture links on the post. 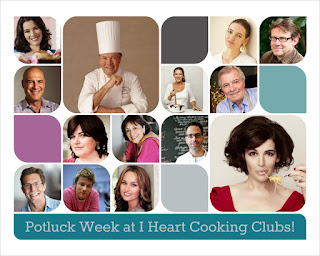 Note: A review copy of "Second Life" was provided to me by the publisher and TLC Book Tours in return for a fair and honest review. I was not compensated for this review and as always my thoughts and opinions are my own.