The Book Tour Stops Here: A Review of "Mireille"--A Novel by Molly Cochran

If you came of age anytime from the late 70s to the mid 90s, you are likely familiar with the plethora of giant and best-selling "trashy" novels of those decades. There was Deceptions by Judith Michael, Hollywood Wives by Jackie Collins, Lace by Shirley Conran, A Woman of Substance by Barbra Taylor Bradford, and--from the grande dame of the trashy novel--Judith Krantz; Scruples, I'll Take Manhatten, Princess Daisy, and Mistral's Daughter to name just a few. These guilty pleasure tomes (500 to 600 pages or more) spawned soapy and sexy mini-series, were usually set in the glittering worlds of fashion or Hollywood, and always had money, drugs, power, revenge, and (the real reason most of us snuck them from our mother's nightstand) plenty of smut. They typically featured a rags-to-riches rise of a poor girl--who despite all the woes and abuse thrown at her over her life (from at least one relationship with a misogynist), rises to the top and then finds she isn't any better off being rich and famous. I am not going to lie, I read most of them--passing them back and forth with my friends, fascinated with both the glamour and the scandal of it all. So, I have to say that when I received my Advance Reader's Copy of Mireille: A Novel by Molly Cochran, and hefted the 600+ pages, I took a little trip back into time and started casting the mini-series in my head. 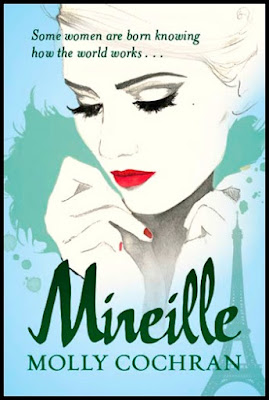 Near the end of World War II, seventeen-year-old Mireille de Jouarre flees the home of her stepfather, a Nazi collaborator and abusive drunk. She finds shelter with her childhood friend Stefan, and the two fall deeply in love. But as the fighting escalates, Mireille must escape alone to Paris, where she discovers she’s pregnant and lacking a way to provide for her child.

So begins her new life as l’Ange—the Angel. After an unlikely meeting with a wealthy aristocrat in a Parisian hotel—and her acceptance of his solicitation—Mireille becomes the most celebrated poule in all of France, eliciting huge fees and invitations to exclusive parties. At one of these events, Mireille meets Oliver Jordan, an American womanizer and film producer, and is soon launching a promising film career. As her star rises, Mireille is determined to bury her past. But her success isn’t as carefree and glittery as it seems, and when her daughter’s future is threatened, Mireille must make a deadly decision in a desperate attempt to finally choose her own path.

My Review:
I would classify Mireille as a summer poolside read, all the better if you have a cocktail in hand and you are staying at a fancy resort with cabana boys coming by to spritz you with Evian water. (Note: hold the book away from the mist during spritzing.) Taking place primarily from 1945 through 1963, it is tagged under historical fiction, but has many of the hallmarks of those popular novels of yesteryear--an exploited and abused heroine who is struggling to succeed, hide her sordid past, and protect her daughter from that past. It has an (evil) obsessed Svengali-esque lover, drugs, sex, and lots of Hollywood glitz and glamour. I am not sure that it needed so many pages to tell the story, but I was surprised at how quickly those pages went by. As much as I felt I knew the story and outcome, I wanted to find out how Mireille and her daughter Stephanie ended up and didn't mind taking the journey.

There is a lot of sex in the book--most of it is not pretty and some of the rougher, abusive scenes had me cringing. If you like/need a clean book, look elsewhere. Mireille is an interesting character--hard to get to know and to warm up to, and quite naive in her decisions and reactions which was frustrating. I found myself wanting to shake her several times, but then I wanted to hug her a few times too. I imagine that Mireille's distance is part of the character Molly Cochran created, that epic and unobtainable "star" who didn't allow others to get close, but I was investing the time to read 600+ pages and I wanted to spend some of those pages going deeper and connecting with her and the supporting characters more. Overall, Mireille is more froth than substance, but its sweeping story makes for an entertaining escape and for me, it was a nostalgic journey back to a time when these novels ruled the best sellers lists.

Author Notes: Molly Cochran is the author of more than twenty novels and nonfiction books, including the New York Times bestseller Grandmaster, The Forever King, The Broken Sword, and The Temple Dogs, all cowritten with Warren Murphy. She is also the author of The Third Magic, and she cowrote the nonfiction bestseller Dressing Thin with Dale Goday. Cochran has received numerous awards, including the Mystery Writers of America’s Edgar Award, the Romance Writers of America’s “Best Thriller” award, and an “Outstanding” classification by the New York Public Library. Recently she published a series of young adult novels, Legacy, Poison, and Seduction, and two novellas, Wishes and Revels. Legacy won a 2013 Westchester Fiction Award.

Note: A review copy of "Mireille" was provided to me by the publisher and TLC Book Tours in return for a fair and honest review. I was not compensated for this review and as always my thoughts and opinions are my own.