Packing up her unsatisfying life in New York City, Cassie moves to Sweetwater, Tennessee after she is left a house and land from her grandfather. Cassie doesn't know this part of her family, having been taken away by her father after her mother's death when she was a small child. Looking for both a chance to start over, and to learn more about her mother, the circumstances of her death, and her grandfather's role in it, Cassie is soon embroiled in family drama and dark secrets in today's TLC Book Tour stop, Sweet Water, a novel by Christina Baker Kline. 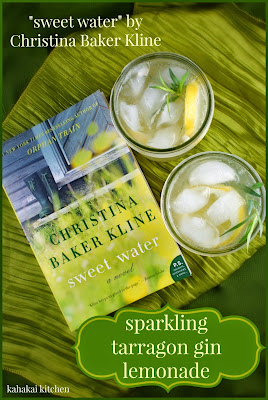 Cassie Simon is a struggling artist living in New York City. When she receives a call from a magistrate telling her she has inherited sixty acres of land in Sweetwater, Tennessee, from her grandfather, whom she never knew, she takes it as a sign: it’s time for a change. She moves to the small Southern town where her mother, Ellen, grew up—and where she died tragically when Cassie was three.

From the moment she arrives in Sweetwater, Cassie is overwhelmed by the indelible mark her mother’s memory left behind. As she delves into the thicket of mystery that surrounds her mother’s death, Cassie begins to discover the desperate measures of which the human heart is capable." 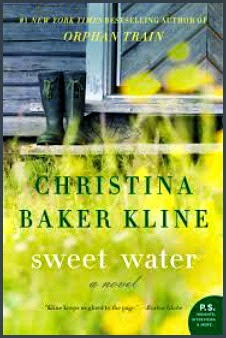 I was not very familiar with Christina Baker Kline although I had heard good things about her novel Orphan Train. I signed up to be on the TLC Blog Tours for her first four books (being reissued after the success of Orphan Train), based on the descriptions alone--a bit of a risk if I ended up not liking her writing style I suppose. Sweet Water is her first novel, originally published 1993. The story alternates between Cassie and her grandmother Clyde with Clyde's sections going between present day and glimpses from the past. I found Clyde difficult to like--she definitely isn't what comes to mind when you think of a grandmother. As her story unfolds you begin to understand the reasons behind her brittleness and feel some sympathy for her, but her actions make it difficult. I did find that her parts of the storytelling were the most absorbing however, as it is where the secrets are unraveled bit by bit. Cassie is likeable, although at times lacking in maturity and making some questionable decisions--particularly when it comes to her romantic life. I don't want to go into the details of the romance too much--for me it felt out of place, and the family dynamics and drama were interesting enough without the added complication. There is plenty of family drama to be found--with Cassie, Clyde, and the rest of the family--her aunt, uncle, their spouses and children. There is suspicion and some resentment of Cassie for being favored by the inheritance, and past resentments of her mother's favored place in the family.

Baker Kline writes beautifully, painting pictures with her words. "Later what I remembered most was the sky, the way yellow and violet overlapped like layers of frosting on a slice of birthday cake, the way the sun slipped behind and in front of clouds, gold-tipping them like illuminated manuscripts as the violet turned to purple and the yellow deepened. By the time I went inside, the sky resembled a ripe bruise, the blood beneath it drawn up close to the surface." I could picture the details in my mind--the house, Cassie's sculptures, the town and countryside, and that is what I liked best about this novel. Least liked--I found the ending somewhat abrupt and unsatisfying. Although the major secrets come out and things seem on track to being resolved, it felt like it was missing something. Still, overall, Sweet Water kept me interested and would be a good read for fans of women's fiction, family dramas and secrets, and self-discovery.

Author Notes: Christina Baker Kline was born in England and raised in Maine. The author of five novels, including the runaway bestseller Orphan Train, Kline has taught literature and creative writing at Yale, New York University, and Fordham. She lives outside of New York City. Find out more about Kline at her website, connect with her on Facebook, and follow her on Twitter. 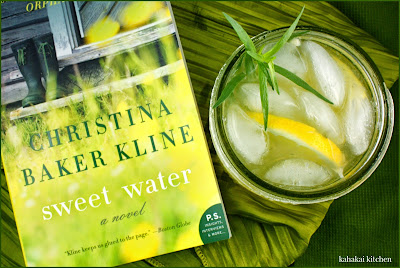 Being a family drama set in the south, there is food in the novel--casseroles, turkey, coleslaw, creamed corn, cornbread, green beans, home-canned veggies, pound cake, and plenty of iced tea and lemonade to wash it all down. I love homemade lemonade, particularly lemonades infused with herbs. I am particularly attached to tarragon lately so I was set on making a tarragon-infused lemonade. Then I came across a recipe for Sparkling Tarragon Gin Lemonade from Bon Appetit. Cassie mentions drinking gin and tonics--made up mostly of gin, in college, saying that "The gin helped me see everything with incredible clarity..." Having all of the ingredients needed to make the cocktail and loving any excuse to "muddle"--I knew this drink was what I wanted to make to represent the book. (Plus it goes so beautifully with the cover!) ;-) 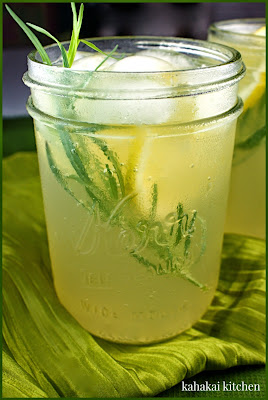 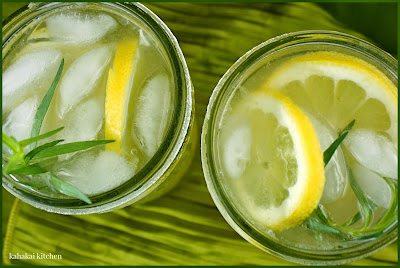 Notes/Results: A delightful summertime sipper--crisp, slightly sweet, refreshing with the tangy lemon, the anise notes of the tarragon. A little sophisticated with the slightly floral elderflower liqueur and the piney notes of the gin. Definitely easy to drink and perfect for a humid afternoon or evening outside. I will make this again. 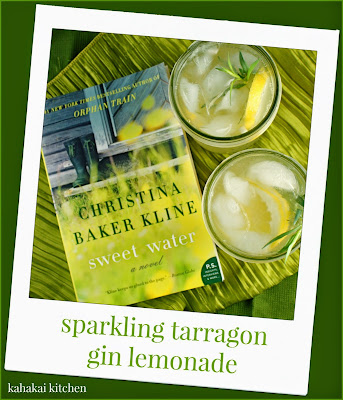 Note: A review copy of "Sweet Water" was provided by the publisher and TLC Book Tours in return for a fair and honest review. I was not compensated for this review and as always my thoughts and opinions are my own.

Happy Aloha Friday! Keep your fingers crossed for the State of Hawaii as we are facing 2 hurricanes/tropical storms in the next few days. This post is scheduled to go just in case I end up without power this weekend. Here's hoping everyone gets through it intact. I'll keep you posted as I am able. ;-)