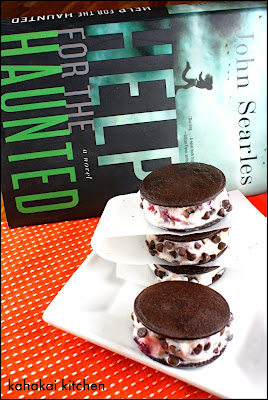 A late night call is usually not a good thing. For Sylvie Mason, it is a somewhat common occurrence-- usually a potential client calling for the "help for the haunted" her parents provide out of their basement. This night is different as the call is from her sister, gone from home for 3-days and telling Sylvie's parents that if they want to talk, they need to meet her at a church. Sylvie's parents don't come out of that church alive and this particular late night call becomes a terrible, life changing event for Sylvie. Today's TLC Book Tour review and recipe stop is Help for the Haunted, a creepy and compelling novel by John Searles.

"Sylvie Mason’s parents have an unusual occupation: helping “haunted souls” find peace. After receiving a phone call late one snowy night, they are lured to an old church on the outskirts of town, where Sylvie falls asleep in the car and is awoken by the sound of gunshots.

Orphaned on that night, Sylvie comes under the care of her reckless, distant older sister, still living in the rambling Tudor house that guards the relics of her parents’ past. As she pursues the mystery of their deaths, Sylvie’s story weaves back and forth between the time leading up to the murders and the months following, uncovering the truth of what happened that night—and the secrets that have haunted her family for years." 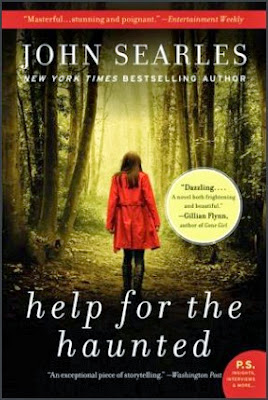 
"If there is good, there is bad. If you believe in one, you must accept the existence of the other.”

While not completely scary--this book has a definite creepy vibe. (If there happens to be an old Raggedy Ann doll sitting in your house, I recommend locking it up somewhere--especially while reading this book.) I watched the paranormal movie The Conjuring a few months ago, about a real-life couple who were paranormal investigators--Ed and Lorraine Warren (best know for their involvement in the Amityville Horror case). Searles grew up in the same town as the Warren's and they were an inspiration for Sylvie's parents. Searles doesn't ask the reader to believe in the supernatural but he certainly makes you wonder like Sylvie does about what is real and what is not. Sylvie isn't sure what to believe about her parents, their abilities and the paranormal world and Searles brings us along on that journey with her. She is a great character who feels very real, loyal, loving and I wanted her to have a better lot in life than what she had been given. From her parents, to her sister, her uncle, and the various adults involved in her life, most everyone is selfish and not looking out for her welfare above their own interests and that is sad. It makes the connection to Sylvie's character strong but it's hard to connect to anyone else, especially her older sister, Rose. Overall, Searles crafts a well-written story with plenty of twists, turns and misdirections in the plot. A little frustrating at times but the guessing and trying to put it all together made this book an absorbing read for me and made the 400 pages pass quickly. Help for the Haunted is a bit of a mix--mystery, family drama with a bit of paranormal thriller thrown in. If you like your fiction entertaining, with an overlying feeling of dread and anticipation, you'll like this book.

Author Notes: John Searles is the author of the national bestsellers Boy Still Missing and Strange but True. He frequently appears as a book critic on NBC’s Today show and CBS’s The Early Show. He is the Editor-at-Large of Cosmopolitan. His essays have been published in the New York Times, the Washington Post, and other national newspapers and magazines. He lives in New York City and can be found on Facebook and also on Twitter: @searlesbooks. 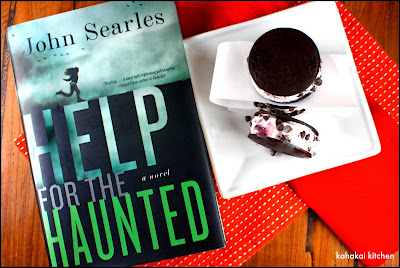 Food is not in the forefront of this book, Sylvie isn't exactly being nourished in the care of her sister saying, "Rose refuses to bother with grocery shopping except when Cora is scheduled to come by with her clipboard. Most nights, we eat Popsicles for dinner. Potato chips for breakfast. Mayonnaise smeared on bread in the middle of the night." Sylvie's counselor Arnold Boshoff likes to read cookbooks at night when he has trouble sleeping and flashbacks of Sylvie's mother have her cooking meals for the family like pot roast, vegetable lasagna and Lady Baltimore cake. With Rose away, Sylvie, her parents and Abigail, the girl they are trying to help spend the summer evenings getting ice cream and swimming at a local pond. I took my inspiration from the Popsicles-- Sylvie finds the cherry ones to be "the best kind" and the chocolate ice cream, making a vanilla ice cream studded with fresh cherries and mini-chocolate chips. Sandwiched between small, thin wafer cookies they are as portable as a Popsicle but a bit more fun. 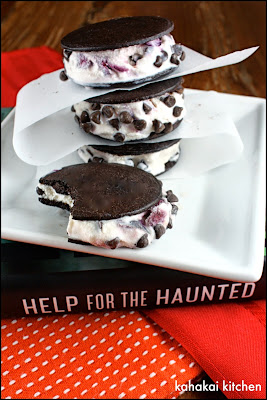 In an ice cream machine combine yogurt, maple syrup, vanilla, and salt. Churn according to ice cream maker instructions.  Once it is mostly frozen, add the cherries and chocolate and combine for another minute or two until ingredients are well-mixed. Transfer to an airtight container and freeze about 30-45 minutes until firm but scoopable/pressable.

Place six wafer cookies (upside down) on a plate covered with wax paper. Place a small scoop of frozen yogurt on top of cookie and sandwich with second cookie, pressing gently together. Role the edges in mini chocolate chips to garnish and freeze about 30 minutes to set up. (Note: If the fro-yo becomes too soft, refreeze until firmer and not mush.) Enjoy! 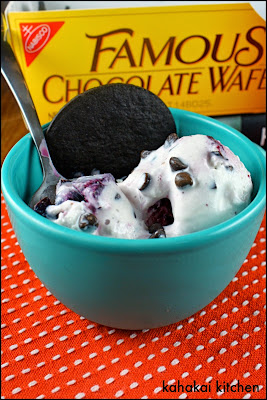 Notes/Results: Just a simple but tasty little ice cream/fro-yo sandwich. I like that these little wafer cookies (the kind you use to make icebox cake), are small--good portion control unless you eat a bunch. ;-) The yogurt adds a nice tangy element to the sweet bing cherries and the tiny chocolate chips. It's plenty good on its own if you don't want to bother with the sandwiching. A fun summer treat for a suspenseful and enjoyable book. I would make them again. 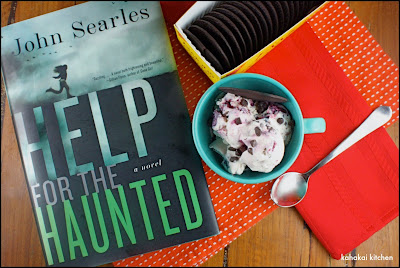 Note: A review copy of "Help for the Haunted" was provided by the publisher and TLC Book Tours in return for a fair and honest review. I was not compensated for this review and as always my thoughts and opinions are my own.