The Book Tour Stops Here: 'The Sea Garden' by Deborah Lawrenson with Provencal White Bean and Artichoke Spread with Lavender and Herbs

From an island off the French Riviera, to lavender fields in Provence, to the cities of London and Paris, 'The Sea Garden'--A Novel by Deborah Lawrenson is a journey through both time and place as three novellas converge into one alluring story, spanning decades and shrouded in mystery. 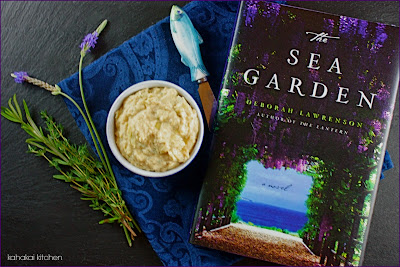 Three stories rich in drama and steeped in atmosphere are linked by a single mystery in this spellbinding novel of love and loss in the fog of war. 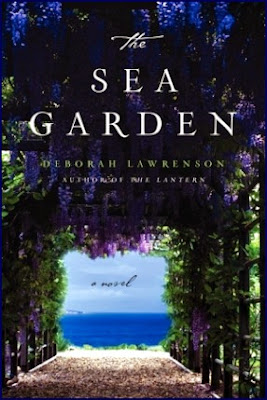 It seems a bit silly to start my book review with the fact that I could just be happy sitting and staring at the cover of The Sea Garden. The artwork is gorgeous--as it should be to capture the mood and beauty of Deborah Lawrenson's words. I had the pleasure of reviewing Lawrenson's novel The Lantern a couple of years ago and described it as "lush" and "a book for the senses." The Sea Garden is no different. The author's words paint pictures in the mind--you see the characters and places, feel the warm breezes, smell the flora and fauna and generally get just as caught up soaking in the settings as you do in the stories themselves. Of the three stories, I probably connected most with the second and third which are both primarily set in the later part of WWII. I have an interest in the history of that time. I found the characters of Marthe and Iris to be brave and compelling and the roles they played in the war were fascinating. The book's 300+ pages move quickly, as much as I wanted to linger and soak in the beauty of the prose, I found myself hurrying to turn pages to find out what would happen next and see how everything would connect. The way it all comes together at the end was a good balance of things I had figured out as well as some startling things I did not see coming. This is a wonderful book for a warm summer morning in the garden or on the lanai. If you love descriptive writing, mysteries, historical fiction, women's fiction, or you just want to escape--grab a copy of the The Sea Garden and let it take you away. 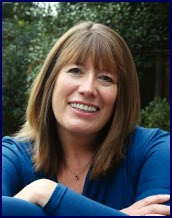 Author Notes: Deborah Lawrenson studied English at Cambridge University and worked as a journalist in London. She is married with a daughter and lives in Kent, England. She and her family spend as much time as possible at a crumbling hamlet in Provence, France, the setting for her novel The Lantern and inspiration for The Sea Garden.  Find out more about Deborah at her website, read more at her blog, and connect with her on Facebook 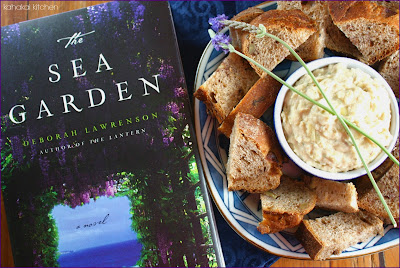 Although not a foodie novel, there was plenty of food to be inspired by in the book. Lawrenson's descriptive writing translates well to food and there were lush fruit trees and gardens on the island, warm croissants and coffee, a tomato and onion tart, salad with a light tangy dressing and grilled crayfish, tea and toast, orchards of fruits, nuts and olives, even courgettes and a nice fat aubergine...-- so many ideas to choose from. On the island, Ellie eats from a platter of Provencal hors d'oeuvres and that got me thinking of some sort of savory spread with the flavors of Provence. I wanted to work lavender into the mix for perfumer Marthe (who also appeared in Lawrenson's The Lantern). I ended up putting together a pantry-friendly recipe of Provencal White Bean and Artichoke Spread with Lavender and Herbs that I think makes the most of the ingredients and would be a welcome part of any appetizer plate. 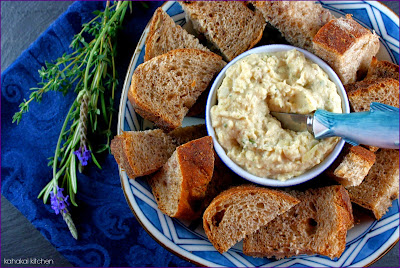 In a small  skillet, heat 2 Tbsp of the olive oil over medium-low heat. Add the garlic, culinary lavender, fresh rosemary and thyme, stirring until the herbs are fragrant and the garlic is just beginning to brown, about 2 minutes.

Place the beans in the bowl of a food processor. Pour the garlic-herb oil mixture over the beans. Add the lemon juice and the remaining 1/4 cup of olive oil and process to a fairly smooth puree--stopping the machine to scrape down the sides if needed. Add the artichoke hearts and pulse 4-5 times so they are chopped but still have some texture.

Taste and season as desired with sea salt and ground white pepper, pulsing another 3-4 times to mix. Place in covered container in the fridge for an hour or two so that flavors develop. Serve with raw vegetable sticks, bread chucks, crackers or flat bread.

Dip will keep covered and refrigerated for several days. 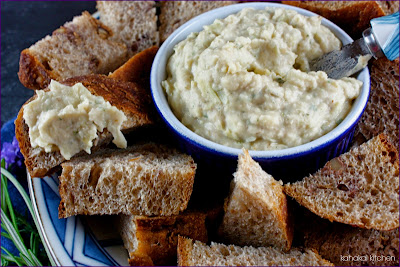 Notes/Results: This is just a wonderful little spread, the lemon, lavender, rosemary and thyme setting off the flavor of the beans and artichoke hearts rather than overpowering them. There is always a fine line between getting enough lavender flavor to have it be a happy surprise and not like being bashed with a bottle of flowery perfume and this one doesn't cross to the dark side. Since I had a tin of Maui-grown culinary lavender, I used it along with fresh rosemary and thyme from my herb pots but you could also use an Herbes de Provence blend to get a similar effect. The fig and walnut wheat bread may seem like an odd choice with a white bean spread, but the little bursts of sweetness from the figs, the nutty walnuts and the yeasty flavor of the bread went surprisingly well with the dip. With a glass of crisp white wine, it was an easy dinner on a warm night. I will make it again. 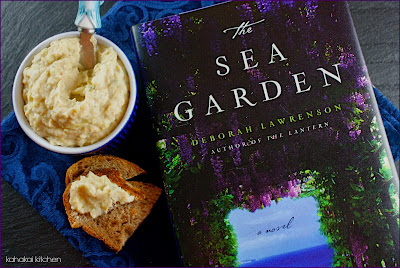 Note: A review copy of "The Sea Garden" was provided by the publisher and TLC Book Tours in return for a fair and honest review. I was not compensated for this review and as always my thoughts and opinions are my own.


You can see the stops for the rest of the TLC Book Tours and Reviews here.