Newly promoted Detective Chief Inspector Louisa Smith gets assigned her first murder investigation and it quickly turns into two cases when another body turns up. Two deaths on the same night--could it be a coincidence? One is the clear murder of a 29-year-old local woman, the other is reported as the suicide of another local woman but, it quickly becomes apparent that there is a connection between the two incidents and that the second death may not have been a suicide. In Under a Silent Moon, author Elizabeth Haynes weaves a complex and intriguing mystery that gives an inside look to British police procedures and introduces a smart new female lead. 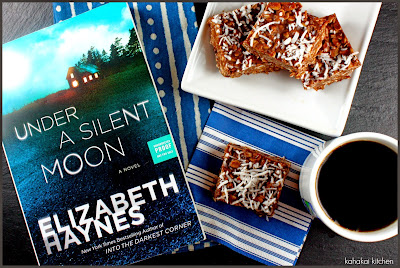 
Devour the Book
Connect the Clues
Discover a Killer


Two women share one fate.
A suspected murder at an English Farm.
A reported suicide at a local quarry.

Can DCI Louisa Smith and her team gather the evidence and discover a link between them, a link which sealed their fate one cold night, Under a Silent Moon?

A tense, compelling and unsettling novel brimming with source material and evidence set over just six days, Under a Silent Moon will keep you gripped until the very last page and asks:


Can you connect the clues to discover the Killer?
Solve the crime alongside DCI Louisa Smith and her team. 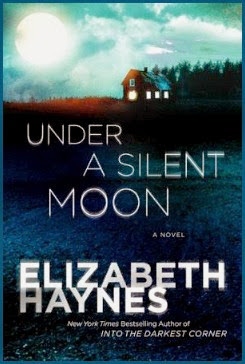 I have become a big fan of author Elizabeth Hayes, devouring her other three novels, two (Into the Darkest Corner and Human Remains) for TLC Book Tours. I love the realistic detail she puts into her novels--legal transcripts, police reports, witness statements--as it takes the reader deep inside the drama. In Under a Silent Moon, there are a lot of characters to keep track of and a lot of British police jargon thrown in but Haynes makes it work, keeping the pace going and not letting the story get bogged down. Even if the precise definitions of the acronyms used aren't familiar, it is easy enough to know what is going on. The story is told from the point of view of the different characters--Lou and her team as well as some the key suspects and persons of interest in the story, as well as through the police documents and evidence. There are not huge surprises because the clues are there--but there were enough twists and turns that kept me guessing. I thought I had it figured out a few times but changed my mind as more evidence came in. At the end, I had part of it solved but wasn't quite correct in all of the details or the motivations of the suspects involved. I liked these little plot twists--they kept me turning pages, waiting for more info to come in.

Although not as creepy-crawly as her Human Remains, Under a Silent Moon still builds the drama and suspense. As in her other books, Haynes' glimpses into the neighborhoods she writes about will make you take a second look at your own neighbors and wonder how well you really know them and what they do in private. ;-)  I liked Louisa--a strong lead, but not without doubts and faults, and I look forward to delving more into her character and getting to know her team in future books. Mystery/thriller lovers, fans of police procedurals, female sleuths, well-written detective series, and British-set suspense novels will gobble this one up.

Author Notes: Elizabeth Haynes is a police intelligence analyst, a civilian role that involves determining patterns in offending and criminal behavior. Dark Tide is her second novel; rights to her first, Into the Darkest Corner, have been sold in twenty-five territories. Haynes lives in England in a village near Maidstone, Kent, with her husband and son. 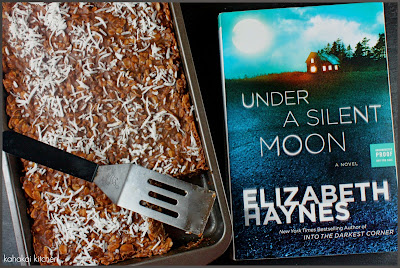 Following the intense investigation of two murders over six days, most of the food in the book is grabbed on the run. Sandwiches, English breakfast plates, curry takeout, kabobs... DCI Lou seems to mostly exist on double espressos, cups of coffee and Kit Kat bars (she says 'the orange ones' count as her "five a day"), which doesn't seem like good crime-solving brain food--although it did make me crave candy bars. Looking for something chocolaty, that would works as a grab-and-go, but with more nutrients than a candy bar, I decided to make no-bake cookie bars. I looked up healthier versions on line and used several recipes as a starting point--finding that most of the natural ingredient versions used a combination of oats, coconut, dark chocolate, peanut butter, honey or agave, and coconut oil as a base with different nut and fruit combinations added in. I chose almond butter--less overpowering than peanut butter in flavor, and added sliced almonds, dried cherries and chia and hemp seeds for extra texture and nutrients. Due to all the coffee consumed by Lou and her team, I decided to throw some of that life-blood caffeine into the mix and added coffee to make these mocha bars--perfect to partner with a cup of coffee for an extra energy boost. 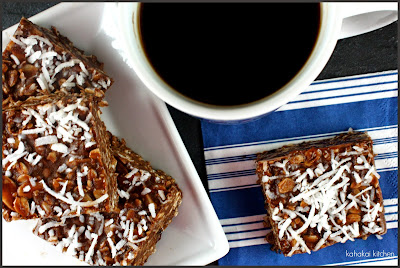 Prepare a 8 x 8" pan by spraying with no-stick cooking spray and lining with parchment.

In a medium-large sauce pan, add the coconut oil, honey and nut butter over medium-low heat, stirring until melted and blended together. Stir in coffee powder, vanilla extract and sea salt until blended.

Pour into prepared pan and sprinkle top with the extra shredded coconut (or nuts, or chocolate chips) if desired. Cool in the fridge until mixture is hardened (2-3 hours or overnight if you can wait.) Cut into small bars and enjoy. Store cut bars covered in the refrigerator or freezer so they remain firm. 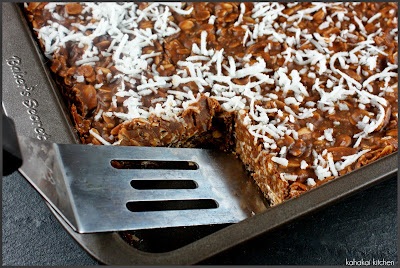 Notes/Results: Rich and decadent enough to soothe any chocolate craving. These bars are chewy and satisfying. Although not necessarily health food or low in calories, they are full of healthy fats and nutrients and certainly better for you than a candy bar or cookie from the vending machine. The coffee taste is subtle and hits at the end, it also adds a certain depth to the dark chocolate. There is a hint of coconut flavor, along with the fruity bites of tangy dried cherries and a little crunch from the sliced almonds and seeds. You could of course use whatever dried fruits, nut butter, nuts and seeds that you like. I like this combination--nothing overpowers anything else and it all works together well. They do get a little soft and melty if they sit out for too long in a warm environment, so they are best stored in the fridge or a cool place until you are ready to serve them. Quick and easy, made from natural ingredients and killer with a cup of dark roast coffee--I would happily make them again. 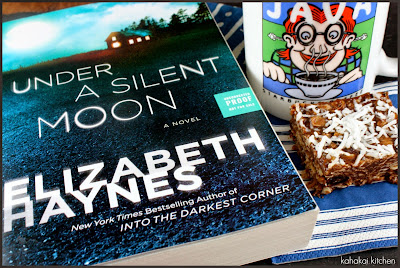 Note: A review copy of "Under a Silent Moon" was provided to me by the publisher and TLC Book Tours in return for a fair and honest review. I was not compensated for this review and as always my thoughts and opinions are my own.