The Book Tour Stops Here: "Two Sisters" by Mary Hogan with a Salad Plate of Asparagus Bruschetta with Spiced Almonds, Along With Mini Tomatoes & Pear

All families have at least a little dysfunction and drama. The Sullivant family has it in spades and youngest daughter Muriel bears the brunt of it in Two Sisters, a Novel by Mary Hogan. Muriel is the fifth wheel in her family. Perfect Pia, her older sister, is the apple of her mother's eye. Brother Logan, was born to give her distant father a son. Unfortunately Muriel, was an accident--unplanned, not wanted, and made aware of that fact her entire life. Now in her early 20's, Muriel does her best to stay away from her family and their many blows to her self esteem, until her sister shows up with a secret that forces Muriel to face her past and determine what her future will hold. 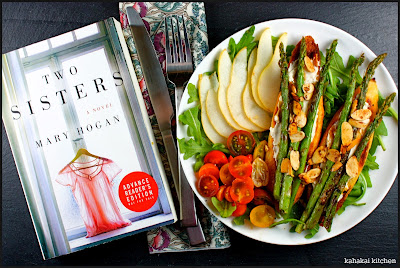 The third child in a family that wanted only two, Muriel Sullivant has always been an outsider. Short, dark-haired, and round, she worships her beautiful blond sister, Pia, and envies the close bond she shares with their mother, Lidia. Growing up in their shadow, Muriel believes that if she keeps all their secrets—and she knows plenty, outsiders always do—they will love her, too.

But that was a long time ago. Now an adult, Muriel has accepted the disappointments in her life. With her fourth-floor walk-up apartment and entry-level New York City job, she never will measure up to Pia and her wealthy husband, their daughter, and their suburban Connecticut dream home. Muriel would like nothing better than to avoid her judgmental family altogether. One thing she does quite well.

Until the day Pia shows up to visit and share devastating news that Muriel knows she cannot tell—a secret that will force her to come to terms with the past and help her see her life and her family in unexpected new ways.

Two Sisters is a powerful and poignant debut novel about two sisters—opposites in every way—as well as their mother and the secrets and lies that define them all." 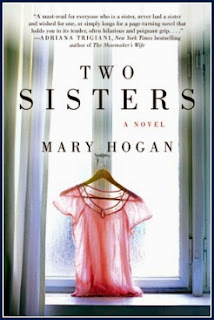 I found myself engrossed in the book rather quickly, wanting to learn the secrets of the family and anxiously turning the pages as they were revealed. The story moves along well, going back and forth between the current happenings, back to Muriel's childhood, and even farther back to the meeting and subsequent marriage of her parents. Two Sisters isn't always an easy read. With the exception of Muriel, the Sullivant family is hard to like and connect with. Lidia the mother is selfish and cruel. Owen, the father is emotionally absent from the entire family. Logan, distanced himself with his artistic pursuits and left home at an early age--avoiding his family even more than Muriel, and Pia mistreated her younger sister growing up and when they 'talk' as adults, it's mostly Pia talking disparagingly to Muriel about her life choices. Muriel is likeable and sympathetic in a kicked-puppy kind of way. She (understandably) lacks any sort of confidence and is emotionally needy--wanting love and acceptance, but still manages to have a sense of humor. Some of the self-talk in her head had me chuckling--a nice relief from the more tragic, poignant moments in the story and the angst they caused me. I rooted for Muriel and was pleased to see her emotional growth--most of which comes in the last third of the book. In that vein, I did feel that the ending came too quickly--with all of the emotions this book raises, I would have liked a longer, more drawn out and detailed resolution. In the end, Two Sisters is an absorbing, well-written story about family and its dynamics. It will make you think, probably shed tears--and, if you happen to have wonderful, loving and supportive older sisters like mine, you'll want to hug them and thank your lucky stars. ;-)

Author Notes: Mary Hogan is the NAPPA Award-winning author of seven young-adult books. Two Sisters is her first novel for adults. She lives in New York City with her husband, Bob, and their dog, Lucy. Find out more about Mary at her website, follow her on Twitter, and connect with her on Facebook. 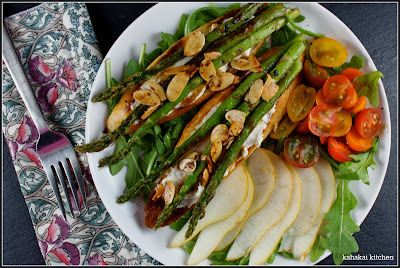 Where there is family (dysfunctional or not), there is usually food and there are many food mentions throughout Two Sisters--starting with the huge tin of Garrett's Popcorn--half CheeseCorn, half CaramelCrisp--that Muriel is noshing on at the start of the book while watching a Diners, Drive-ins, and Dives Marathon. I had the chance to try Garrett's Chicago mix a couple of years ago when traveling and the combination of the caramel and cheese corn is pretty amazing--and messy. There are mentions of various lunches, dinners and snacks--including some pretty unhealthy road food, that the various characters consume. For my usual dish inspired by the book, I decided on a salad plate made up of ingredients that Muriel runs out and buys when her sister calls her to tell her she is dropping by.

"Dressed in dark-wash Levi's and a black tee, Muriel pulled open the glass door to the corner market at the Broadway end of her block. She lifted a green shopping basket out of the stack and hung it on her arm, maneuvering in a zigzag fashion through the narrow aisles of the small gourmet store. To be on the safe side, she chose a liter of club soda and enough limes to flavor a pitcher of margaritas. Pears too, though they were ridiculously expensive, plus heirloom cherry tomatoes, asparagus spears, a baguette, and spiced almonds. All items she'd once read about in a magazine article on effortless, yet elegant, entertaining. "Crud," she muttered to herself. Why hadn't she ripped out that page so she'd know what to do with the classy ingredients once she got them home? Does one serve mini tomatoes raw on a plate next to uncooked asparagus? Wouldn't that look too much like an exclamation point to be considered "elegant" in any way? And surely there must be some sort of dip involved? In the checkout line, she considered asking the girl at the register, but the unruly state of her ponytail dissuaded her."

I was amused by Muriel's list and her attempts to get her sister to eat what she bought by randomly offering her the items, "Club Soda?" Muriel asked her sister. "With lime?" ..."Spiced almonds? A pear?" ..."Baguette? Asparagus spear?"... I thought it would be fun to take her list of 'classy ingredients' (sans the soda with lime) and put them together into one dish. I added a few more ingredients--goat cheese, arugula and a balsamic vinaigrette, and ended up with a Salad Plate of Asparagus Bruschetta with Spiced Almonds, Along With Mini Tomatoes & Pear. It's a little random and scattered and I think it suits Muriel well. ;-) Pears are still in the market and the more spring-like ingredients like asparagus, arugula and tomatoes are locally produced here most of the year. 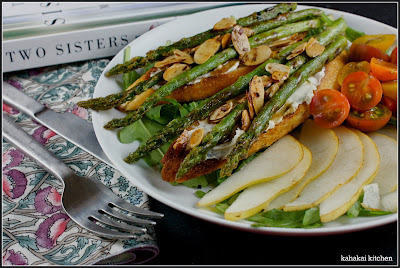 Recipe Outline: (You could as Muriel did, buy the spiced almonds (and the vinaigrette too), but I have included the recipes I used below if you prefer to make them yourself.)

Prepare baguette and asparagus by lightly brushing pieces with olive oil. Heat a grill pan over high heat until very hot. Place long slices of baguette in pan and toast until  browned and crisp, turning once. Remove bread and set aside. Add asparagus and grill for a few minutes--until tender-crisp--turning with tongs to sear all sides.

Combine ingredients in a bowl or glass jar. Stir or shake gently until blended. Taste and adjust seasoning as needed.  Store extra in refrigerator.

In a small bowl, mix almonds with olive oil until evenly coated. Sprinkle with spices and stir, ensuring spices are blended and almonds coated.

Place coated almonds in a small pan and heat over medium. Toast until lightly browned, stirring or shaking pan as needed, being careful not to burn nuts. Remove from heat, spread out into single layer and let cool. Store cooled nuts in an airtight container. 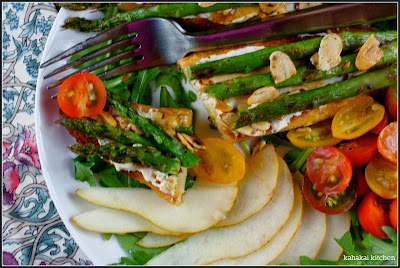 Notes/Results: There is a lot going on with this plate but thankfully, it all works together. The crisp and toasty baguette with tangy goat cheese compliments the asparagus and spiced nuts and the pear, and the little tomatoes add a nice sweetness that contrasts well with the peppery arugula. Serve it with a knife and fork--it's a little messy (or be like me and pick up the bruschetta with your fingers and enjoy it). 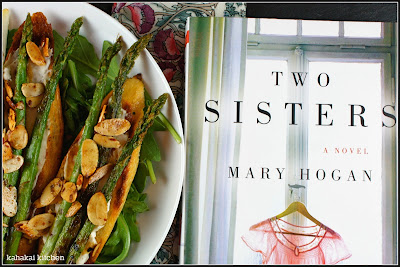 Note: A review copy of "Two Sisters" was provided to me by the publisher and TLC Book Tours in return for a fair and honest review. I was not compensated for this review and as always my thoughts and opinions are my own.