I'm hosting Food 'N Flix this month! The chance for all of us movie-loving-foodies to watch a film and then hit the kitchen to make a dish inspired by it. My pick for March is the 2006 quirky comedy-drama-romance-fantasy film Stranger Than Fiction, starring Will Ferrell. 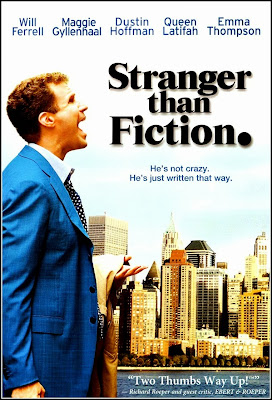 It's hard to explain this movie in any detail without a bunch of spoilers and I think it is best to let the story unfold on its own. So, in two sentences, Stranger Than Fiction is the story of Harold Crick, a solitary IRS auditor--very much fixated on numbers and routine. One morning as he is brushing his teeth, Harold hears a strange female voice that seems to be narrating his life as it happens and it begins to effect him in all sorts of ways.

I really like this film--the story is smart, different and makes you think, and the cast is made up of many of my favorites. Ferrell, Emma Thompson and Maggie Gyllenhaal are joined by Dustin Hoffman, Queen Latifah, Linda Hunt and Tony Hale (for any Arrested Development and Veep fans). This is a sweeter, calmer Will Farrell performance by the way and the movie allows his dramatic acting talents to shine. 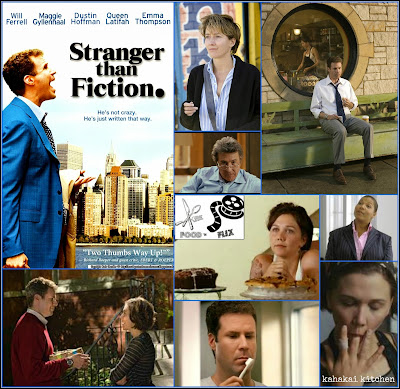 It's not the 'foodiest' of Food 'N Flix picks (especially if you compare it with February's movie--the total food-centric film, Babette's Feast) but, Stranger Than Fiction does have a food presence. Much of it is related to baking as the always charming Maggie Gyllenhaal plays Ana, a baker that Harold audits and falls for. I defy any foodie not to covet Ana's fun & funky bakery and, if you don't want a soft, warm, melty cookie after the cookie scene, well then my friend...YOU HAVE NO SOUL! (Just kidding!) ;-)

I do think that there is enough food and ideas tucked into this movie to inspire some fabulous dishes--baked or otherwise, and maybe even some that will be stranger than fiction themselves.

I look forward to seeing what everyone makes!

Want to join in the Food 'N Flix fun? Here's how to participate:


Deadline for submission is Sunday March 30th
(I'll be rounding up all the entries here shortly after.)