The Book Tour Stops Here: A Review of "After I'm Gone" by Laura Lippman with Easy, Vegan Potato Latkes

There is a certain symmetry to the fact that this is my 35th turn as a TLC Book Tour Host and the book that I am reviewing is the latest novel from Laura Lippman, the author of my very first TLC book tour. My review for Lippman's novella "The Girl in the Green Raincoat" posted February of 2011, was my introduction to her books and since then I have enjoyed several of her other books. After I'm Gone is her newest novel, a character-driven mystery that quietly builds suspense by weaving a story that spans decades in the life of a family, while following a retired detective tasked with working cold cases and determined to solve an old murder. 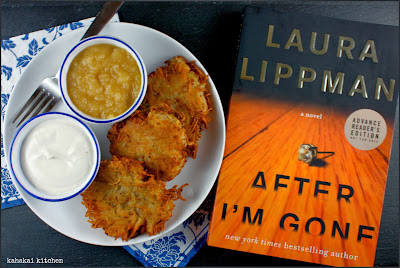 "When Felix Brewer meets Bernadette “Bambi” Gottschalk at a Valentine’s Dance in 1959, he charms her with wild promises, some of which he actually keeps. Thanks to his lucrative—if not all legal—businesses, she and their three little girls live in luxury. But on the Fourth of July, 1976, Bambi’s comfortable world implodes when Felix, newly convicted and facing prison, mysteriously vanishes.

Though Bambi has no idea where her husband—or his money—might be, she suspects one woman does: his mistress, Julie. When Julie disappears ten years to the day that Felix went on the lam, everyone assumes she’s left to join her old lover—until her remains are eventually found.

Now, twenty-six years after Julie went missing, Roberto “Sandy” Sanchez, a retired Baltimore detective working cold cases for some extra cash, is investigating her murder. What he discovers is a tangled web stretching over three decades that connects five intriguing women. And at the center is the missing man Felix Brewer.
Somewhere between the secrets and lies connecting past and present, Sandy will find the truth. And when he does, no one will ever be the same." 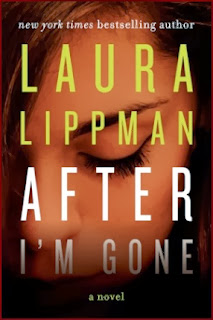 The book starts out with the 1976 disappearance of Felix Brewer before jumping to 2012 when detective "Sandy" Sanchez, looking for the next cold case to spend his time on, opens an 800-page file and becomes intrigued by the murder of Julie Saxony. Saxony, a former exotic dancer and the girlfriend of Felix Brewer, was presumed to have left to join him ten years after he escaped prosecution--until her body was discovered in a Baltimore park in 2001. The story then goes back and forth between present day and the past--from Felix meeting his wife, Bambi, in 1959, and through the ensuing years, showing the effects Felix's choices and his fleeing had on his wife, three daughters and his mistress.

The book started out a bit slow for me, there were a lot of characters to keep track of and the alternating time periods had me going back to the beginning of the chapters to remind myself where we were at. I also found many of the characters somewhat unlikeable and thus hard to attach to for the first half of the book. After I'm Gone, required some patience to "peel back the layers" of the characters and discover their secrets and the motivations for their behavior but it was worth it--the second half has plot twists and turns that ratchet up the suspense. I like it when I am convinced I am right about whodunnit and the whys behind it and then things change and I end up surprised at the end. Lippman definitely achieved that element of surprise for me and made the book well-worth the slower start. Lippman fans, readers with the patience to let a mystery unfold, and lovers of character-driven novels and family dramas will enjoy this book.

Author Notes: Laura Lippman grew up in Baltimore and returned to her hometown in 1989 to work as a journalist. After writing seven books while still a full-time reporter, she left the Baltimore Sun to focus on fiction. The author of two New York Times bestsellers, What the Dead Knowand Another Thing to Fall, she has won numerous awards for her work, including the Edgar, Quill, Anthony, Nero Wolfe, Agatha, Gumshoe, Barry, and Macavity. 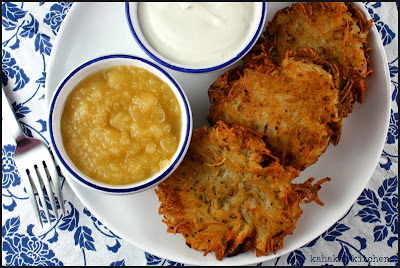 And now for the food... There is some food presence in After I'm Gone. Even if Baltimore doesn't seem to be a particularly inspiring food mecca, I get the feeling from her books that Lippman is at least bit of a foodie. Food mentions mainly range from the catered fare at events like weddings, parties, and a bat mitzvah, to traditional Jewish dishes at family get-togethers and holidays. Detective Sandy seems to hit a lot of diners, Howard Johnsons  and the occasional Subway, although he had his own Cuban restaurant that failed and longs for a good Cubano sandwich. Latkes appeared a couple of times in the book and finding it hard to resist fried potatoes of any kind, I decided to make a small batch of these pancakes as my dish inspired by the book. 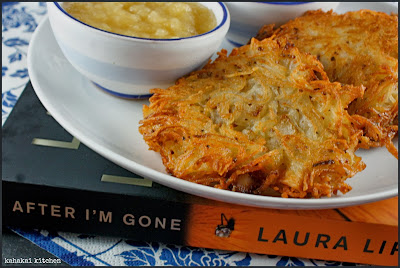 Latkes are traditionally cooked on Hanukkah to commemorate the miracle of the menorah oil in the Jewish Temple. Latkes are traditionally made from potatoes (shredded), with eggs, onions and salt. Sometimes herbs/spices are added for flavor and Matzo meal, breadcrumbs or flour may be added in to help bind everything together. I didn't go traditional with my latkes--choosing an easy vegan recipe from Vegetarian Times--mainly because I forgot to buy more eggs. ;-) I served them with a little applesauce and leftover vegan sour cream (from these Blinis with Beluga Lentil 'Caviar' and Cashew Sour Cream) as the recipe suggested. 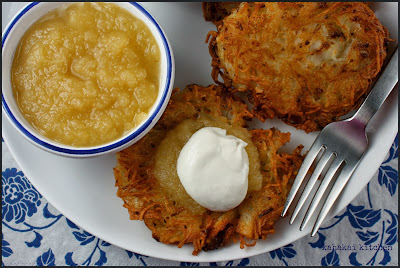 Vegetarian Times says, "Jason Johnstone-Yellin created this vegan version of potato pancakes after his Jewish wife kept saying "they're not as good as my mom's." Now he's working on a vegan cookbook: Cooking with Tamara's Husband."

Fry patties 3 to 4 minutes per side, or until golden brown. Cook remaining latkes in batches of 2, adding 1 tablespoon oil to skillet each time.

To drain, transfer latkes to wire rack on top of baking sheet lined with newspaper. Place latkes on pan in oven to keep warm. Serve with vegan sour cream or applesauce.

(*Note: The current online recipe doesn't list the mustard but in reading the reviews, I noticed a couple of people brought up that it had previously called for it and that it "made" the latkes so I added it into mine.)

Notes/Results: I was really pleased with how these turned out--perfectly crisp--especially around the edges and they tasted great. For my first latke-making, I think I did pretty well. ;-) Not traditional of course--but, the stone ground mustard added a nice layer of flavor that contrasted nicely with the sweet applesauce and slightly tart cashew sour cream. I used my spiralizer (cutting the potato so it would make short 'strings') and I think the super-thin shreds made them even crispier. They actually held together quite well. I used my ice cream scoop and packed the mixture into it, flattening them with the spatula when they hit the pan. I used one large baking potato and 1/2 an onion and it made 5 good-sized patties. I would definitely make them again. 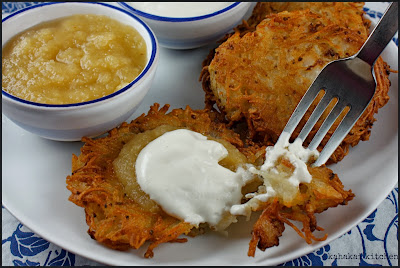 Note: A review copy of "After I'm Gone" was provided to me by the publisher and TLC Book Tours in return for a fair and honest review. I was not compensated for this review and as always my thoughts and opinions are my own.