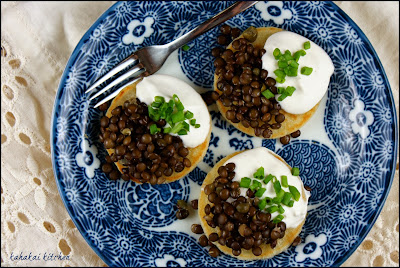 Babette's Feast the 1987 Danish film based on a story by Isak Dinesen is often called the pinnacle of foodie movies and it's our Food 'N Flix February movie, hosted by Camilla of Culinary Adventures with Camilla. It has been years since I watched this movie and watching it again reminded me of it's simple grace and beauty.


"Throughout the world sounds one long cry from the heart of the artist: Give me the chance to do my very best."
--Babette, Babette's Feast 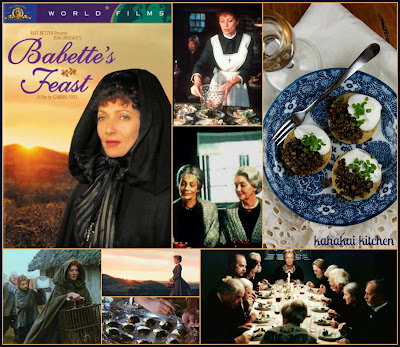 Set in 19th century Denmark, Babette's Feast is the story of two adult sisters, the daughters of the leader of a fairly austere, pious church sect in a small village. Since their  father's passing, the daughters serve the church and its elderly congregation living simply and doing good works. Babette, a French woman, shows up on their doorstep asking for refuge and they take her in as their cook and housekeeper. After many years of service, Babette wins a large sum of money and asks the sisters if she may cook them "a real French meal" for the supper they are having to honor what would have been their father's 100th birthday. They somewhat reluctantly agree to let her purchase the ingredients and cook the dinner but, they have concerns about what this decadent supper says about their faith and spiritual principles. I won't say more than that because I love the way the story unfolds and I think you should just rent, stream, or buy it and watch this wonderful film. 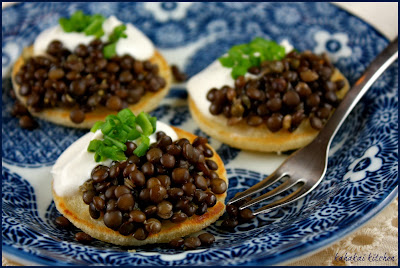 Babette's Feast is full of food--from the not-so-appetizing soup of brown bread and ale and the dried fish that seems to make up the basic diet of the congregation, to the incredible dinner that culinary artist Babette creates for her guests of turtle soup, blini with caviar and sour cream, baby quail in pastry, endive salad with walnut vinaigrette, a gorgeous cheese and fruit plate, a beautiful cake with glacéed fruits and several fine wines and champagne. 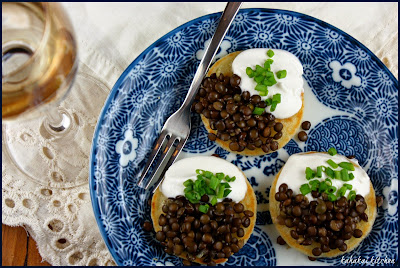 I decided to do a veg-friendly version of Babette's 'Blini Demidoff au Caviar'--the buckwheat blini topped with caviar and sour cream. I am not a big caviar fan although I don't hate it and have eaten it a few times over the years and (purportedly) even partaken of the 'good stuff.' I guess fall somewhere in the middle of the Tom Hanks scale--in between spitting it out and making faces as in Big and selfishly scraping all of a caviar 'garnish' onto my own plate as in You've Got Mail. But, I do really like the little black lentils called "beluga" lentils for their resemblance to caviar.

I thought it might be fun to do a vegan version of the dish with a cashew sour cream and the lentils. In the end, I got lazy and bought my blinis and since they have milk and eggs in them, it ends up as a vegetarian rather than a vegan dish. (There is not a lot of difficulty in making blini and one of the recipes I looked at for inspiration has a great vegan blini, however I simply did not have the time or inclination to locate buckwheat flour and 'futz' with making them this week--and the pre-made ones are much better looking than I am sure I would do!) Still these ended up being a fun, tasty and elegant little appetizer.

Beluga Lentil 'Caviar' w/ Cashew Sour Cream on Blinis
By Deb, Kahakai Kitchen (inspired by this recipe and this recipe) ;-)

In a small pan, combine lentils, water and kombu pieces and bring to a boil. Reduce heat to simmer, partially cover and cook until lentils are just tender, about 20 minutes.

Drain lentils and discard kombu. While lentils are still warm, stir in vinegar, caper brine and minced capers. Season to taste with sea salt and black pepper. (Lentils should taste a bit salty/briny.)

Refrigerate for an hour or two. Drain any excess liquid before assembling on blinis. 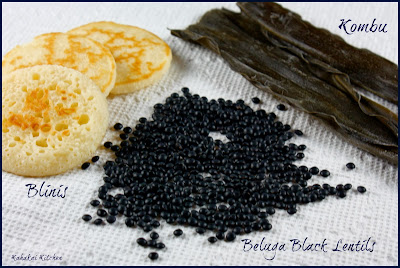 Soak cashews overnight in a bowl of water. Drain and rinse.

Place drained cashews into high-speed blender with lemon juice, vinegar and sea salt. Blend until completely smooth, scrapping down sides and adding additional water in small amounts as needed. Place in airtight container in fridge for an hour or two to blend flavors. Cashew cream will thicken/firm somewhat as it chills.

(Note: I bought a pack of 16 mini blinis and both the lentil and cashew cream recipes make more than enough but I use the leftovers in other things. The amount you can make will depend on the size of your blinis and how much you put on them.)

I assembled my blinis (after lightly toasting my store-bought blinis) as Babette did with a small scoop of the lentils on one side and a scoop of the cashew sour cream on the other side but for easier snacking by hand, spreading the sour cream on first and topping them with the 'caviar' keeps the lentils from rolling off. ;-) I also added some finely chopped chives for color. Enjoy! 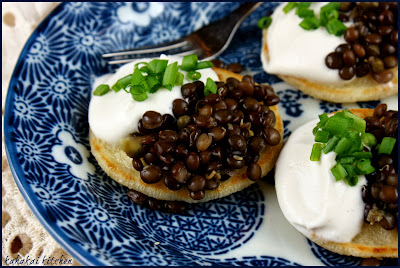 Notes/Results: A great little bite with a good contrast of taste and texture. The lentils have a briny flavor from the kombu, capers and red vine vinegar which goes well with the creamy and just slightly tart cashew sour cream. Although these take a little advance prep--soaking the cashews, cooking and cooling the lentils--they go together in a snap (especially when you cheat and don't make your own blinis!) ;-) so you can quickly put them together for an easy addition to a party appetizer selection that both carnivores and veg-friendly guests would like. I would make them again.

The deadline for February's Food 'N Flix is today--so if you missed this round, please join us for March when I'll be hosting the quirky 2006 comedy-drama-fantasy film "Stranger Than Fiction"--staring Will Ferrell, Maggie Gyllenhaal and Emma Thompson, here at Kahakai Kitchen. An announcement post will becoming soon.