One of my favorite cuisines to cook and eat is Indian food. From warm curries to cooling raitas, I love the exotic ingredients and flavors. We are lucky enough to have a well-stocked Indian market here on Oahu, so finding ingredients is fairly easy. If you find cooking Indian food daunting, Quick-Fix Indian: Easy and Exotic Dishes in 30 Minutes or Less by Ruta Kahate, sets out to prove that tasty Indian cuisine can be done quickly and easily at home. 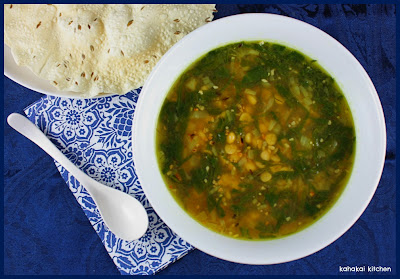 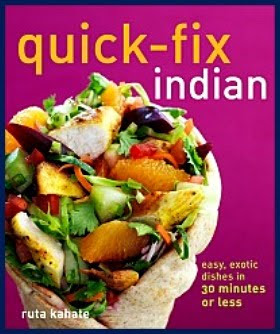 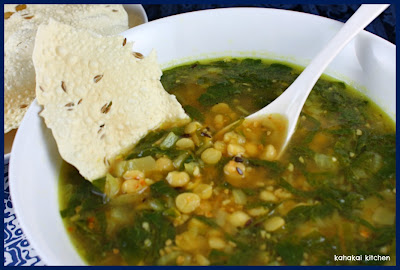 Ruta Kahate says, "Dal, the soupy preparation made from dried lentils or beans, is the foundation of Indian Cooking, the one protein eaten in every corner of the subcontinent, whether you're a vegetarian or not. This recipe adds spinach for twice the flavor and goodness. It makes a delicious soup, but you can also enjoy it over rice, as part of a larger Indian menu. Or just add a piece of crusty bread and call it supper."

Rinse and soak the channa dal in hot water to cover for at least 10 minutes or up to 4 hours.

Drain, top with 3 cups of fresh water, and bring to a boil. Turn down the heat to medium, cover, and cook until the dal is soft but still retains its shape--about 20 minutes.

While the dal is cooking, heat the oil in a medium saucepan. Saute the onion and whole cloves until the onion is well browned. Stir in the turmeric and coriander, then add the spinach and cook until soft.

When the dal has softened, pour it into the spinach, add the remaining cup of water and salt to taste, and bring to a boil. Turn down the heat and simmer for 4 minutes.

Heat the ghee in a small skillet over medium-high heat. When the ghee just begins to smoke, add the cumin seeds and cover. When the sputtering stops, add the garlic and cook until well browned. Pour over soup and serve hot.

Notes/Results: Simple and full of good flavor. This would be a great starter soup for someone not sure of all the spices and exotic flavors of Indian cooking as it isn't at all overpowering. The onion, turmeric, coriander, cumin seeds and garlic provide plenty of flavor but it is fairly subtle. If you can't find the channa dal, any lentil would work. This is a healthy and nourishing soup--vegetarian as written and made vegan by omitting the ghee and using oil instead. Rather than serving it with rice, or crusty bread, I crisped up some spiced papadums--Indian cracker like bread to dip in and scoop out bites. Quick and easy to prepare, I will make this again. 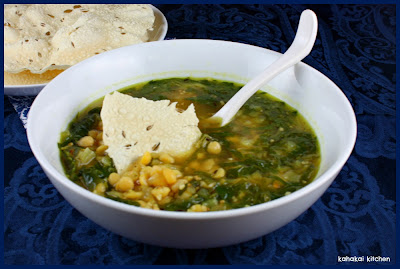 I intend to cook much more from this book. In fact, I keep going back to the other recipe I have tried so far--One Minute Channa. It is nothing more than a can of chickpeas tossed with fresh lemon juice and a a bit of the author's garam masala--a spice mix of toasted and ground cumin seeds, coriander seeds, cardamom pods, black peppercorns, cloves, fennel seeds, cinnamon and a pinch of salt. So simple, but so addicting as a snack or salad. 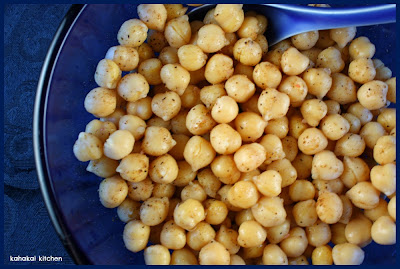 Ruta Kahate is an accomplished chef, author and culinary travel guide who places her own modern and simple twists on classic Indian cooking. The recipes are written clearly and don't have overly complicated steps or impossibly long lists of ingredients, making Quick-Fix Indian an excellent resource for those who may be new to cooking Indian food or those more experienced cooks who want tasty food that's faster and easier to make than some recipes in more traditional Indian cookbooks.

Note: I received a copy of Quick-Fix Indian from the publisher (Andrews McMeel), however I received no monetary compensation to review it. As always, my thoughts, feedback and experiences cooking from it are entirely my own.

This soup is linked up to Sunday Night Soup Night at Easy Natural Foods and Cookbook Sundays over at Couscous & Consciousness.

Let's see who is in the Souper Sunday's Kitchen this week and what they brought.


Lee Ann from Cooking on the Ranch is here with a hearty Boulder Beer Porter Stew. She says, "Made with a Boulder Beer Planet Porter, a beer whose flavors reminds one of a good quality strong coffee mixed with a bite of dark berry serves as a great platform for a robust bowl of stew.  A long simmer in this flavorful broth, chunky vegetables, buffalo top roundsteak, all infused with lots of rosemary, results in a flat out wonderful savory rich flavor." 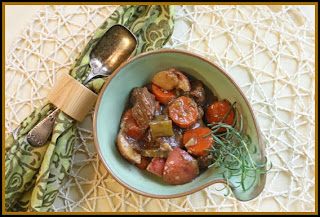 My pal Kim from Stirring the Pot made creamy Fresh Corn Chowder from Rick Bayless and says, "It is amazing!  So, if you're saying to yourself that a thick creamy chowder isn't what you want to eat during the summertime I hope you'll reconsider because the time to make this chowder is now.  Now, while fresh corn is in season. ... This chowder is mild and creamy and what's more...my husband, who almost never likes soup, loved it!" 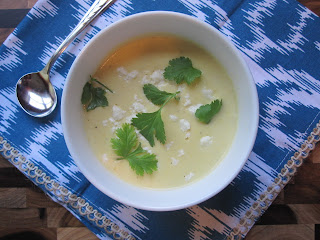 Debbie from Easy Natural Food made Curried Golden Beet Soup and says, "Golden beets are typically steamed or roasted. They are great in salads, soups or as a side dish, providing a cheerful yellow splash of color and a wonderful sweet, earthy taste (but milder in taste than red beets). ... I had a large bowl of this soup in the fridge and ate it over several days, and it just kept getting better as the flavors blended over time." 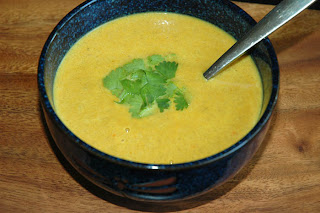 Janet from The Taste Space has both a soup and a salad this week. First up her Appaloosa Bean Summer Chili. Janet says, "Named after the colourfully dappled horse, these are incredibly pretty beans. At least before they have been cooked. They keep their shape well and don’t have any strong flavours. They worked well in this summer chili with zucchini, red pepper and tomato. The red wine brought a robust depth of flavour and the summer flavours really shined through." 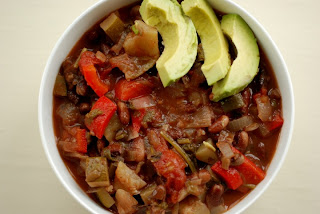 Janet also made this Curried Couscous Pilaf Salad with Peas and Currents and says, "This is a quick salad to put together, but you still get the benefits from assembling each part separately. First, toast your couscous/quinoa/millet and cook it with stock to up its flavour. Next, saute some onions and add some zip from the toasted curry powder, cumin and a hint of cinnamon. Peas make this a filling salad and currants add a touch of sweetness to balance out the dish.  I can see why this is such a knock-out salad at potlucks!" 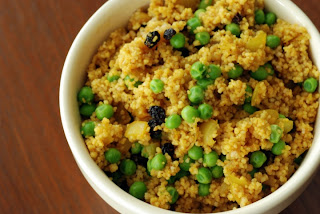 Some hearty and nourishing dishes this week--thanks to all who joined in. If you have a soup, salad, or sandwich that you would like to share, just click on the Souper Sundays logo on my side bar for all of the details.