I think for most people, the film Sideways doesn't necessarily conjure up visions of a bowl of Corn and Cheese Chowder. Corn chowder isn't a central character in this wine-filled comedy, but it does have a small walk-on part. On a double date between wine-loving sad sack Miles and intelligent waitress and horticultural student Maya, along with randy actor and soon to be married Jack paired with sassy winery employee Stephanie, the waitress mentions that corn chowder is the soup of the day. I heard that and thought, "I want some corn chowder..." and there was my inspiration. ;-) The fact that the "corn lady" has been parked at the Park-and-Ride near my house the last few Fridays selling sweet local corn just sealed the deal. Corn chowder would be my Sideways-inspired dish for Food 'N Flix. 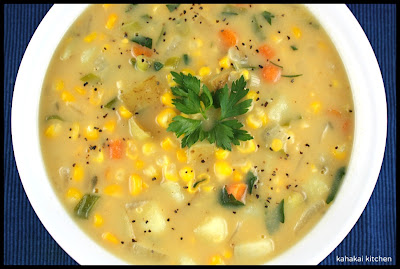 Sideways is our Food 'N Flix movie selection for May, hosted by Tina of Life in the Slow Lane at Squirrel Manor. There is definitely more wine than food in this movie as it takes place on a vino-fueled mid-life crisis road trip to wine country and features a terrific cast; Paul Giamatti, Virginia Madsen, Thomas Hayden Church and Sandra Oh. Miles (Giamatti) is a divorced and depressed English teacher trying to get a book published, and the trip is his wedding gift to his best friend and college buddy Jack (Hayden-Church), an actor, who wants to sow some more wild oats before settling down. Miles is attracted to Maya's (Madsen) intelligence and knowledge of wine, while Jack begins to romance Stephanie (Oh), not mentioning the fact that he is about to be married. It's a smart comedy and although I frequently find myself wanting to smack both Miles and Jack for many varied reasons, it is an entertaining film. 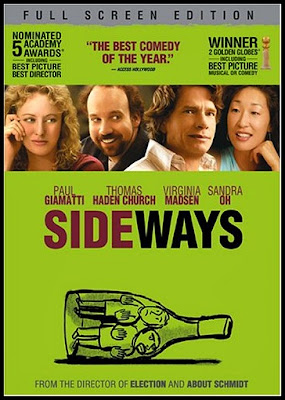 My Sideways-inspired Corn and Cheese Chowder comes from Love Soup by Anna Thomas, my favorite soup cookbook for both recipes and inspiration. There is wine in it--in this case a crisp Pinot Grigio (it's what was open). The chowder is vegetarian as written but I decided to make it dairy free and vegan by substituting out the milk, butter and cream with non-dairy alternatives. (My changes are in red below.) The chowder turned out creamy and lightly cheesy but not heavy, so the dairy wasn't missed 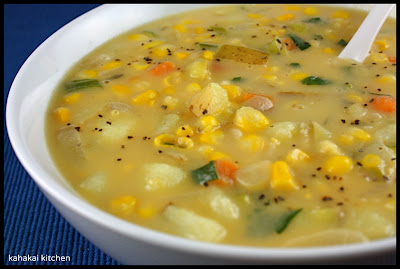 Thomas says, "In my very first cookbook, The Vegetarian Epicure, I had a recipe for a corn and cheese chowder. I looked it up recently and saw that it called for...1 1/4 cups of heavy cream! Whoa! Then I laughed and thought, Those were the days. I was a young university student and thin as a rail. But corn and cheese chowder was one of my favorites, so I made it again and let it evolve with my current style of cooking: less cream, more corn, no flour, plenty of fresh herbs. It's a delicious corn chowder for modern times. (If you're still in school, go ahead and pour in another cup of cream - I don't mind.)"

Scrub the potatoes, cut them in 1/2-inch dice, and put them in a large soup pot with 3 cups (750 ml) water, the bay leaf, the sage, and a teaspoon of sea salt. Bring the water to a boil, lower the heat, and simmer for 5 to 6 minutes.

Meanwhile, chop the onion coarsely and saute it in the oil and butter with a pinch of salt over medium heat, stirring often, until it is translucent and browning in spots, about 15 minutes. Add the onion to the soup, along with the milk, broth, cream, corn and sliced green onions. Bring the soup back to a simmer and let it bubble for another 6 to 7 minutes.

Toast the cumin seeds for a few minutes in a dry skillet, and then grind them in a mortar or a spice grinder. Add the cumin, parsley, a pinch of hot paprika, and some black pepper to the soup. Taste the soup, and add more salt if needed. Stir in the white wine if you wish.

Keeping the soup at just below the simmer point, slowly stir in the grated cheese, allowing it to melt smoothly into the soup. From this point onward, you cannot let the soup simmer or boili, as that would curdle the cheese. If you need to reheat it, do it carefully, watching and stirring. 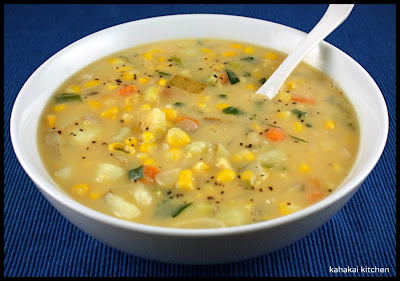 Notes/Results: A velvety and delicious bowl of soup. I like how the herbs and spices--fresh sage and parsley, bay, paprika, ground cumin seeds and hot paprika, work together. Nothing stands out but they all harmonize to bring great flavor. I was a little worried about how well the shreds of non-dairy cheese would melt but it melted well. It's not perhaps as "gooey" cheesy as real cheese, but the flavor is there and it adds to the texture. It's a filling and satisfying soup but not too heavy. Excellent, and I will make it again. 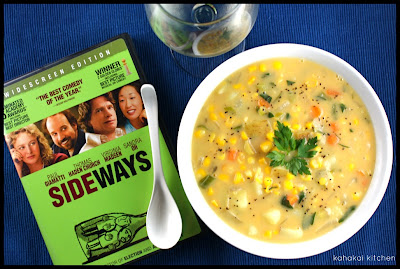 The deadline for this month's Food 'N Flix is May 30th, and Tina will be rounding up the entries at Life in the Slow Lane at Squirrel Head Manor shortly after. If you missed this round and love food and movies, June's selection is a favorite of mine, Mistress of Spices, hosted by Culinary Adventures with Camilla.

I am also linking it to Sunday Night Soup Night!, hosted by Debbie at Easy Natural Food and Sue's Cookbook Sundays at Couscous and Consciousness.

Now, let's check out who is in the Souper Sundays kitchen.

Janet at The Taste Space has this hearty Ethiopian Split Pea Puree (Kik Alicha) to share and says, "...I tried the version from Olive Trees and Honey which had simpler ingredients: split peas, onion, garlic, and oil. It also called for a chile and I obliged by using one green chile.  With the bountiful onions and garlic, this was flavourful, and not spicy at all with only one green chile. Mild, but not distracting. Creamy yet not oily. This was how it was meant to be.  To make it even more luscious, puree the dish or partially mash." 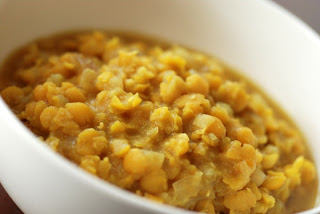 Graziana of Erbe in Cucina made Tarragon Stracciatella (Egg Soup) and says, "This is the time of the year when I realize that winter is over, and so I rush to prepare some recipes that I forget to prepare! Despite the spring there are some gray and windy days, and I take this opportunity to cook for the last time some recipes perhaps more suited to a cold season, as this hearty egg soup. I added some tarragon to this soup and also to the croutons. Its slightly spicy aroma was perfect with the taste of eggs and beef broth." 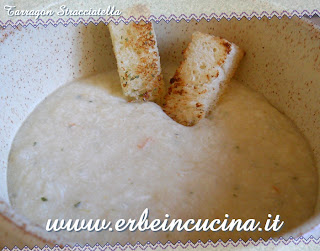 Debbie of Easy Natural Foods has a flavorful Tomato Vegetable Soup to share and says, "This is a simple but tasty vegetable soup that I made to use up a variety of different vegetables in my fridge. Sometimes I get a little carried away at the farmer’s market and buy more produce than I end up using in a week, but fortunately there is always soup to take care of any extras." 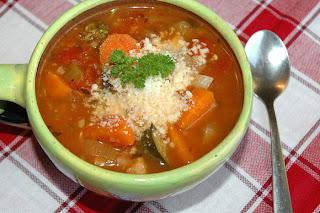 Heather of girlichef made this colorful Avocado-Mango Salad with Gorgonzola, Bacon & Toasted Pepitas and says, "I definitely consider this a meal-salad.  The texture and flavor layers are insane.  Butter lettuce is crisp, yet soft and velvety.  Sweet juicy mango.  Creamy avocado.  Smoky, salty bacon.  Earthy toasted pepitas.  Pungent cheese.  All drizzled in a dressing that is all kinds of nutty, tangy, sweet, and hot all in the same mouthful." 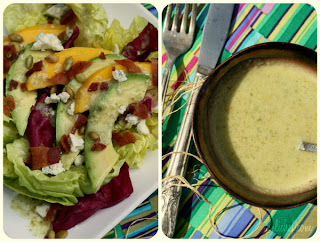 Pam of Sidewalk Shoes shares a salad this week and says, "I call this my Everyday Salmon Salad. Why?  Because it’s so easy you could make it everyday and it’s so good you could eat it everyday! So, for this salad, while the salmon was broiling I grabbed some baby greens from the fridge, found some carrots and radishes, which I gave a quick whirl with the shredding disk on my food processor and put it in a bowl.  When the salmon was done, I flaked it into the bowl, tossed with a homemade vinaigrette, a little more salt and pepper, some fresh bread and that was dinner.  Dinner in less than 15 minutes." 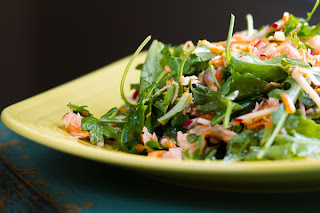 Carol of There's Always Time to Cook made some tangy Quick Pickled Cabbage Slaw to go with her Korean-Style Steak Tacos and says, "It was a gorgeous day, perfect time to grill. The June magazines have tons of grilling recipes so I started to flip through the piles of magazines I have just waiting to be read and found plenty of recipes I put on the list to try. Tonight grilled steak taco's won out. They always do." 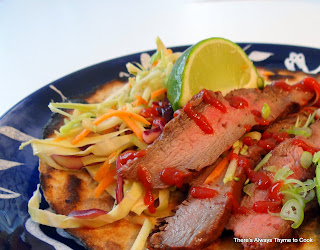 Some wonderful dishes this week--thanks to everyone who joined in. If you have a soup, salad, or sandwich that you would like to share, just click on the Souper Sundays logo on my side bar for all of the details.

Have a happy, healthy Memorial Day Weekend and week!