What do you get when you put something mild and subtle together with something that is tart, lively and a little surprising? You get a tasty Potato-Leek Soup with Lemon and Dill inspired by the food-friendly romantic comedy, My Big Fat Greek Wedding. 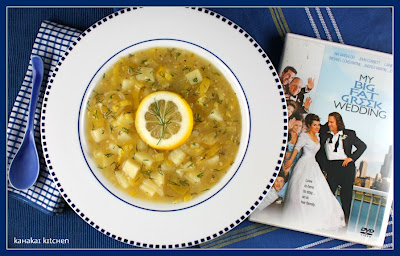 It's my pleasure to be hosting Food 'n Flix for February, bringing together some of my favorite pastimes; cooking, eating and watching a good movie. I emailed Food 'n Flix's founder, Heather of girlichef and requested (begged?) to host this film because every time I watch it, it makes me laugh and feel good. If you have not seen My Big Fat Greek Wedding (and I insist that you must!), you can read my description of it here. It's a movie about family, culture clashes and love between Toula, a nice Greek girl with a big crazy family, and Ian, her non-Greek beau who is the only child of quiet, WASP parents. Although food is not the dominant plot line in this film, it is (along with Joey Fatone), a fun supporting character. From the Portokalos family restaurant, Dancing Zorba's, to the platters of spit-roasted lamb, to the Bundt, Mrs. Miller brings to dinner, to Ian being a vegetarian, and the constant offering of food to everyone--food is sprinkled in throughout. 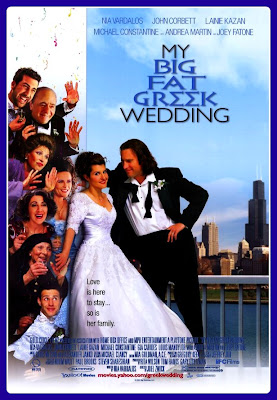 Ian gives Toula his love and makes her happier than she has ever been, and Toula and her family bring a zany spark that Ian's life has been missing. For my dish inspired by the movie, I wanted to capture some of that spark and I stumbled across this soup which livens up a classic recipe with lemon and dill, giving it a Greek-ish feel. Since Ian "don't eat no meat!" and I am still on my 28-day Engine 2 Challenge--eating a plant-strong, meat, dairy and oil-free diet, It seemed like a great choice and something that could be served to either the Portokalos family or the Millers with success. The recipe comes from You Won't Believe It's Vegan!: 200 Recipes for Simple and Delicious Animal-Free Cuisine by Lacey Sher and Gail Doherty and I made a few changes in red below, to remove the oil and to bump up the lemon and dill flavor throughout the soup. 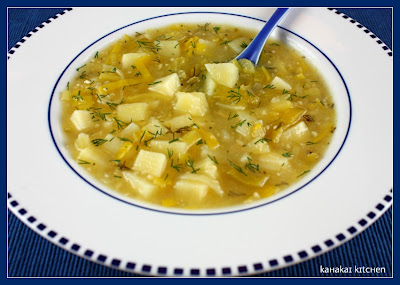 You Won't Believe It's Vegan says, "The lemon and dill we add to this traditional soup gives it a lightness and zip that's missing in the country classic." 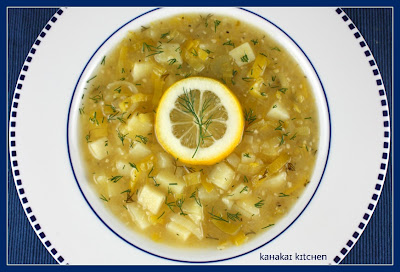 Potato-Leek Soup with Lemon and Dill
Adapted from "You Won't Believe It's Vegan!"
(Serves 4-6)

In a 4-to6-quart stockpot, sauté the celery, onion, garlic, and one leek in 2 tablespoons of the olive oil until softened. (I omitted the olive oil and sautéed in a bit of low sodium veggie broth.) Add the potatoes and broth, and bring to a boil . Turn down the heat to a simmer and cook until the potatoes are soft, approximately 15 minutes. Season to taste with salt and pepper.

In a separate pan, sauté the remaining leek over medium-low heat in the remaining 2 tablespoons of oil until crisp but not burned. (I omitted this step.)

Garnish each bowl of soup with some dill, the crisped leeks, and a lemon sauce.

Chef's Tip: If you want a thicker consistency, blend half the soup in a blender before garnishing. 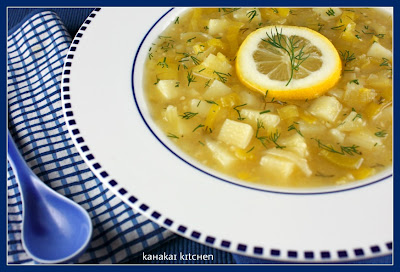 Notes/Results: I am a big fan of the classic potato-leek soup and I like how the dill and lemon really liven it up with a sunny kick of flavor. As you can see from my notes above, I bumped up the amounts of some of the key ingredients--to make it both heartier and to give more flavor. Taking out the oil reduced the calories--a cup is only about 114 calories, made it E-2 Challenge approved, and it wasn't missed. I am sure the sautéed leeks would be fabulous on top but I was fine without them and really enjoyed this soup, with some bread, for a light but satisfying meal. I would make this again. 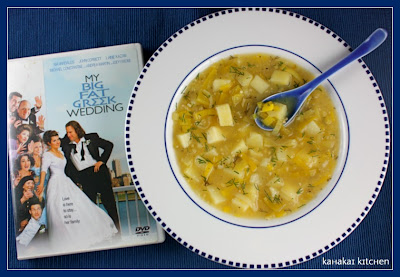 If you would like to join in the Food 'n Flix fun with My Big Fat Greek Wedding, you have until Monday, February 27th to watch the movie and make and post a dish inspired by it. (Details for participating are here.) You can also join us for the March pick, Last Holiday, hosted by La Cocina de Leslie, and see the film line up for the next few months here.

Now let's take a look into the Souper Sundays kitchen and see who we have waiting.

Margo of SaucyCooks.com has The Best French Onion Soup to share and says, "What is it about French Onion Soup that has such an allure for me? When I was in high school, I sliced up some onions, boiled them in beef broth, added some bread, covered it in the first available cheese (mozzarella) and was sorely disappointed when it didn’t taste like what would be served in a French restaurant.OK, so I’ve learned a few things along the way and now know that in order to make this soup, the onions require caramelization. The broth needs to be seasoned with herbs and simmered to blend all the flavors and mozzarella is not exactly the right cheese to use." 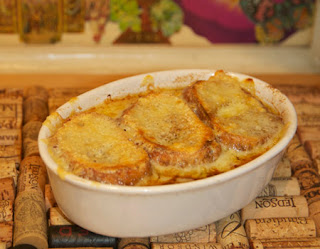 Tigerfish of Teczcape-An Escape to Food made this Chinese Vegetables Superior Broth Soup and says, "When it comes to winter, the body usually needs better blood circulation. Consuming warm fluids to facilitate good blood circulation is essential throughout the day, and soup is one of the sources to get "warm fluids" into the body; and especially when soup can be incorporated into our daily meals, it helps to keep us hydrated and warm inside. When a soup base or I call, broth of essence, is made from ikan bilis (Dried Anchovy), onion, garlic, ginger, dried scallops (conpoy), homemade chicken stock - it speaks downright comfort flavors no matter how plain it may look. Don't underestimate this plain-looking soup, looks can be deceiving." 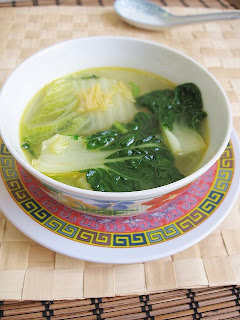 It's famous British chef Delia Smith's hearty Bean, Bacon, & Parsley Soup filling up the soup bowl of Heather of girlichef this week. Heather says, "'I've been in the mood for lima beans lately...so when I came across a recipe in one of Smith's books that combined them with bacon and onion (sigh...heaven-scent. Yes, scent.)...I didn't turn another page. I knew what I was making. This soup has a surprising amount of flavor and is creamy, delicious, and chunky all at the same time." 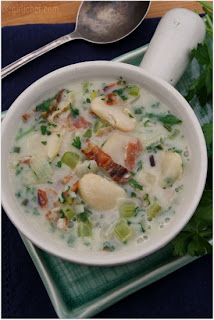 It's so nice to have Carol of There's Always Thyme to Cook back with us this week. She says, "Specifically you should make this soup, Black Bean and Ancho Chile Soup with Roasted Chicken, Cilantro, and Lime. I got pretty ambitious with this one, ambitious for me anyway. Made the stock from scratch from a roasted chicken the night before. Usually I'd use a boxed stock and save homemade strictly for matzoh ball soup. And usually from raw pullets. I never thought to use the carcass from the roast chicken before, it made a great stock. I got almost a quart from one roast chicken. And the leftover meat wasn't all mushed up from being boiled for hours. This was excellent." 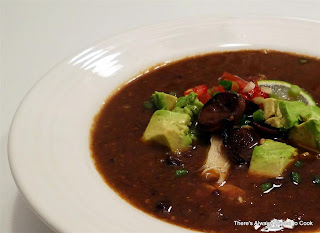 Joanne of Eats Well With Others is sharing a creamy Carrot and Tahini Soup this week and says, "If you have anything against all this soup. If you're getting bored of it. If you think it's kinda weird/strange/unusual that someone so against drinking calories...drinks them nightly in the form of blended carrot tahini mush heaven. Then you should probably speak now. Or forever hold your peace. ... This soup is a new favorite. Melissa Clark, whose recipe it is, gets it right just about every time, but this really is exceptional. Sweet, nutty, with just a hint of spice. It's an addiction in a bowl. No recreational drug flashbacks necessary." 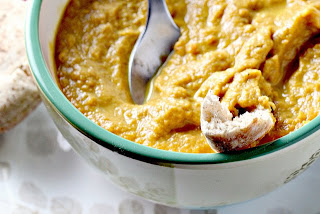 Janet from The Taste Space has a soup and a salad this week. First is this Pickle Soup and Janet says, "Truly, pickle soup is a misnomer. Yes, there are pickles in it but it is not a dominant flavour. Just like vinegar and lemon juice are added to enhance the balance of a soup’s flavour, pickles do the exact same thing here. They add that salty and acidic touch.So if this isn’t a pickle soup, it is a soup filled to the brim with veggies! It has an Eastern European flavour profile with dill and cabbage but it also has a hint of thyme. The veggies are bountiful, making this a huge pot of soup – leek, delicate oyster mushrooms, celeriac, carrot, turnip, Swiss chard, cabbage, red bell pepper – as well as barley." 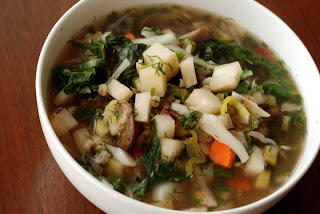 Janet's second dish, this colorful salad, came from the ingredients for a less successful recipe lacking flavor. Changing it up, Janet says, "I veered towards an alternative route, towards a Mango, Black Bean and Quinoa Salad with a Sesame Orange Dressing, that I ended up adapting from Eating Well. Bonus broccoli, of course. After trying the first dish, this was a much better alternative. Light and fresh. Bright with the mango with subtle flavours from the fresh orange juice, toasted sesame oil and cilantro. I added toasted sesame seeds to highlight more of the sesame flavor." 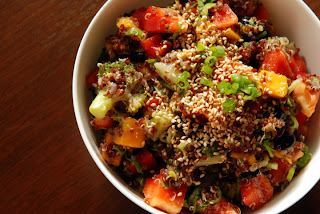 Here's a healthy Sprouted Mung Bean Salad from Judee from Gluten-Free A-Z Blog who says, "Notice the little mung beans in this salad. They are sprouted and packed with nutrition. Sprouting is a super easy way to add extra protein , nutrition, enzymes, and antioxidants to your diet. Sprouts are very low in calories and low in carbs to boot! ... Mung is a small bean that is dark green in color. It is sold in Indian food markets, Chinese food markets,health food stores, and on Amazon. It makes the typical bean sprout that you find in Chinese recipes. The mung bean salad was fresh and delicious and different than our typical nightly salad." 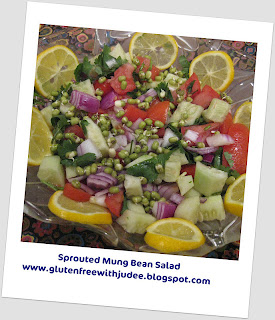 Please join me in welcoming Victoria of Tastes of the Sun, who joins us from San Miguel de Allende, Mexico with this Winter Salad with Roasted Beets and Citrus Reduction. She says, "This is such a straightforward and refreshing salad for winter--or anytime! When I decided to make this salad, I knew I might not find the radicchio (I rarely do here in San Miguel), but otherwise, the ingredients are readily available and easy to find. As for the citrus reduction--it is such a perfect dressing for the beets. The result? A delicious, healthy salad perfect for colder days." Welcome to Souper Sundays Victoria! 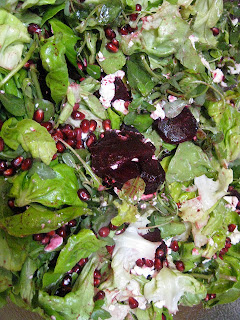 Such wonderful soups and salads this week--many thanks to everyone who joined in! If you have a soup, salad, or sandwich that you would like to share, just click on the Souper Sundays badge on the side bar for all of the details.
Have a happy, healthy week!