Since it's New Year's Day, I should probably be eating a soup with black eyed peas or long noodles or one of the other traditional good luck foods for a new year. Ah well, timing was never my strongest quality. Instead I bring you a velvety rich soup with a slightly unusual combination of ingredients like parsnips, turmeric, chile flakes, grainy mustard and cheese. 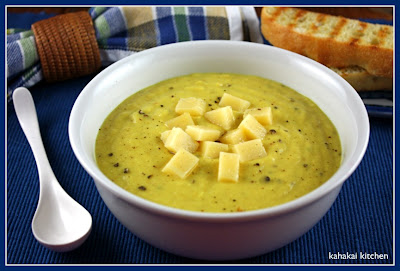 The recipe is from Tender: A Cook and His Vegetable Patch by Nigel Slater. (BTW: It's a great book for the bedside table as Slater's food writing is just as absorbing as the hundreds of recipes contained in this thick book) 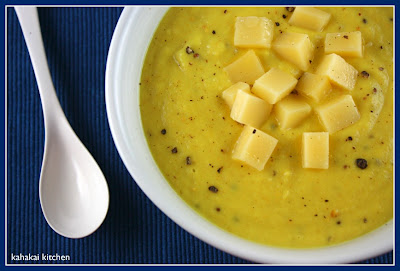 Slater says, "...It's during these cold, gray sky days that I sometimes feel as if I live on soup. Roots--fat carrots, artichokes, and woody parsnips--are part of the lineup, along with onions and the occasional potato. I take pleasure in something that can be both earthy and velvety at the same time. Rather like my gardening gloves." 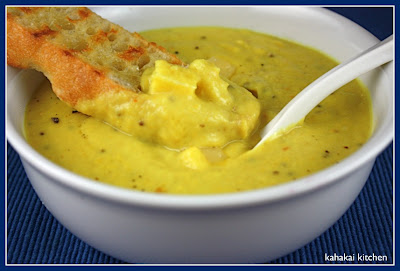 Peel and coarsely chop the onion and parsnips. Melt the butter in a large, heavy pot, add the onion and, once it started to relax, add the parsnips. Peel the garlic, squash it flat, then add it to the pan. Cook over medium heat, lid on, until the onion has colored lightly and the edges of the parsnips are mostly golden. Resist disturbing the vegetables too much as they cook: a slight browning of the parsnips here and there is essential to the flavor of the soup.

Sprinkle a dusting of flour into the pot, stir in the chile flakes and turmeric, then cook for a minute or two to remove the raw taste of the flour. Add the stock, stir, and bring to a boil. Decrease the heat to let the soup to sit at a light boil and continue until the vegetables are soft, about twenty minutes.

Pour into a blender or food processor and whiz to a creamy puree. Add the cream and mustard and salt and freshly ground pepper
to taste. Drop the cubes of cheese into four warm soup bowls, then ladle the soup over. Serve Immediately. 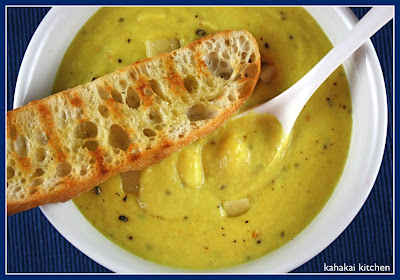 Notes/Results: A very rich soup full of flavor. I wasn't sure how well everything would come together but it does--even better with a little lemon juice to brighten it all up. There is a slight sweetness from the parsnips--an earthiness too, a kick from the chili flakes, a tang from the mustard, and the nuttiness of the the cubes of cheese, which soften nicely in the warm soup. With some grilled bread it is a warming and satisfying supper and a sunshiny yellow from the turmeric. I would make this again. 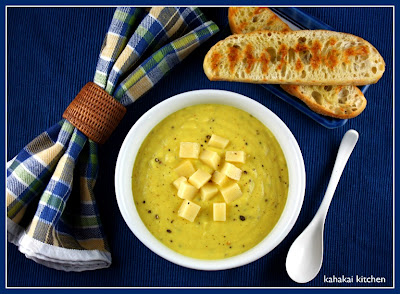 I am sending this soup along to Sue's Cookbook Sundays, at Couscous & Consciousness, where you will find links to some great dishes and great cookbooks.

Now let's take a look into the Souper Sunday kitchen on this first day of 2012.

Heather of girlichef made some gorgeous green Posole de Camarones (Shrimp and Hominy Stew) as part of her holiday meal and says, "We rarely do formal on Christmas. This year we had Carnitas con Mole with stacks of steaming tortillas along with our Ponche Navideño. And we had a big pot of Posole de Camarones...the color of which just begs to be made on Christmas. It's beautifully green broth flecked with hints of red from the chiles de arbol that accent the tangy lime sea salt." 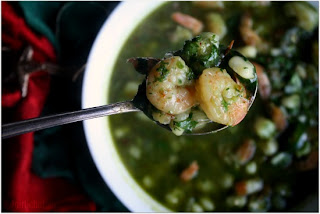 Janet of The Taste Space has two salads to share this week. First up is this Warm Lentil Salad with Caramelized Onions and Brussels Sprouts, about which she says, "I based this dish off of my Mujaddara, which is a Middle Eastern dish lentil and rice dish with caramelized onions. I replaced the rice with caramelized roasted Brussels sprouts, omitted the cinnamon from the simmering lentils and added some toasted pecans. A simple warm salad that is more than the sum of its parts. The earthy lentils lend a base of the sweet yet earthy sprouts, contrasted by the sweet caramelized onions with a crunch from toasted pecans. And the Brussels sprouts? They taste like little dense cabbage. Sweet, after the roasting." 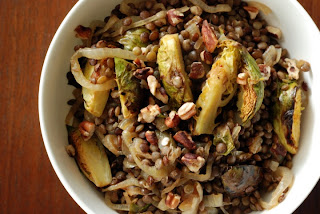 Janet's second salad is this New Year's inspired Garlicky and Lemony Black-Eyed Pea and Kale Salad. She says, "If you use canned beans (or peas?), this is a wickedly fast recipe to make. However, I made my own BEPs from scratch. Adding the vegetable broth, bay leaves and onion really boosts the beans since it all gets absorbed by the beans. Combined with the garlic, lemon, and kale, this is a tasty pot of beans that is low in fat but full of flavour. Yes, there are 6 cloves of garlic, but they are cooked and more subdued. You can eat it hot from the pan, but I preferred the chilled leftovers – perfect for lunch on New Year’s Day or your next potluck." 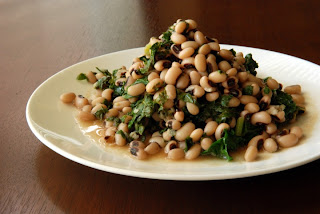 My friend Sue from Couscous & Consciousness made this pretty Wild Rice, Black Cherry & Goat Cheese Salad. She says, "I came across a recipe for "Whole Grain Rice Salad", which certainly sounded wholesome enough, but that seriously doesn't sound like celebration fare, now does it? Still the picture in the book looked pretty and a read through of the ingredients convinced me that this dish could indeed be a festive dinner. Now, really, don't you think that a dish of wild rice, studded with black cherries, toasted hazelnuts, goat cheese and tossed with a cherry vinaigrette, and which looks like this, deserves a better name than Whole Grain Rice Salad?" 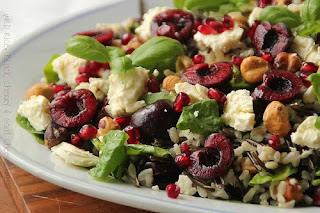 Joanne of Eats Well With Others has a colorful Garlic-Roasted Butternut Squash and Kale Wheatberry Salad with Pomegranate to share and says, "My gift to my family this year was a week's worth of vegetables, a lifetime supply of antioxidants, and vitamin A levels that are through the roof. (And fiber. Lots and lots of fiber.) All in the form of a nice compact, user-friendly salad. This, my friends, is the epitome of the "gift that keeps on giving". It will give you lower cholesterol. It will give you a smaller waistline. It will give you orange skin (if you eat it for every meal for a month on end. Which some may or may not be wont to do). It will give you the ability to eat two slices of rainbow cookie cake for dessert without even a hint of guilt. And it will probably give you superpowers.** **Results are not typical. Individual responses may vary." 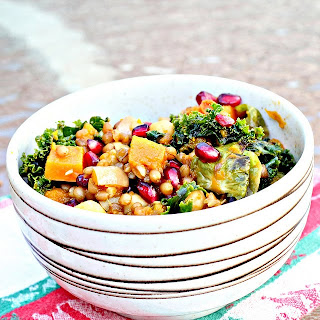 Foodycat made some delectable Bacon Jam and used it for this equally yummy Chicken, Bacon Jam & Tomato Sandwich. She says, "his stuff is ambrosial. Anyone who likes strong, salty flavours like tapenade or Gentleman's Relish would like the complex sweet, sharp and earthy flavour of this bacon jam. We gave it a first run for a quick lunch on a sourdough sandwich of leftover roast chicken, with sliced tomatoes and roast garlic mayo. A really fabulous (and lettuceless) variation on a BLT." 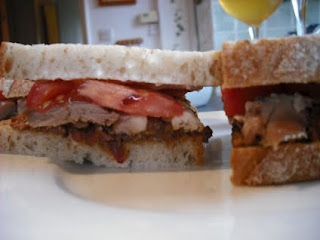 Speaking of delectable, I need to give a shout out to the Burgers with Dan Lepard's Slider Buns that Foodycat made last week. Our wires crossed and I didn't get them posted until after the day after the Souper Sundays round up last week. If you didn't see them last week, go take a look. 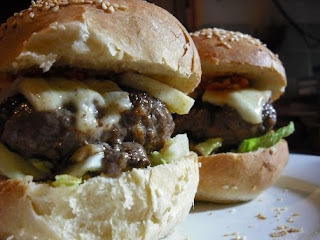 Thanks to everyone who joined in this week. If you have a soup, or salad or sandwich that you would like to share, just click on the Souper Sundays badge on my side bar for all of the details.

Don't forget, you have until Tuesday to win a copy of a great read, A Discovery of Witches by Deborah Harkness. Click here for all of the details.

Have a happy, healthy week and a wonderful New Year!