You have to love the lentil. They are cheap, low-fat, and full of fiber, protein, iron and potassium. All that makes for a nutritious and satisfying soup. This Roasted Garlic Dijon Lentil Soup uses a paste of roasted garlic and Dijon mustard to brighten up the flavor and firm French green lentils for texture. 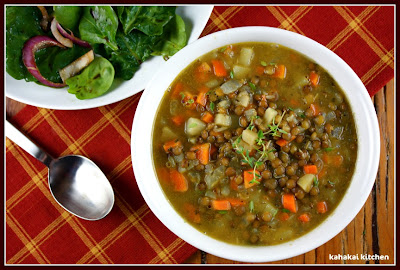 The recipe comes from the Cafe Flora Cookbook: More Than 250 Vegetarian and Vegan Recipes from the Renowned Seattle Restaurants by Catherine Geier with Carol Brown. Having eaten at Cafe Flora multiple times when I lived in Seattle, I was happy to find the cookbook at a used bookstore for a great price. I have many recipes tagged to make, but unearthing a jar of French green lentils in my pantry moved this soup to the top of the list. 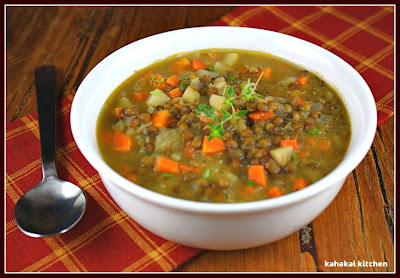 Cafe Flora says, "Here we add a paste of roasted garlic and Dijon mustard to the pot which adds a sharp, clean tang to an otherwise earthy soup. We use French green (Le Puy) lentils for this recipe since they hold their shape and don't get mushy when cooked." 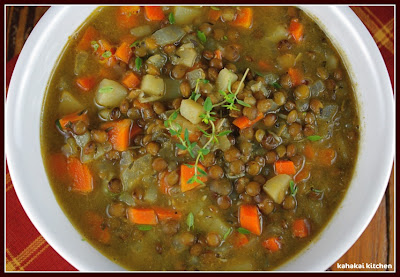 Roast the Garlic: Preheat oven to 350 degrees F. Toss the garlic cloves with the olive oil and put in a small baking dish. Cover with foil, and roast until soft, about 30 minutes. Drain the oil from the roasted garlic into a heavy-bottomed soup pot.

Make the Roasted Garlic and Dijon Paste: When the garlic is cool enough to handle, squeeze out the pulp into a small bowl. Add the Dijon mustard, and mix well. Set aside.

Sauté the onions and other vegetables: Heat the roasted garlic oil over medium heat. Add the onion and 1/2 teaspoon salt, and sauté until the onion is soft and translucent, about 10 minutes, stirring several times. Add the carrots, potato, and thyme, and sauté for 3 minutes more.

Simmer the Soup: Add the vegetable stock and lentils, and bring the pot to a boil. Lower the heat, and simmer until the lentils are tender, 25 to 30 minutes.

Stir in the Roasted Garlic Paste: Simmer soup for 10 minutes. Add a pinch or two of ground pepper and salt to taste, and serve.

Note: This soup will thicken as it sits, so you may need to add water or vegetable stock to get the consistency you want. 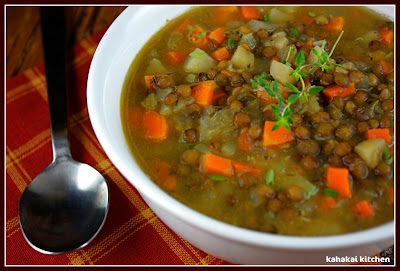 Notes/Results: A very flavorful and delicious lentil soup. I usually like to add a splash of vinegar to my lentils to bring out the flavors, and in the is recipe the Dijon does just that. And you can't argue with roasted garlic--nutty and mellow. I did add extra garlic--I had two partial heads and just threw them all in to roast. It was about 20 cloves instead of 12, but roasting the garlic makes it so sweet, it doesn't overpower. I also bumped up the mustard and thyme a bit. I like a little flavor punch. ;-) My small changes are in red on the recipe. It does get thick and stew-like after sitting. I like it that way, but if you like a thinner soup, keep plenty of veggie broth handy. The only thing I would do differently next time is to add some spinach or other leafy greens. I made up for it by serving it with a simple spinach salad, something the cookbook recommended. A keeper recipe that I will make again. 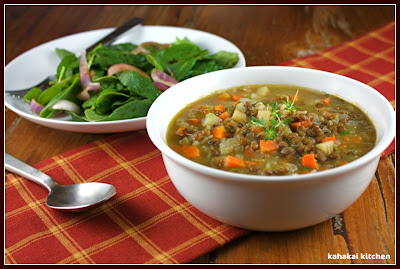 I am also linking this tasty recipe to Sue's Cookbook Sundays at Couscous and Consciousness.

Now let's take a look in the Souper Sundays kitchen because we have some great soup and salad recipes waiting.

First up, fellow Hawaii blogger Claudia from Honey From Rock is here with White Bean and Tuscan Kale Soup with Chestnuts. She says, "When I've just stashed batches of newly minted chicken stock, we're ready and running in the soup department. They're burning holes in my pockets, so to speak. So, I riffle through a cookbook or two to see what will appeal. This one had cannellini beans, kale, pancetta and chestnuts, a winter comfort meal if I ever heard one. Especially since there was a package of roasted peeled chestnuts lurking from Thanksgiving. ... It was so yummy, we almost polished off the whole thing at one sitting. And nicely warming on a cool evening." 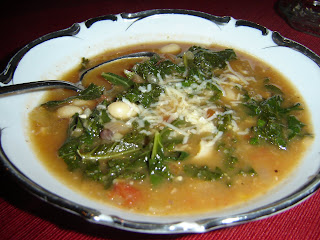 Lovely Graziana from Erbe in Cucina made homemade gnocchi with Parmesan and chives and put it too good use by adding it to soup. She says, "I served the gnocchi with a pumpkin and yams soup, aromatized with my homemade Asian Aromatic Mixture." And thus a very creative, hearty and warming Pumpkin, Yam Soup with Aromatic Homemade Gnocchi was born. 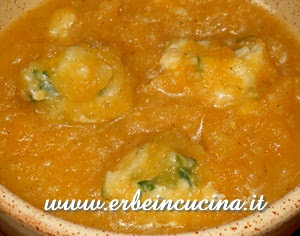 Speaking of hearty and warming, Janet from The Taste Space has that too in her Pumpkin Chili. She says, "While I have made other chilis before, this is definitely my favourite so far. A savoury saucy chili, filled with beans and vegetables. Flavourful, not spicy despite using jalapeno peppers. The pumpkin puree adds a touch of sweetness but doesn’t leave you with a pumpkin flavour. The TVP plumps up to look just like ground meat, it is almost confusing. What isn’t confusing is how great it tastes: delicious." 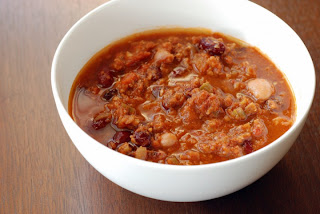 Elizabeth of The Law Student's Cookbook has a Broccoli-Cheddar Soup to share and says, "So while I’m sitting here shivering with my heater on and covered in blankets, I get to tell you all about my soup recipe that warmed me up from the inside out. I think that’s the best part of soup; it makes you soooo warm. This recipe was yanked out Food Network Magazine‘s October 2011 magazine on page 108. The soup is actually featured on the cover of the magazine also. It’s easy to make, it’s hearty, it warmed up my belly, and it tasted incredibly delicious." 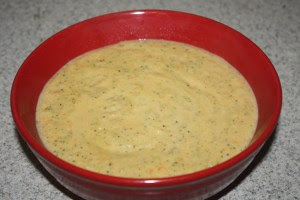 Heather of girlichef has a Buttercup Squash Soup w/ Cilantro, Toasted Almonds, & Fried Ginger Threads. She says, "The flavors sounded so enticing that once I started fantacising about how they would taste on my tongue, I knew I had to make it work. Really the solution was simple. Thin in out to adapt it to my tastes. I cut down on the amount of squash that the original recipe intended (3 lb). I also upped....waaaaay upped....the amount of "toppings". And it worked. I achieved a massively flavorful, squashy broth with hints of cinnamon and star anise that was perfectly complimented by the toasty, nutty flavor of the almonds, the bright cilantro, and the creeping heat of the fried ginger." 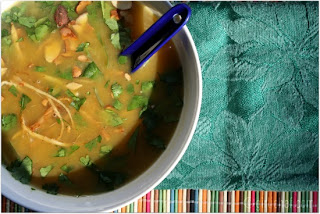 Corina from Searching for Spice is back with a comforting Leek and Bacon Soup and says, "...I’m sure you won’t be surprised that the main ingredient in this soup was leek, and if you like leeks, you will like it, although it’s so simple it hardly needs a recipe. And if you like bacon, and a little salty fatty kick to your healthy vegetable packed soup, then the fried crispy bacon pieces really finish off the soup well. I know bacon’s not really healthy, but you could tell yourself it’s just a garnish, and to add a bit of flavour, and you will be eating so many leeks in this that you don’t need to worry about it at all. In fact, I would even say you need the bacon to create a balanced meal!" 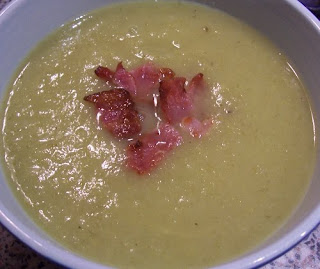 Akheela of Torview Toronto has a simple and healthy Cucumber Salad of tomato, onion, green chile, and cucumber of course, dressed with a simple lemony dressing. She says that you just "Mix the sugar, salt, pepper, green chillie, lemon juice together and pour it over the cucumber and tomatoes. Leave it for about 15 minutes and serve as a side dish." 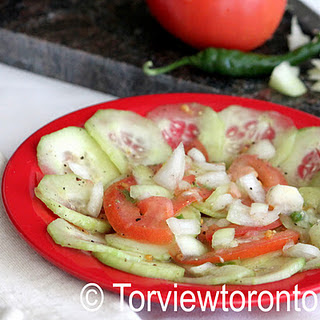 Say hello to Jaleela from cookbookjaleela, joining us from Dubai and making her first appearance at Souper Sundays week. She says, "For biriyani, I am preparing variety of salad and raita like veg , cucumber mint, beetroot peanut,coconut onion etc…….. Whenever I am making salad for biriyani I always prepare Sweet Cucumber Salad for me and my son. ... Quick salad for kids, very simple and easy. I like this salad very much since my childhood, now even its my son's favorite." Welcome Jaleela! 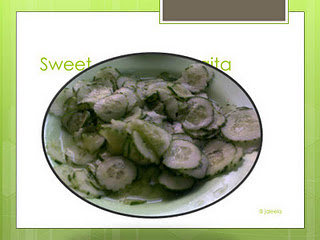 Joanne from Eats Well With Others made this colorful Spicy Squash Salad with Lentils, Brussels Sprouts, and Goat Cheese. She says, "Roasted butternut squash and brussels sprouts are tossed with some smoked paprika and cumin and then roasted until they are sweet, smoky and just a bit spicy. Mix em all up with earthy lentils, bitter arugula, and a really seductive goat cheese. And there you have a miracle in a very large and filling bowl." 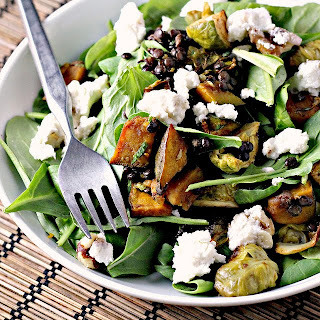 Some wonderful tasty dishes this week--thanks to everyone who joined in. If you have a soup, salad, or sandwich that you would like to share, just click on the Souper Sundays logo on my sidebar for all of the details.
Have a happy, healthy week!