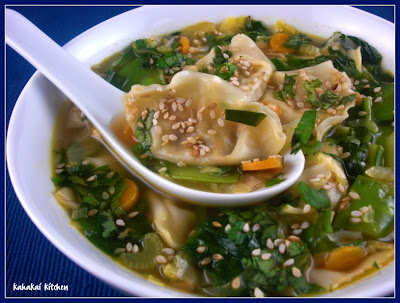 After a few rounds of cold soups this past month, compounded with a long and busy week, I needed a bowl of something warm and comforting, but quick and easy too. Leftover veggies and a package of pre-made spicy vegetarian wontons were the inspiration for this Simple Veggie Wonton Soup. A garlic and ginger spiced vegetable stock packed full of cabbage, carrots, celery, snow peas, baby spinach and the little wonton packages, it is a substantial but not heavy soup that is light enough for warm weather. 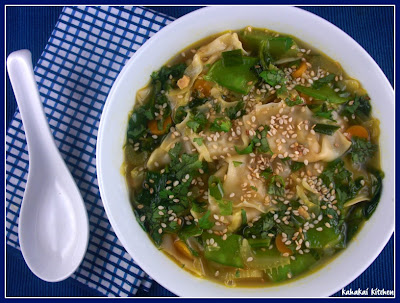 Cook wontons according to package instructions, drain and set aside.

Meanwhile, in a large pot, saute garlic and ginger in olive oil until soft and fragrant, about 2 to 3 minutes. Add vegetable stock, soy sauce, sesame oil and rice vinegar and bring to a boil, then simmer for about 5 minutes. Add cabbage, carrot and celery and simmer for another 10 minutes, until vegetables are softened. Add snow peas, spinach, and green onions and cook another 3 to 4 minutes. Taste and season with salt, pepper and chili paste as desired.

To serve, place a few won tons in each bowl and ladle the soup over them. Garnish with chopped cilantro and toasted sesame seeds and serve immediately. 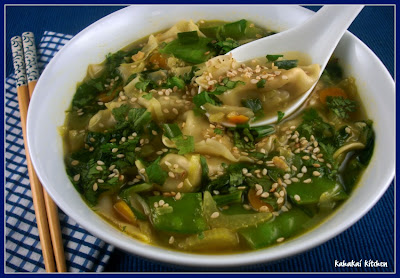 Notes/Results: Warming and flavorful. The veggies are cooked but still crisp, complementing the texture of the soft pillows of wontons. Since these were spicy vegetable wontons, they added a nice kick to the broth, but you can add more chili paste if you can only find plain wontons. Or, of course you can make your own wontons too if you have a little extra time. Comfort in a bowl in under 30 minutes and a good way to work in those all those healthy veggies, I would make this again. 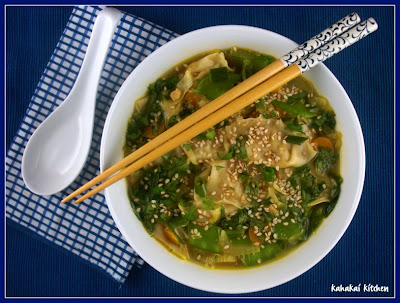 It's a little quiet in the Souper Sunday kitchen this week but we do have two delicious soups and five fantastic salads, so let's take a look.

Making her first appearance at Souper Sundays is Ramya from Ramya's Recipe..., blogging from the UK and here with a tasty Sweetcorn Chicken Soup. She says, "Hot Soups are a comfort food on cold evenings. Though it is summer here, last few days have been rainy and cold. This is one of the easiest soup and I made it specially for my daughter who loves sweet corn and chicken. This soup is very healthy too as I have not added even a drop of oil, but it still tastes yummy." Welcome Ramya! 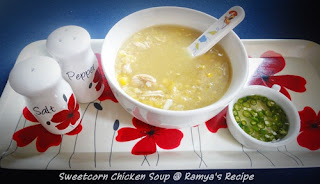 Akheela of Torviewtoronto made a Spiced Soup Rasam and says, "This is a flavourful soup that can be served before a meal or with a meal. It is tangy soup made with a combination of spices and healthy ingredients. Can drink this on its own or with rice, usually rasam is served as a starter when serving rice and curries. It can be strained and served if you prefer a clear soup and not to have the whole spice seeds while drinking." 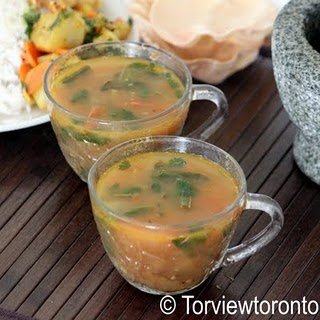 Pam from Sidewalk Shoes has a simple colorful Everyday Fruit Salad to share. She says, "I installed a calorie app on my phone. This has resulted in a lot of changes. A lot of negotiating. After a particularly bad day, I don’t do stressful eating anymore, I hoard and save up my calories so that in the evening I have 160 of them left. That’s for my gin and tonic. A necessity. The other thing I’ve learned. You can eat lots of fruit and vegetables. Lots. Instead of dessert, I’ve been making fruit salads. It’s fun. And colorful. And it doesn’t take many calories. I need to save them, you know." 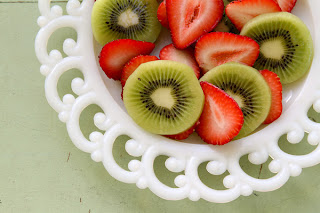 Tigerfish from Teczcape - An Escape to Food made some fun Quinoa "Sushi" - Zucchini Wrapped Quinoa Salad. She says, "Nothing is new here (quinoa salad, again!) except to eat it differently...the sushi-way. Using thin slices of roasted zucchini to wrap up quinoa salad. This quinoa salad is made from cooked turmeric-infused quinoa + radishes + bell peppers. Let's call it a popper salad! A playful mouthful of textures and mild flavors." 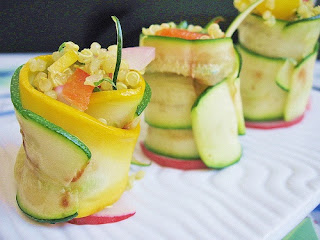 Elizabeth from The Law Student's Cookbook turned her Roasted Sweet Potato, Black Bean, and Shrimp Salad into a high-protein option. She says, "The night before I had made coconut shrimp for dinner. Thing is.. I didn't end up eating it, because I had forgotten I had dinner plans. But I didn't want the shrimp to go bad, so since they were thawed out I cooked them up and decided I could find a use for them later. Their use became apparent the next morning when I was throwing this salad together. In the shrimp went and up the protein increased to 23 grams!" 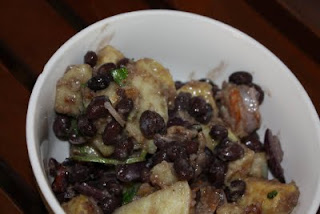 Janet from The Taste Space has two salads to showcase this week. About her 11-Spice Lentil Salad with Capers and Currents she says, "I had witnesses. We unanimously agreed this was a wonderful lentil salad! Sweet, savoury, and salty, deep and complex, warming yet refreshing… and quite addictive! I stuck with the base of the recipe, tinkering only minorly with the spices (decreased the pepper and chili flakes), and thought the capers and currants were fabulous. The ingredient list is long, with 11 different spices, but they really blend harmoniously." 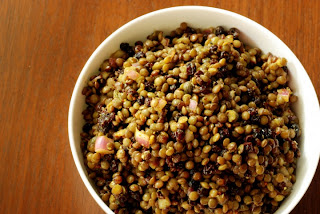 Janet follows the lentil salad up with Ottolenghi’s Cabbage and Kohlrabi Salad. She says, "Since it is cherry season in Ontario, I tried the salad with both fresh and dried cherries, and the latter are definitely the winner. Which means everyone wins, because then this becomes a year-round salad. I also decreased the amount of dressing while adding in more vinegar, increased the sprouts and substituted some dill seeds since I didn’t have enough fresh dill." 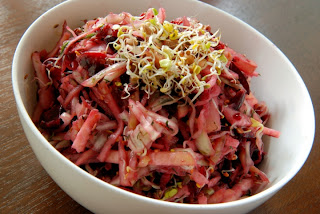 Some fabulous dishes this week! A big mahalo to everyone who joined in. If you have a soup, salad, or sandwich that you would like to share, just click on the Souper Sundays logo on the sidebar for all of the details.