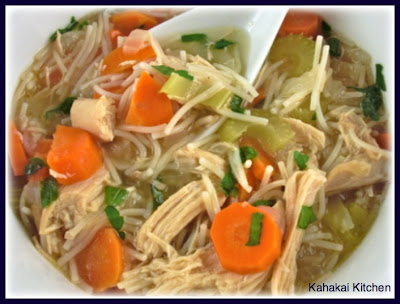 Giada's Lemon Chicken Soup is simple, relatively quick to make and full of bright lemony flavor, making it an easy choice for many circumstances.
In any case lemony chicken soup with plenty of chicken and noodles is always a good thing! 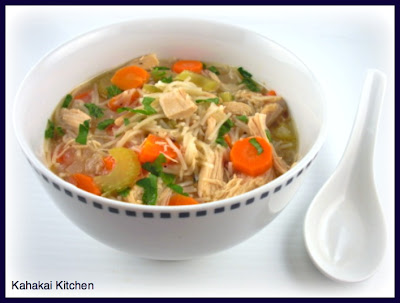 You can find the recipe in "Giada at Home" on page 55 or an adaptation can be found at the Food Network here.

In a large stockpot, bring the chicken broth, lemon juice and bay leaf to a boil over medium-high heat. Add the onion, carrots, and celery, and bring to a boil. Reduce the heat so the mixture simmers and cook until the vegetables are tender, 6 to 8 minutes.

Add the pasta and cook, stirring occasionally, for 6-8 minutes, or until the pasta is tender. Add the chicken and heat through, 2 to 3 minutes. Discard the bay leaf. Remove the pot from the heat. Stir in the cheese and the parsley. Season with salt, to taste. Ladle the soup into bowls and serve.

*Cook's Note: You can use any short pasta from your pantry as a substitute for spaghetti. 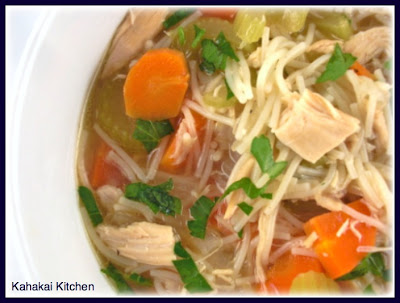 Notes/Results: Simple, tasty goodness. The homemade stock added so much flavor when combined with the lemon juice and the 3 cloves of garlic I added (I needs me some garlic in my chicken soup). I used not quite double the noodles--using up a package of of fideos noodles from the Latin mercantile (short, very thin vermicelli-like noodles) instead of broken spaghetti. Extra noodles soak up even more of the broth but I was craving a very noodly bowl and I don't mind adding a little extra stock when reheating the leftovers. Keeping it on the lighter side, I felt no need for the added cheese called for in the recipe but I am sure it would be delicious with it. A good, basic make-again chicken soup that hit the spot. 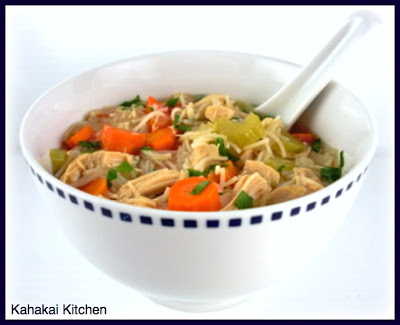 You can check out what the other IHCC participants chose as their Potluck dishes by going to the post here and following the links.

Now lets check out the Souper Sundays kitchen and see who is here this week.

Kim from Liv Life is here with a hearty Black Bean Stew with Butternut Squash and says, "Filled with vibrant butternut squash the stew was visually a sight for cold eyes. Chipotle chiles and a slightly spicy chili powder brought a warmth other than the actual physical heat of the dish, and the cilantro and pepper jack cheese brought a Mexican Chili-like flair to the steaming bowl of goodness. Pearl barley added a healthy fiber to the flavorful mix and the tender chunks of grass fed beef made the husband's spirits soar." 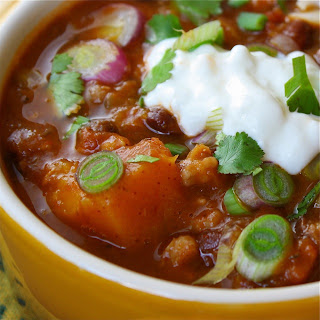 Rather than wasting it, Julie from Little Bit of Everything made the most a red pepper close to the end of its shelf life with this Roasted Red Pepper Corn Chowder and says, "I love the flavor of roasted red peppers, especially in soup. The original recipe called for 2 cups of roasted red peppers and 2 cans of creamed corn. I really don't like creamed corn, so I chose to just use the frozen corn. The texture of this soup was more of a broth and less of a cream soup. The red pepper gives this soup a wonderful rich flavor." 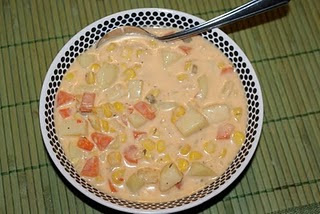 My friends Nat and Annie from House of Annie are back visiting Hawaii from Malaysia and managed to fit me in for lunch and make this healthy Chicken and Kale Soup--talk about multi-tasking. ;-) Nate says, "Annie and I love to cook with all kinds of vegetables, but kale is one that we hadn’t yet tried out yet. We found bunches of kale for sale at the KCC Farmers’ Market, and Mom bought them, along with some Swiss chard and red beets. Mom had a rotisserie chicken in the fridge, so we decided to make a broth with the chicken and add the kale to it – “simply hantam” style. We all clamored for seconds." 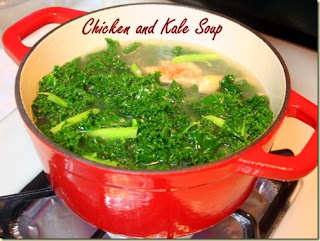 Roz from la bella vita made a big batch of her Favorite Spicy Hot Chili to share and says, "This chili recipe is a combination of a variety of recipes that I have married together throughout the years. It is though, fairly spicy in heat and includes three varieties of beans plus some corn. We just love it and I hope that you enjoy it too.Garnish with sour cream, Mexican cheese, and chopped green onion stems. Serve with fresh cornbread and/or tortilla chips." 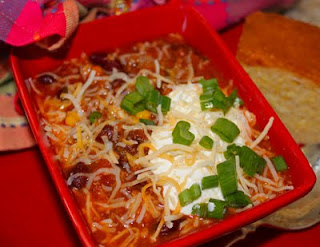 After a day of outdoor fun, my friend and fellow Cook the Books host Rachel, The Crispy Cook made a satisfying Hearty, Smoky Vegetarian Pea Soup and says, "Most pea soup recipes traditionally include a ham bone or bits of chopped ham, but I added a touch of olive oil and smoked paprika for my vegetarian version, full of chunky bits of other veggies. It was satisfying and restorative; just the thing for apres-tubing on a cold winter's night. And did I mention that Split Pea Soup is Cheap Eats? I figure it cost $3 or $4 to make this pot of soup, and we have enough for 8-10 mug servings." 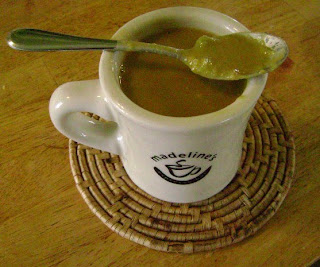 Spencer (aka The Mouse) of LivetoEatEat2Live Blog visited the factory that makes his favorite childhood Chinese egg noodles and stocked up. He says, "I had to restrain myself before I got carried away. I bought one cake of e-mein, one dozen buns, and one dozen dumplings. Don’t worry, we won’t eat them all at once (we’d be in a carbohydrate coma). ;-) For dinner I used up the rest of the mushrooms (see cream of mushroom soup post), and added Napa cabbage to a shiitake dashi with the e-mein to make a Noodle Soup. The Cat was happily surprised. Slurp." 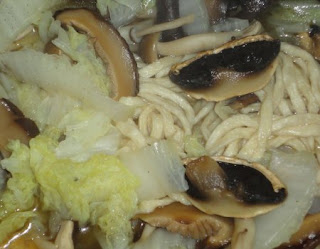 Joanne of Eats Well With Others went exotic with this African Curry Coconut Soup with Chickpeas. She says, "I found that I was craving curry. Shocking because I'm always craving curry. So I flipped through my copy of the Tropical Vegan Kitchen and somehow became enraptured by this curry coconut soup with chickpeas. And then when I looked it up on epicurious and found that it had gotten five stars and was loved by the better part of a hundred commenters, I was sold. I should warn you that I didn't make the recipe as is. It was a little meager, especially for those of us who had to run 14 miles the morning after eating it, so I bulked it up a bit with some extra beans, millet in place of brown rice, and a whole lot of greens. End result - craving satisfied." 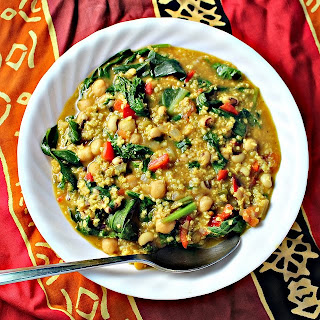 Please join me in welcoming Ana of Sweet Almond Tree joining us for the first time this week from Philadelphia with Chickpea Soup or Greek Revithosoupa. Ana says, "Revithia is the Greek word for chickpeas or garbanzo beans. I made revithosoupa for dinner today, and it was about time! We hadn't had it in a while, so it was good to eat a simple, meatless, warm bowl of soup. Revithosoupa is a filling Greek soup that is a standard in the Greek cooking repertoire. Some versions are kind of plain, others like mine are well flavored. Plain or spiced up this soup is good. It's the chickpeas that give it a lot of favor." We have one salad this week, this colorful Orzo with Vegetables and Chicken pasta salad from Shri at Tiffin Carrier Antic/que's! Shri says, "Brunch on Sundays is usually an Indian vegetarian -breakfast dish, but today we went with Orzo, two ways. A vegetarian version with plenty of vegetables and another one with a simple Chicken cooked with garlic, onions,black pepper and a touch of red wine and basil. ... Garnish with Parmesan/ Peccorino Romano Cheese and fresh chopped parsley." 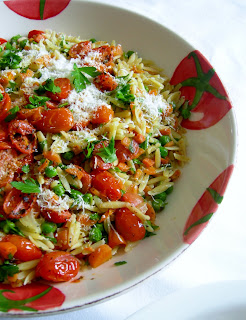 And one sandwich, a Proscuitto and Cheese from Janet at The Taste Space. She says, "Armed with a loaf of “rustic” fig bread (slightly sweet from the figs), 18-month-aged prosciutto (nicely flavoured), and taleggio (a mild cow’s milk creamy, soft cheese), we had the fixins for a super sandwich. With a limited number of ingredients, quality is the defining factor of your sandwich. I found the flavours worked really well, with the slightly sweet bread topped with the silky artichoke dip. Next, we topped it with overflowing arugula, laid a slice or two of prosciutto and lastly added a few pieces of silky, melt-in-your-mouth taleggio cheese." 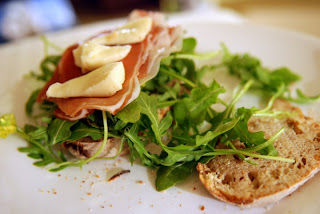 Some wonderful dishes again this week. Thanks to everyone who joined in. If you have a soup, salad or sandwich that you would like to share, just click on the Souper Sundays logo on my side bar for all of the details.
Have a happy, healthy week!