It's Potluck week at I Heart Cooking Clubs and (sniff :-( sniff), our last potluck with Mark Bittman, in fact there is just one more week of Bittman after this and then we switch to our new chef/cook, Giada DeLaurentiis. I wanted something that was fast to make, that I could make from items already in my pantry/fridge/freezer, and especially something that tasted great. I got them all with Bittman's Sesame Shrimp Toasts and Egg Drop Soup. 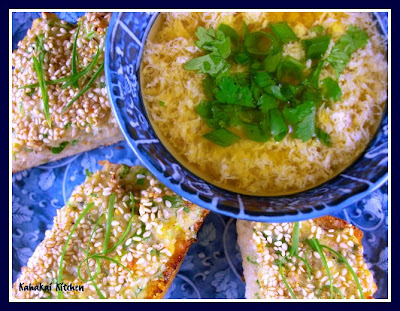 Both recipes are from my favorite Bittman book, "Kitchen Express.

" I know I keep saying it but if you don't own this book, add it to your list. Every single quick and easy recipe sketch I have made from this book has been delicious. It is the perfect book to have when you need a fast dinner from your pantry. 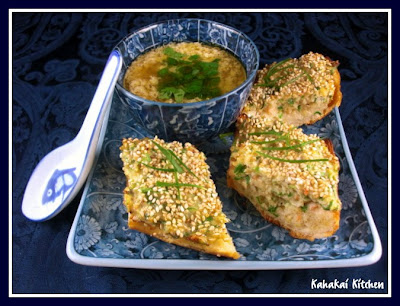 Bittman says, "Better than any version you've had in a restaurant."

Heat the oven to 475 degrees F. Slice a baguette in half lengthwise, put the halves face up on a baking sheet, and set them in the oven while it heats. Put shrimp in a food processor with some butter, scallions, soy sauce, a few drops of sesame oil, and a pinch each of sugar and salt. Pulse until the mixture forms a chunky pasta. Smear the shrimp paste all over the bread and sprinkle with sesame seeds. Bake until the shrimp paste is pink and cooked through and the bread is crisp, about 10 minutes. Cool a bit, then cut up and serve with a salad. (or soup!) ;-) 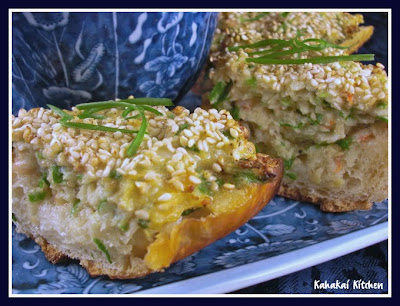 Bittman says, "Nothing could be easier."

Bring a quart of stock (chicken or vegetable) to a slow bubble; gently pour four beaten eggs into the stock while stirring. Add soy sauce to taste and garnish with some chopped cilantro or scallions; a little sesame oil is nice, too. 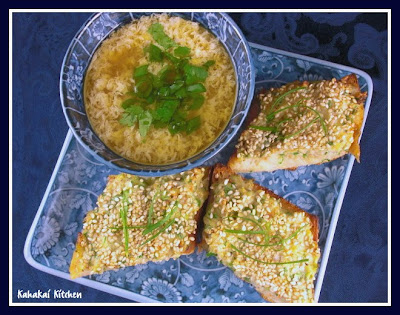 Notes/Results: A simple comfort food dinner that comes together in less than 20 minutes and tastes really good. Make the shrimp toasts, then while they are baking, make the soup. I just made a cup's worth of the soup with some homemade stock and one egg, and it was perfect with a few pieces of the crunchy / creamy shrimp toasts. I might add some frozen green peas the next time for a bit more color and texture. The shrimp toasts are really good with the thicker baguette bread and not oily like the ones you get in Chinese restaurants often are. They would work well as a fun and simple appetizer. I would make both of these recipes again.

You can see what the other IHCC participants made for their potluck dishes by going to the post here and following the links.

To double the Potluck fun, I am also sending these sesame Shrimp Toasts and Egg Drop Soup to the Friday Potluck Party at EKat's Kitchen.