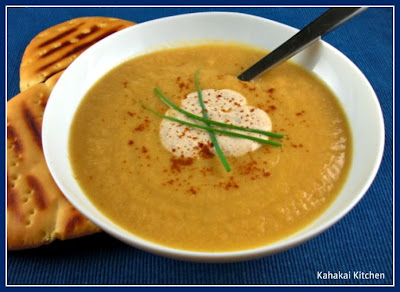 Recipes from spas and spa cookbooks are some of my favorites. Since they are designed for people who are paying to be pampered, they are usually both tasty and healthy--my favorite combination. This Cauliflower Soup with Tandori Yogurt from Canyon Ranch fits the bill in both of these areas. Cauliflower and other veggies and some spices are caramelized then simmered before being pureed into a thick creamy soup, then the soup is topped with a spiced yogurt for extra flavor. The fact that it uses vegetable puree and non-fat yogurt for the topping, keeps the calorie count remarkably low.
This recipe comes from The Canyon Ranch Healthy Living Club newsletter here. 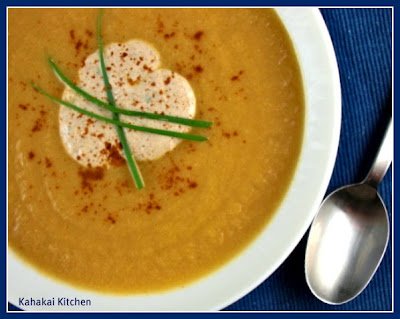 In a large saucepan, over medium heat, sauté cauliflower, onions, leeks, carrots and celery, Aleppo pepper (or paprika) and garlic in olive oil until caramelized, about 25 minutes. Increase heat to high, add water and bring to a boil. Reduce heat and simmer for 45 minutes. Season with salt and vinegar.
Cool slightly and transfer mixture into a blender container. Puree until very smooth. In a small bowl, combine all ingredients for Tandoori Yogurt and mix until smooth. 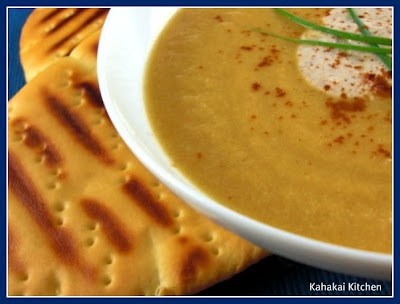 Cook's Note: This soup can easily be made vegan by omitting the Tandoori Yogurt. This will also lower the calories and change some of the nutritionals. 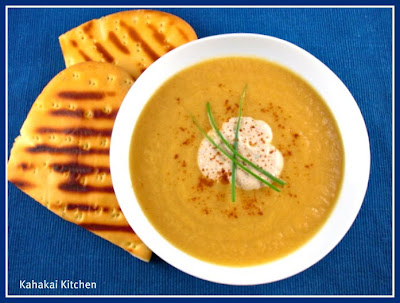 Notes/Results: Really delicious--so full of good flavor and really creamy for such a low-calorie soup. Caramelizing all of the vegetables adds a nice depth of flavor so the soup tastes rich. The tangy spiced yogurt is a good pairing with the creamy soup but it is actually quite delicious without it too. Served with grilled naan bread and a simple salad, it was a satisfying and healthy meat-free dinner. I would make this soup again.

It looks like a good-sized group in the Souper Sundays kitchen this week--let's see who is here!
First up, I am delighted to have Debbie from The Friday Friends back with us this week and with a hearty Albondiga (Meatball Soup). Debbie says, "The recipe comes from an old friend of mine, Letty Rodriguez. I assume that she learned from her mom, who learned from her mom in Mexico. It's really good. The only thing that I will do different next time is to brown the meatballs first, before adding them to the soup. I think the carmelization of the meatballs would be a great addition to this recipe, but the seasonings are wonderful." 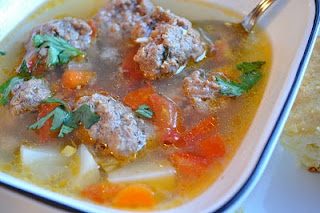 Lovely Graziana from Erbe in Cucina made a spicy, flavorful White Chicken Chili this week and says, "I wanted to prepare a chili white variant, with chicken and white beans. Of course I added also my white eggplants, tasty and delicate. I know, I should have used a white (or pale yellow) chili too, like the Banana Sweet, but I had harvested some unripe Jalapeno Mitla, and they added a touch of green (and of spiciness) to the chili." 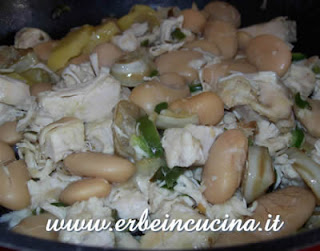 Kait from Pots and Plots was busy this week with two dishes to share. The first is this Pork Burrito Soup about which she says, "Reruns! It’s not often that I come up with something that so perfectly turns into something else. But last night’s pork burrito filling was so tasty and there wasn’t quite enough for two servings of exact reruns. So what else to do? Throw in a bunch of veggies and make a new variation of the Mexican themed soups we so love." 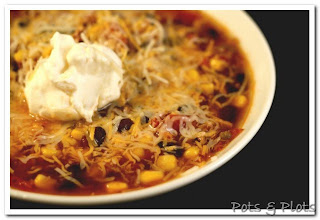 And if that wasn't enough, she also tried her hand at a White Chicken Chili and says, "I've been on a kick of trying new foods. I’ll pick up a new food and figure out what to do with it. This week’s new food was Anaheim chilis, which I learned were a mild chili and usually what those canned, chopped green chilis on the Mexican aisle consist of. I’ve been craving chili, though not the big heavy tomato based variety we love in winter. So I threw together this 2 serving batch in the crock pot." 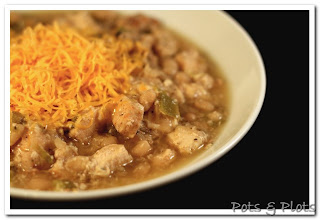 Heather of girlichef continues her quest for Tortilla Soup, this time changing the color. She says, "Green is good. Right? So why have I been shunning green for red? I swear it wasn't intentional. All my previous tortilla soups have been red...or orange, I suppose...if I'm being literal. But in a moment of sheer genius...a new front-runner was born! It was quick. It was green. It was caliente. It was the thing my dreams are made of." 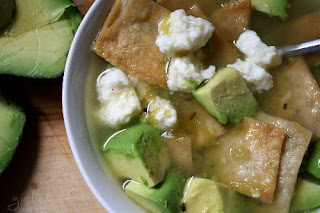 Lynde from Vinegarlic made an exotic soup; Sayadiya: Damiettan Fish Soup with Blackened Onions and says, "Throughout Egypt, Damietta is known for its intricately carved furniture, its marvelous sweets, and its Sayadiya. Whenever I have made the mistake of calling this an Egyptian dish, I’ve been quickly corrected that it is not merely Egyptian, it is Damiettan! The secret is in the onions. They must be cooked for a very long time, until they are chocolate brown and mostly black but are not burned. “Just keep stirring and they won’t burn,” Mama Samya says whenever I feel the urge to turn off the heat a little too soon. Those last shades of color are critical, and give this soup a flavor like no other." 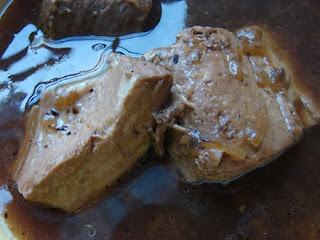 Foodycat is here this week with a Sweetcorn and Tomato Chowder and says, "I had been hoping that the maiden voyage of the corn zipper would be on some home-grown sweetcorn, but alas it was not to be. The plants sprouted quickly enough, and formed ears like good little plantlets, but then totally failed to form kernels. But all is not lost. Waving the flag for our gardening abilities, this soup does contain homegrown cherry tomatoes and chilli. And it takes less than 10 minutes to make, including going out and picking your tomatoes, which is nice. It is a real taste of late summer and absolutely delicious." 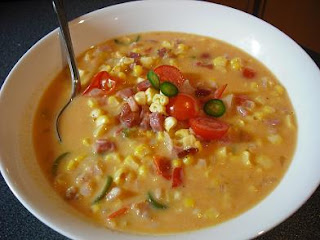 Sayantani from A Homemaker's Diary is back today with a Mushroom Soup with Chili Oil. She says, "...I was bowled over by the rich taste of this soup. It was creamy, it was flavourful and it was lip smackingly delicious. I loved it so much that I kept on preparing this again again and especially during winters when curling on a couch with hot bowl of soup seems almost like nirvana. Hubby equally loves this one and whenever he sees good button mushrooms in the market he brings home at least 2 packets and requests me to make this." 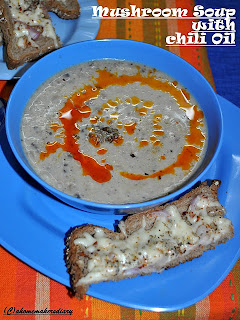 Tigerfish from Tezcape--An Escape to Taste has a salad to share this week, this Japchae (Korean Style Glass Noodles Salad) and says, "I like it when they serve Japchae (dangmyeon cellophane or glass noodles made from sweet potato starch) in Banchan (small dishes served along with main dishes or course) whenever I visit any Korean eateries or restaurants. I tried making it at home (my first attempt) recently and it turned out quite successful. I went the salad-route (instead of a stir-fry like some other recipes call for)." 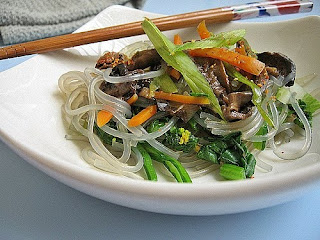 Janet from The Taste Space has been loving her carbs for her training, and made these healthy Ginger-Poached Soba Noodles with Broccoli and Tofu. Janet says, "Welcoming pasta back into the mix, including this Japanese-inspired noodle dish I found at 101 Cookbooks. It was a simple dish with subtle flavours. I thought the ginger would overpower the dish, but it blended seemlessly with the noodles and broccoli. The mint and basil worked well together with the chili flakes in this Japanese dish. If I was truly carb-loading, I would omit the tofu (72% carbs) but I think tofu adds a certain filling factor, so I kept it in."

Kim from Liv Life has a delicious Quinoa Black Bean Salad that is packed full of nutrients and says, "Quinoa Salad with Black Beans is a versatile recipe that works well with whatever vegetables you may have on hand, making it an easy last minute choice and transitioning seasons. With my treasure chest full of market veggies, the salad tossed together quickly, and easily provided a tasty and healthy side! (FYI... left overs make a perfect next day lunch!)" 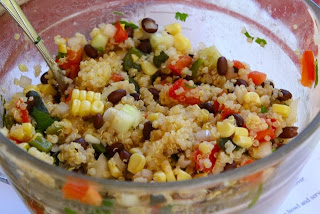 A new face to welcome this week is Megha from Live to Eat!!!, joining us from Mumbai, India and bringing along a Sweet Corn, Red Pepper, Gerkin & Green Olive Salad. Megha says, "As the name suggests, the ingredients are not tough to guess. It is simple and easy to make any time and anywhere.The entire combination of veggies is crunchy and refreshing. In India we have a wide range of spicy pickles and pickled gerkins are not in use in many households. The ones that I have used, are flavored with yellow mustard. You can use gerkins without any flavoring too..." Welcome Megha! 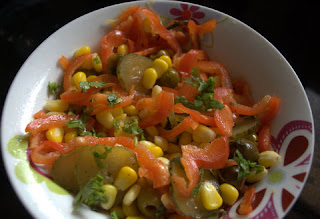 We are also welcoming Claire from Chez Cayenne, blogging from Houston Texas and making her first appearance here at Souper Sundays with her Simple Eggplant Sandwich. Claire says, "This eggplant sandwich is perfect when you're serving a soup or salad that is more than a side dish, but not quite a main on its own, so that you need something to round out the meal that's more than just bread. You don't have to keep this simple; you can add all kinds of things to it to take it up a level.The secrets to this are very good bread, fruity olive oil, and this steam-fry technique that results in tender, almost melty eggplant slices." So great to have you here Claire! 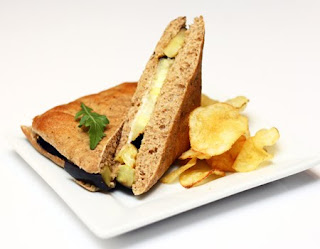 A great turn out this week--a little something for everyone! Thanks to all who joined in and a special thanks to our new faces. If you have a soup, salad or sandwich that you would like to share, just click on the Souper Sundays logo on the side bar for all of the details.
Have a wonderful week!