Since Whole Foods had fresh, local opah (moonfish) on sale, of course I had to buy some and decide what to do with it. Usually the opah that I buy ends up in fish tacos but I was craving something a little different and decided to throw together a pesto-style sauce that I have been tinkering around with in my head. I seem to have an excess of nuts and seeds stashed away in my freezer (maybe I was a squirrel in a previous life?) including two large containers of raw pumpkin seeds and needed a way to use some of them up. Combined with the last cup of a box of baby spinach, some cilantro and a couple of limes it became a healthy and tasty Spinach & Toasted Pumpkin Seed Pesto. The pesto can be used on fish, in a taco or burrito, with a grilled chicken breast, pasta or even used as a spread or dip. I served mine on top of a Mexican-spiced Opah over black beans and a multi-grain pilaf mix from Trader Joes. 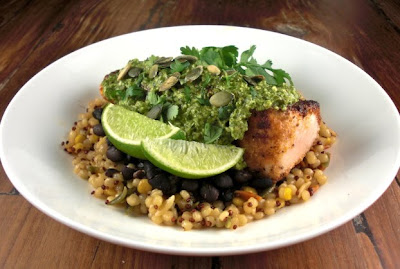 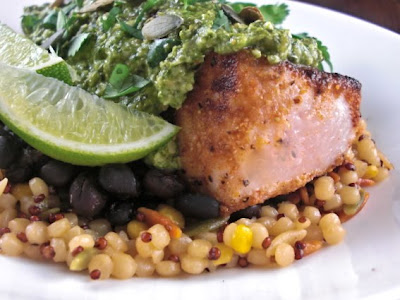 Notes/Results: Delicious. I like the brightness from the lime in the pesto combined with the toasty nuttiness of the pumpkin seeds. It went perfectly with the fish--which I lightly brushed with olive oil and dredged in a mix of cumin, coriander, garlic powder onion powder, cayenne pepper, salt and black pepper then cooked it on the stove on my grill pan. Combined with the canned beans and multi-grain pilaf it made a quick and easy meal with lots of protein and fiber. With magnesium, potassium, and other minerals in the pumpkin seeds and vitamins like K, C & A, magnesium, iron and other good things in the spinach, it made for a healthy dinner with a small green salad on the side. Of course since many of you may not have access to opah, it will work with any fish or lean protein as mentioned above. 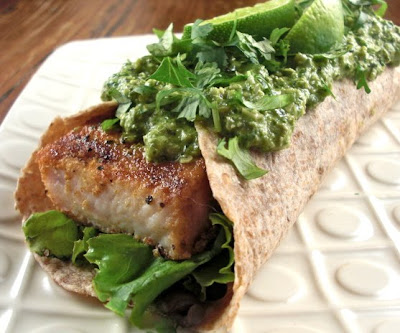 The next day the leftover fish, bean and pesto went into a sprouted-wheat tortilla for a good-for-me burrito. A keeper recipe, I will make the pesto again.