This month's second Barefoot Blogger's recipe, Meringues Chantilly was selected by BMK from Reservations Not Required. I was a bit nervous about this one, only because of the humidity level here in Hawaii. I made smaller meringues here once, and they had a bit of a "chew factor" to them so I had concerns about how the larger "nests" would turn out. It took me two attempts, (the details are in the Notes/Results below), but I got it; crispy meringue shells and a beautiful, elegant and tasty dessert. 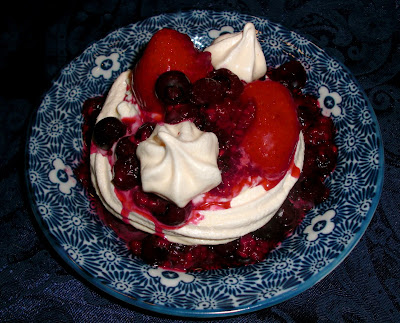 Preheat the oven to 200 degrees F. Line 2 baking sheets with parchment paper. Using a small glass and a pencil, draw 6 (3 1/2-inch) circles on each piece of paper. Turn the paper face-down on the baking sheets.

In the bowl of an electric mixer fitted with the whisk attachment, beat the egg whites, cream of tartar, and a large pinch of salt on medium speed until frothy. Add 1 cup of the sugar and raise the speed to high until the egg whites form very stiff peaks. Whisk in the vanilla. Carefully fold the remaining 1/2 cup of sugar into the meringue. With a large star - shaped pastry tip, pipe a disc of meringue inside each circle. Pipe another layer around the edge to form the sides of the shells.

Bake for 2 hours, or until the meringues are dry and crisp but not browned. Turn off the heat and allow the meringues to sit in the oven for 4 hours or overnight.

Spread some of the sauce from the stewed berries on each plate. Place a meringue on top and fill with whipped cream. Top with berries and serve.

-----
Whipped Cream with Orange Liqueur:
(Yields 4 cups)
2 cups (1 pint) cold heavy cream
2 tablespoons sugar
2 teaspoons pure vanilla extract
1 tablespoon orange liqueur
Whip the cream in the bowl of an electric mixer fitted with the whisk attachment. When it starts to thicken, add the sugar, vanilla and orange liqueur and continue to whip until the cream forms stiff peaks. Don't over beat, or you'll end up with butter!

------
Stewed Berries:
1 half-pint fresh blueberries
3 half-pints fresh raspberries, divided
1/4 cup water
1/4 cup sugar
1/4 teaspoon orange zest
2 teaspoons framboise (raspberry brandy)
Combine the blueberries, one-half pint of raspberries, 1/3 cup water, the sugar and zest in a saucepan and bring to a boil. Lower the heat and cook uncovered over medium-low heat, stirring occasionally, for 8 to 10 minutes. The juice will become a syrup and the berries will be slightly cooked. Off the heat, stir in the remaining raspberries and the framboise. Set aside.
Notes/Results: I was keeping an eye on the humidity level to determine a good time to make my meringues and it was running in the mid-50%s most of last week. Finally on Sunday, it got to the low-50%s so I decided to go for it. Unfortunately, I didn't realize until I went to add the sugar, that the only sugar I had on hand was organic, which if you have not used it, is not bleached like regular sugar. I went ahead and used it and hoped for the best but what I got was some nice "antique white" meringue shells and they had a bit more chewiness than I wanted. After a visit to the store the next day, I decided to try again, this time with regular white sugar. Monday the humidity was about 44% and the second time was the charm, this batch was pearly-white, nice and crisp. (I don't know if you can tell the true color difference in the photo below but the organic sugar one is on the right--it looked much more yellowed in person). As suggested, I left both batches in the oven overnight which seemed to help with the crispness. 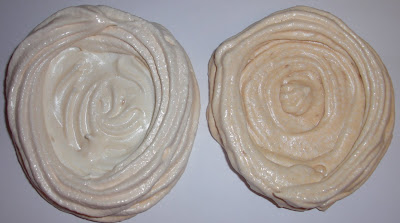 I didn't do much to make this recipe "healthier", again mainly portion control, making a half batch. I did lower the amount of sugar a bit in the berries. Fresh berries were expensive and looking not so fresh, so I used some organic berries (raspberries, blueberries and a few strawberries), I had in the freezer since they were going to be "stewed" anyway. I did use framboise in the syrup as I had it on hand but left out the orange liquor since I didn't want to buy it. I did grate some orange zest into the whipped cream, which gave it a nice flavor. I used the leftover meringue in my pastry bag to pipe some little stars for garnish. Although this recipe is a bit too "fussy" of a dessert for me to make regularly and I'd rather spend my "indulgence allowance" on good chocolate, it was tasty and fun to make. I liked the flavor of the berries (the extra will be going into a milkshake with some homemade frozen yogurt) and the different textures with the crisp meringues, combined with the soft whipped cream. 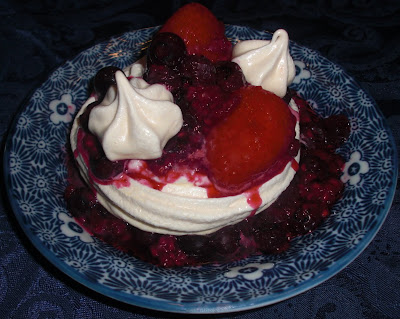 Thanks BMK for a great pick that helped me work on my meringue-making skills. You can check out what the other Barefoot Bloggers thought of this recipe at the BB site here.
Posted by Deb in Hawaii at 12:01 AM