So my choice for Tyler Florence Fridays this week will not win any beauty awards, but it is darn good. Since I had picked up some local Japanese eggplant from the Framer's Market last weekend, I selected the Baked Eggplant with Sesame Yogurt and Mint recipe from Tyler Florence's Real Kitchen (page 262). 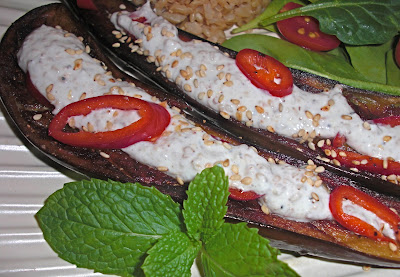 Tyler says:  "The eggplant is also great grilled. The yogurt sauce is my version of tahini."
Baked Eggplant with Sesame Yogurt and Mint
Tyler Florence's Real Kitchen
(Serves 4-6)
6 Japanese eggplants, halved lengthwise
extra-virgin olive oil
1 fresh red chile, thinly sliced on the diagonal
sea salt and freshly ground pepper
1/2 cup plain yogurt
1/4 cup sesame seeds, toasted. plus more for garnish (see note)
juice of 1/2 lemon
fresh mint for garnish
Preheat oven to 450 degrees F. Put the eggplant in a large shallow bowl and add the oil, chile, salt and pepper. Toss to coat. Arrange the eggplant on a sheet pan, cut side down, and bake for 40 minutes, until soft. While the eggplant is in the oven, make the yogurt sauce. 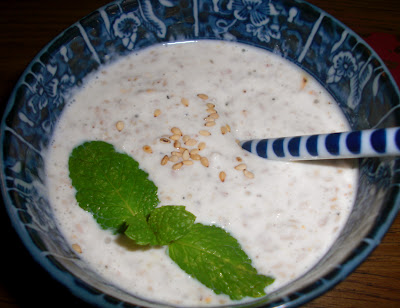 Combine the yogurt, sesame seed and lemon juice in a food processor or blender; doesn't matter. Blend until creamy and smooth. Season with salt and pepper. When the hot, gooey, sticky eggplant comes out of the oven, drizzle the yogurt sauce on top and garnish with more sesame seeds and some fresh mint. Nice Moroccan dish.
Note: To toast sesame seeds: Put the sesame seeds in a dry skillet. Place over medium-low heat and shake the pan constantly until the seeds are golden brown.
Notes/Results: I think my Japanese eggplants must have been much smaller than Tyler's. I thought that 40 minutes seemed like too long to cook them so I set the timer for 20 minutes to take a progress check, and they were slightly more than done at that point. They were not the lightly golden ones in the picture in the cookbook--in fact those look suspiciously like they never saw a baking sheet. None the less, they were still delicious, creamy inside, lightly spicy from the chili, and a little bit of heaven with the yummy sesame yogurt sauce. I will make this dish again, with slightly bigger eggplant, maybe in my grill pan and watching the time carefully. I served it with a simple salad, and since this dish had a Middle Eastern flair, I decided to make "Bud's Special Rice", from The Language of Baklava by Diana Abu-Jaber, (Our last Cook The Books pick), after seeing how much Arlene from The Food of Love enjoyed it. (Her post and the recipe are here). The rice, topped with pine nuts, cinnamon and pepper was delicious. (I did use brown basmati rice and I left out the butter, browning the pine nuts in just a bit of olive oil. Sorry Bud!). 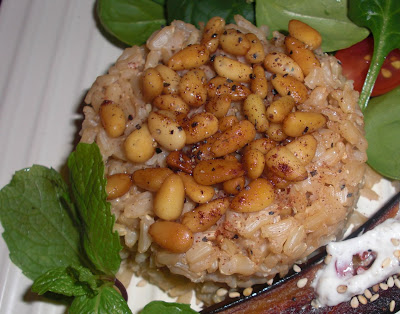 A really delicious dinner. I took some leftover eggplant and mashed it up and ate it on a multi-grain roll with some avocado, tomato, lettuce and the yogurt sauce for lunch the next day and that was great too. Another flavorful, delicious, Tyler recipe. 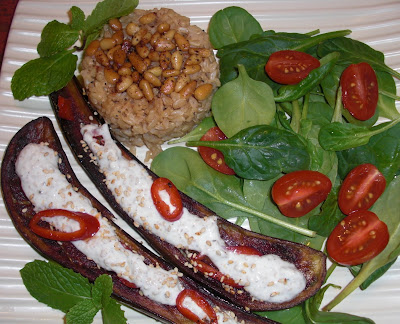 You can check out what the other TFF participants made this week and see their feedback at the TFF site here.
Happy Aloha Friday!  Have a great weekend!
Posted by Deb in Hawaii at 12:01 AM