I realized I haven't done a Weekend Cookbook Challenge since July. I'm not sure how that happened but when I saw that this month's theme was Appetizers, I decided it would be a good time to jump back in.  I love trying new appetizer recipes and adding to my "pupu repertoire".  I like appetizers that are easy, both look and taste great and any time I can work ahi or salmon in I do. (Both for the taste and how it looks on my blue and white dishes!) For this challenge, I have two simple but delicious appetizers, Tuna with Sesame Soy & Smoked Salmon Rolls from Very Simple Food by Jill Dupleix.  Jill is a chef from Australia, currently in London and I have several of her cookbooks. I like her easy, relaxed style of cooking. 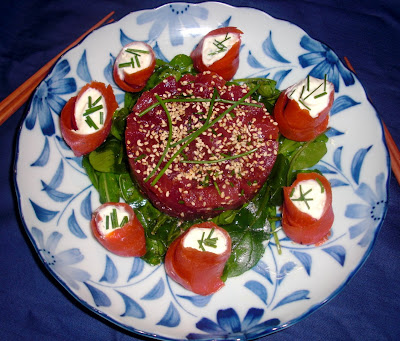 Tuna with Sesame Soy
Very Simple Food, Jill Dupleix
Serves 4
Jill says:  "Really fresh tuna has a pure, sweet flavor and melt in the mouth texture.  This no-cook, no-fuss first course makes the most of tuna by teaming it with soy sauce, sesame oil & mirin (sweet rice wine), available from Japanese food stores & helpful supermarkets."
12 oz fresh sashimi-quality tuna
1 Tbsp soy sauce
1 Tbsp mirin
1 tsp toasted sesame oil
1/2 tsp Dijon mustard
1 tsp rice vinegar
1 Tbsp olive oil
sea salt
freshly ground black pepper
1 cup watercress leaves
1 Tbsp minced chives
Trim the tuna of all bloodlines and cut into a neat shape to enable you to cut it into small dice, around 1/2 inch.  Discard any obvious sinews or icky bits. Whisk the soy sauce, mirin, sesame oil, and mustard together in a bowl.  Add the tuna and toss lightly to coast in the dressing.  Mix the rice vinegar and olive oil with sea salt and pepper in a second bowl. Add the watercress and toss in the dressing, then arrange on four serving plates.  Place the tuna in little pyramids on top of the leaves, and scatter with the chives.  Serve with chopsticks. 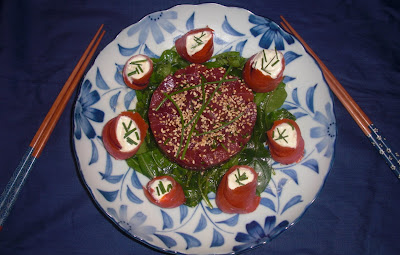 Smoked Salmon Rolls
Very Simple Food, Jill Dupleix
Makes 8
Jill says:  "These glamorous rolls fulfill my three main criteria for easy entertaining: they take only minutes to make; they can be done ahead of time; and they look like a million dollars. Serve as a sit down first course or with drinks."
2 Tbsp hot horseradish sauce
2 cups mascarpone or creme fraiche
2 Tbsp minced chives plus extra to serve
sea salt
freshly ground black pepper
8 oz thinly sliced smoked salmon
Beat 1 Tbsp horseradish into the mascarpone or creme fraiche. Gradually add the rest to taste, until the mixture is hot enough for you.  Add the chives, sea salt, and pepper and fold them through the cream.  (You can make this beforehand and refrigerate it.)  Trim the smoked salmon into 8 strips, each 2 x 6 inches.  Place a spoonful of the horseradish cream on one end of each strip and roll up.  It doesn't matter if the edges are a bit ragged.  Sit each smoked salmon roll on its end, and scatter extra chives on the exposed cream at the top. (You can even do this an hour or two beforehand and refrigerate until required).  Serve one or two salmon rolls per person. 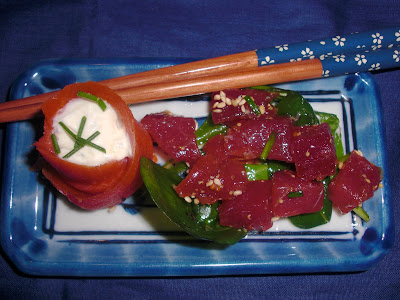 Notes/Results:  As promised by Jill, two easy and delicious pupus.  I changed a couple of things of course.  For the tuna, I plated it with my metal ring onto one dish and added some toasted sesame seeds to the top as garnish.  I liked all of the flavors in the dish, the peppery arugula was great with the ahi and the sauce was very good, as was the dressing for the arugula.  I would probably add some chili or chili oil next time for a bit of spice.  For the smoked salmon rolls, I decided to drain some low-fat Greek yogurt (to make a cream cheese textured yogurt cheese that would be a bit healthier than the mascarpone or creme fraiche). I was sure I had horseradish but I guess that was before I had the great fridge meltdown a couple months ago.  Instead of running to the store for some, I substituted some wasabi powder and mixed it in for a similar kick and more of an Asian flair to the dish.  The wasabi was delicious but I will try it again with the horseradish to compare.  Also the smoked salmon I had in my freezer is already sliced but cut a bit thick. It is delicious but I would try using a thinner salmon next time so the rolls hold together a little better. I would make both of these recipes again. 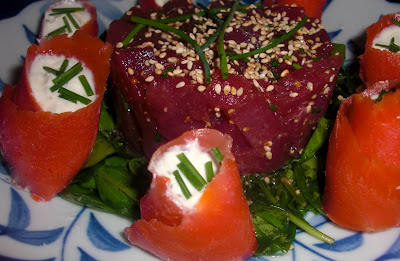 This month's Weekend Cookbook Challenge is being hosted by it's creator, Sara at i like to cook and you'll find the round up and I am sure some great appetizer recipes, there, on her site soon.
Posted by Deb in Hawaii at 9:30 AM