Many moons ago, when I lived in Portland, my roommate and I would go to Old Wives' Tales, a casual, funky, reasonably priced restaurant with a huge variety of options.  They have many vegetarian, gluten-free, dairy-free, etc. menu items and list out the ingredients so you know exactly what is in them. We went often to have their salad and soup bar for lunch, dinner and take out but we went mostly for their Hungarian Mushroom Soup, an impossibly pink and delicious blend of mushrooms and sour cream.  It wasn't a low-fat soup but it was so good that we treated ourselves often and it is so popular that it is always on their soup bar.  The other day I was thinking about it and started looking for a recipe on the web.  I found one from the restaurant itself on The Food Network (that makes enough for an actual restaurant to serve!) and also learned that the Old Wives' Tales soup recipe is based on the one from the Moosewood Cafe Cookbook. I ended up going with the Food Network recipe (drastically cutting it down of course). 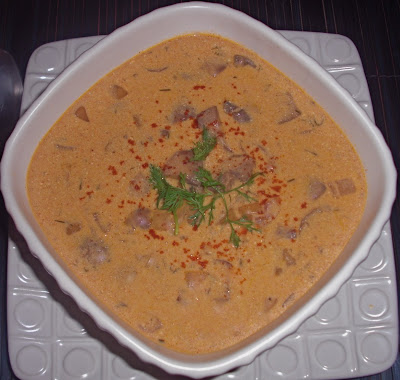 Melt butter. Add onions, and saute until wilted. Add mushrooms, saute until juice is rendered out.  Add dill, paprika, and mix well.  Add tamari, water, bring to a boil and reduce to a simmer.  In a large stockpot, make roux using butter and flour, cook 10 minutes. Drain some water from soup and beat into roux in stockpot until smooth. IMPORTANT- you will get flour lumps if you try to skip this step!  Add water-smoothed roux to kettle. Add milk and simmer until it thickens again, coating back of spoon. Turn off heat, beat in sour cream until well blended, then beat in salt and pepper. 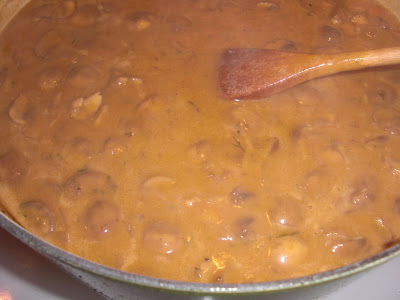 Notes/Results:  I cut this down to make 4-5 servings and used a low-fat sour cream, a lesser amount than the reduced recipe called for and also used 2% milk.  The flavor of the soup was delicious and very similar to what I remembered. I wasn't able to get it the really "pink" color that the one from Old Wives' Tales was, even adding a bit more paprika but it was still very good. The Moosewood recipe is slightly different so I am going to try that one at some point to compare. Even cutting down the fat in the milk and sour cream and using less sour cream in the recipe, it is not something I would make all the time but if you love mushrooms, creamy soups and of course paprika you will love this soup too. 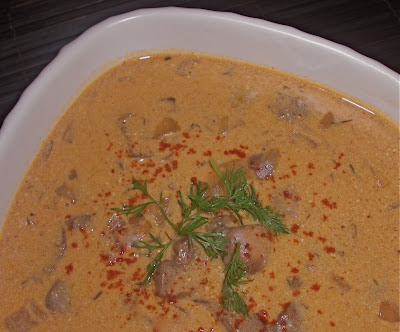 My usual partner in crime, Natashya, from Living In the Kitchen With Puppies, brought along a delicious Turkey Pot Pie with Onion-Sage Dressing to share.  Using up the last of her Christmas turkey, this pot pie looks like a great way to get a little holiday comfort.  Thanks for dropping by and sharing another great recipe Natashya! 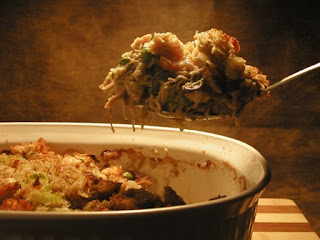 If you want to join in on a Souper Sunday, sharing a soup, stew, chili or any comfort food creation, leave a comment or send me an email by Sunday and I'll add you to that week's round up.
Posted by Deb in Hawaii at 11:30 AM