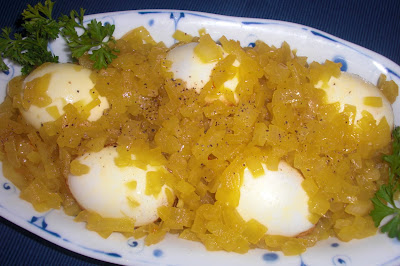 If you have not read about it yet, Cook The Books, is a book group that I helped start along with Rachel from the Crispy Cook and Johanna from Food Junkie, Not Junk Food. We will be reading a book every two months, cooking a dish inspired by it and posting it.

Our first book is La Cucina, A Novel of Rapture by Lily Prior. Set in Italy, specifically Sicily, it is the fanciful story of Rosa, the only girl in a large family. Spending most of her time in the kitchen, cooking is Rosa's passion, that and her first love Bartolomeo, who is killed by the local Mafiosi when she is 18. Rosa leaves her village and heads to the big city where she becomes a spinster librarian until in her 40's, she meets L'Inglese, who becomes her lover and brings her back to passion and to life. (I won't tell you anymore about the plot so you will just have to read the book!) The novel is full of many wacky, wonderful characters, incredible food and sex, more food, more sex--well you get the picture!
In coming up with a dish to represent the book, I struggled a bit. Rosa takes her cooking a bit more seriously than I do and I didn't want to knead bread all day, slaughter a pig or make homemade pasta. I finally decided to find an appropriate Sicilian recipe and to look to a cookbook that has been sitting on my shelf for awhile: In Nonna's Kitchen: Recipes and Traditions From Italy's Grandmothers by Carol Field. There are many recipes from Sicily and other regions in Italy in this book but the one that caught my eye was Uova Sode con Salsetta or Fried Hard-Boiled Eggs in a Saffron Onion Sauce. It sounded interesting and unusual and eggs are seen as a symbol of life and rebirth, which Rosa experiences in the novel.
The story for this recipe is that the grandmother behind it, Antonietta deBlasi, grew up in Sicily and spent her summers at a family house by the sea. During their two-months there, the men and children went to the beach every day while the women, who were not allowed to swim as it was thought that immersion in water would deplete their energy, (Hah! It was obviously a man who wanted a hot meal on the table that thought that one up!), stayed home and cooked lunch. It was also thought that only eggs could replenish energy lost in swimming so there were always many egg dishes on the menu. 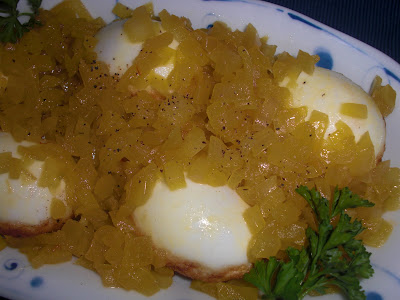 Uova Sode con Salsetta
(Fried Hard-Boiled Eggs in a Saffron Onion Sauce)
In Nonna's Kitchen, Carol Field
6 eggs
2 onions, finely diced
a large pinch of saffron threads or powder dissolved in 1/4 cup warm water
1/4 cup extra-virgin olive oil
about 1/4 cup all-purpose flour
salt
freshly ground black pepper
olive oil for frying
Bring a large pot of water to the boil, place the eggs in it , reduce the heat, and simmer them for 13 minutes. Immediately pour off the hot water and replace it with cold running water until the eggs are bathed in cold water. Set them aside to cool. You can wait to peel them until you are ready to proceed. 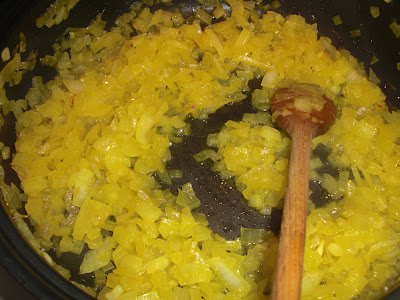 Place the onions in a medium saute' pan with the saffron dissolved in warm water. Add the olive oil and simmer over the lowest possible heat, adding as much as 1/3 cup of warm water to keep the onions moist. Cook until they are soft and limp and the sauce is lightly concentrated, about 30 minutes. The recipe can be made ahead to this point.
Pour the flour into a shallow bowl and season it with salt and pepper.  Heat 1 to 1 1/4 inches of oil in a medium-size saute' pan or deep fryer to 375 degrees F. It should sizzle when a pinch of flour is dropped into it. Peel each egg and then dip it in just enough flour to cover the lower half of the egg. 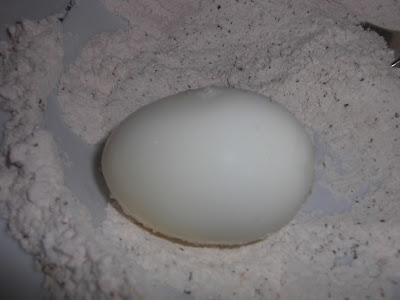 Place each egg in a slotted spoon and carefully lower it, floured side down, into the oil. Do not crowd the eggs. Fry until the bottom half is crisp and deeply golden while the top remains creamy white. Drain on paper towels. 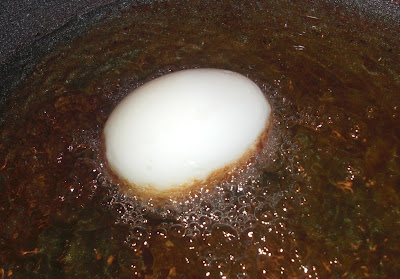 Serve the eggs hot with the sauce spooned over the top. (Serves 6) 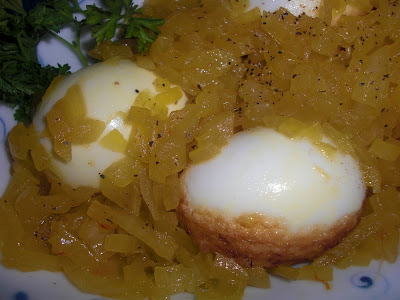 Notes/Results: To get in the mood, I put on one of my favorite Italian CDs: The Best of Paolo Conte (I dare you not to be in a good mood listening to Vieni Via Con Me!) This was a simple recipe to make, you just boil the eggs and let them cool while cooking down the onions in the saffron water until they are soft and saucy. Then when ready to serve, quickly fry up the eggs, after dipping the bottom halves in seasoned flour and top them with the saffron onion mixture. Deep frying the eggs gives them an interesting texture, the tops are your normal hard boiled egg, but the bottoms are crispy and have the chewy texture like the edges of fried egg white. The saffron onion sauce is a beautiful yellow hue, flavorful and delicious and compliments the eggs well. I did find myself adding a touch of salt to the sauce and sprinkling a bit of pepper over the dish to enhance the flavors further. An interesting dish that I am glad I tried. I don't know if I would necessarily make it again as written, but I might make the saffron onions again and serve them with fish or another protein. 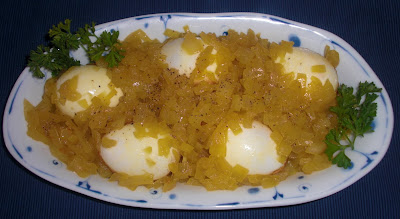 Recipes for this first round of Cook The Books don't have to be posted until December 15th so there is still plenty of time to join in the fun. (Remember, the blogger with the winning recipe that best represents the novel gets a cool badge for their blog!). 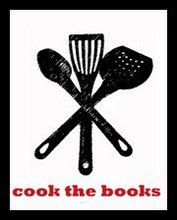 You can get all the details about this book group on the Cook The Books site here.  We will be announcing the next few books soon so if you can't make this one, plan on the next book.
Posted by Deb in Hawaii at 12:05 AM