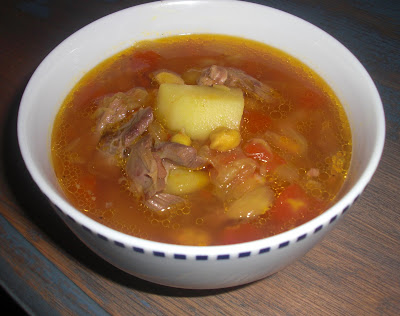 I was craving soup. Must have been seeing the Halloween decorations in the stores or the fact it rained twice yesterday (OK, only for about 5 minutes each time but it was still rain). As part of my "Cook From Each Book" initiative, I pulled out Persian Cooking: A Table of Exotic Delights by Nesta Ramazani where I had tagged a recipe for Ab-Goosht or Lamb Shank Soup. The book notes that there are three basic types of Persian or Iranian soups; meat-based (ab goosht), vegetable-based (ash) which can also contain meat, and finally a thin soup that resembles a French soup(soup). Ab-goosht is considered an everyday dish, economical, providing protein from the small amounts of meat (actually in this one, there is a good amount of meat) and the combinations of beans and also easy to stretch for visitors by adding extra water to the pot.
Ab-Goosht--Persian Lamb Shank Soup
Persian Cooking: A Table of Exotic Delights by Nesta Ramazani
Serves 6-8
-----
3 quarts water
2 lamb shanks
1/2 cup dried navy beans
1/2 cup dried chickpeas
1 can (15 oz) tomatoes
2 large onions, sliced
1 package dehydrated onion soup
2 tsps salt
2 tsps turmeric
1/4 tsp pepper
2-3 large potatoes
-----
Bring the water to a boil in a large pot. Add all the ingredients except the potatoes; lower the heat and simmer for 2 hours. Peel the potatoes, quarter, and add to the soup. Cover again and simmer 30 minutes longer, or until the potatoes are done. The book notes that "If desired, the meat, beans, chickpeas and potatoes may be removed from the soup, the meat boned; and all these ingredients mashed to a pulp, known as goosht-e koobideh (forcemeat). This may be served separately with hot bread". 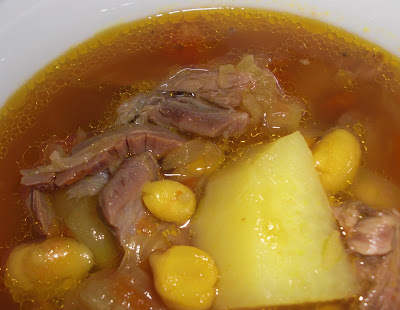 Results: A good, hearty soup with nice flavor from the turmeric and simmering the lamb shanks in the broth. I ended up cutting the potato in smaller pieces, rather than quartering them. I imagine if you are not a lamb fan, you could substitute beef, or leave out the meat entirely, increase the tomatoes and add some more veggies and make it a vegetable-based (ash) soup.
Posted by Deb in Hawaii at 4:04 PM