Happy Friday Eve! I am pleased to be today's stop on the TLC Book Tour for Cora's Kitchen by Kimberly Garret Brown, a historical fiction novella. Along with my review, I am including three mashed potato recipes inspired by my reading. (And OK a craving too!)

It is 1928 and Cora James, a 35-year-old Black librarian who works at the 135th Street library in Harlem, writes Langston Hughes a letter after identifying with one of his poems. She even reveals her secret desire to write. Langston responds, encouraging Cora to enter a writing contest sponsored by the National Urban League, and ignites her dream of being a writer. Cora is frustrated with the writing process, and her willingness to help her cousin Agnes keep her job after she is brutally beaten by her husband lands Cora in a white woman’s kitchen working as a cook.

In the Fitzgerald home, Cora discovers she has time to write and brings her notebook to work. When she comforts Mrs. Fitzgerald after an argument with Mr. Fitzgerald, a friendship forms. Mrs. Fitzgerald insists Cora call her Eleanor and gives her The Awakening by Kate Chopin to read. Cora is inspired by the conversation to write a story and sends it to Langston. Eventually she begins to question her life and marriage and starts to write another story about a woman’s sense of self. Through a series of letters, and startling developments in her dealings with the white family, Cora’s journey to becoming a writer takes her to the brink of losing everything, including her life.

“Through journal entries and letters, Cora invites us into not only her kitchen but also into her intense inner life, torn between her obligations as a wife, mother, and librarian and her urge to cook up her own stories. Though her friend Langston Hughes urges her to follow her passions, Cora’s commitment to write is challenged daily by life’s circumstances, only to find a surprising new source of encouragement. As 1928 unfolds, CORA’S KITCHEN delves deeply into what it means to be a Black woman with ambition, to make choices and keep secrets, and to have an unexpected alliance with a white woman that ultimately may save both of them. In this intimate and expansive novel, Kim Garrett Brown renders Cora with immense empathy, acknowledging and confronting Cora’s own prejudices and allegiances and the social pressures that continue to reverberate far beyond this story. Cora’s Kitchen is a poignant, compelling story in which misfortune and fortune cannot be teased apart and literature and life have everything to do with each other.”–Anna Leahy, author of What Happened Was

“It has been said, the universal is found in the specific, and in CORA’S KITCHEN all women will find their challenges and longings expressed in unflinching honesty. Kimberly Brown’s characters are faithful to a time, yet timeless, transcending the years to both painfully and beautifully illustrate the struggles women face to find and fulfill their vocations. Spellbinding.” –Erika Robuck, national bestselling author of The Invisible Woman 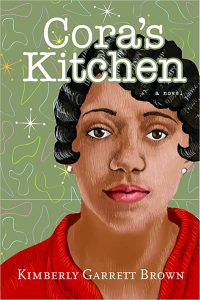 Cora's Kitchen is a epistolary novella, told the the main characters journal entries and letters to and from the poet and writer, Langston Hughes. I enjoy books that give me a look into a another person's life that is different from mine, and Cora James couldn't be more different. Cora is black, married to her musician husband, has two teenage children and is a librarian living in New York during the Harlem Renaissance. More than anything, she dreams of being a writer. At her library job, she befriends Hughes and strikes up a correspondence with him where he gives her advice and encourages her writing dreams. When Cora's cousin, Agnes, is severely beaten by her husband, her aunt asks Cora to take over Agnes' job as a cook for a wealthy white family so she won't lose it. This puts Cora in the orbit of Eleanor Fitzgerald and her family and she strikes up a relationship and friendship of sorts with Mrs. Fitzgerald. At least as much of a friendship as is possible between women of two races and unequal classes in the 1920s. Time in between cooking has Cora writing in her journal and crafting story ideas and getting an opportunity through Eleanor to leave her job and family responsibilities in the city and write for a few weeks in the summer.

Seeing life as a black woman through Cora's eyes during a golden age of African American culture was interesting. Due to her and her husband's jobs, she was in the orbit of many names of the day. In Addition to Langston Hughes, prominent figures like W.E.B. Du Bois and Zora Neale Hurston were mentioned and it made me want to learn more about the period and life in Harlem. Cora has some hard realities to face with her relationship with her husband, her teenage son hanging out with a bad crowd, and the domestic troubles of her cousin, so it is easy to sympathize with her as she struggles to achieve her dreams in a world and era not very accepting of women equality in general, and especially not women of color. Not only does she struggle to be a writer, Langston Hughes chides her to be responsible to the Black community and be their voice--"the voice for a people who have been silenced for centuries." That's a lot of pressure. Although a quick read due to pages and style, Cora's Kitchen is a thought-provoking book, beautifully written and engaging. I would love to read more about Cora's journey and will keep my eye out for more from this author.

Food is not a huge focus of Cora's Kitchen, but it is mentioned in the meals Cora makes for her own family and the Fitzgeralds. Mentions included the basics like roasted meat/pot roast and potato dinners, chocolate cake, sandwiches, peach pie, and ice cream.

At one point, one of the characters mentions that Cora's cousin makes better mashed potatoes and Cora knows that her own mashed potatoes are smoother and better. I thought the rivalry in cooking was fun so with a nod to that mention and a craving for good mashed potatoes, here a three favorite recipes: 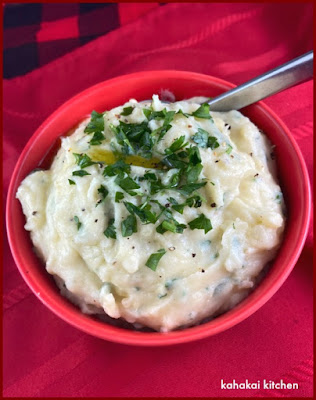 Tessa Kiros's Sage and Rosemary Mashed Potatoes: these stand on their own but would be perfect for thanksgiving. 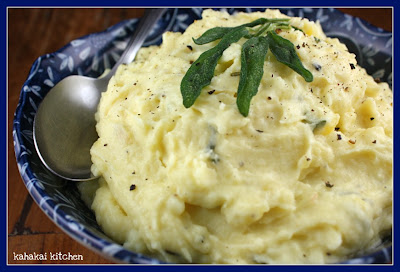 Looking for something a bit healthier? Herb and Olive Oil Mashed Potatoes from The Mediterranean Diabetes Cookbook by Amy Riolo are delicious and feel decadent. 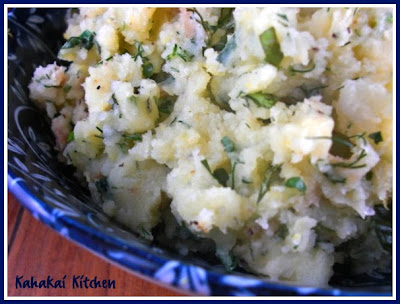 I may have to break down and make some soon!

Note: A review copy of "Cora's Kitchen" was provided to me by the author and the publisher via TLC Book Tours. I was not compensated for this review and as always, my thoughts and opinions are my own.