The Book Tour Stops Here: A Review of The Killing Kind by Jane Casey, Served with Mushroom Spinach Pizza & a Recipe for Garlic Cream Sauce

Happy Aloha Friday! It's officially Fall and this season is always a good time for a twisty psychological thriller, so I am happy to be today's stop on the TLC Book Tour for The Killing Kind by Jane Casey. Accompanying my review is a tasty Mushroom Garlic Pizza and a recipe for a Garlic Cream Sauce to use on pizza or pasta. 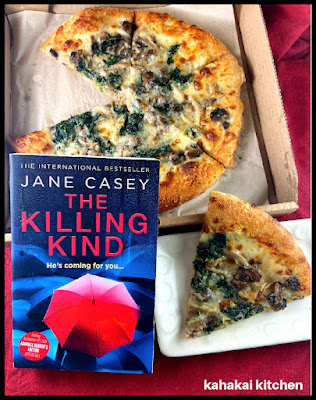 He tells you you’re special…As a barrister, Ingrid Lewis is used to dealing with tricky clients, but no one has ever come close to John Webster. After Ingrid defended Webster against a stalking charge, he then turned on her – following her, ruining her relationship, even destroying her home.

He tells you he wants to protect you…Now, Ingrid believes she has finally escaped his clutches. But when one of her colleagues is run down on a busy London road, Ingrid is sure she was the intended victim. And then Webster shows up at her door…

But can you believe him?Webster claims Ingrid is in danger – and that only he can protect her. Stalker or saviour? Murderer or protector? The clock is ticking for Ingrid to decide. Because the killer is ready to strike again. 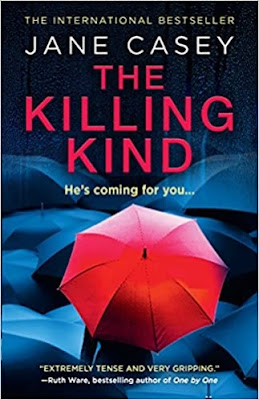 Publisher: Harper Collins (September 21, 2021)
Hardcover: 480 pages
My Review:
As mentioned above, I love a good dark thriller with plenty of twists and The Killing Kind is definitely that. It follows Ingrid, a 30-something barrister in London, who has seemingly good reason to believe that the death of a colleague crossing a busy street may actually not have been an accident and that she might have been the intended victim. That this happens after a former client, John Webster, who stalked her, burnt down her flat and ruined her relationship with her fiance (and is generally a charismatic sociopath) is released from prison certainly gives her reason to fear for her life. I don't want to go into a lot of the details of the plot (because of potential spoilers) but soon Webster is back in her life and claiming that she needs him to help her figure out who is really behind the threat.
So many twists and turns and side characters and plots--a bit chaotic but it kept me going for the almost 500 pages and made them fly by. At time things got a little fantastical, and I had to yell at Ingrid a lot in my head--for a seemingly smart person most of the time, she made some very questionable choices in terms of who she listened to and to whom she granted trust. There is a lot of British law jargon--I am more familiar with British police procedurals but not as much with the court system. (I found it interesting though.) John Webster was a fascinating character, one of those psychos who you just can't wait to see what they do next. I did guess the major twist in the book, but there were enough surprises left to make it intriguing and keep my interest.This is my first book from this author but after reading it, I am now inclined to give her two series (Maeve Kerrigan and Jess Tennant) a try. If you like dark and a little crazy, you will likely enjoy it too.
-----
One quote that I really liked from John Webster about how predictable people (especially  Ingrid) are in the choices and decisions we make:
"You think you're making free choices but really the decisions you make are about what you know, and what you find comforting."
----- 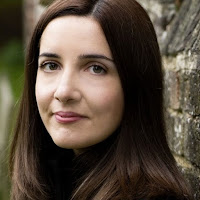 Author Notes: JANE CASEY is the author of the Maeve Kerrigan novels (Let the Dead Speak, After the Fire) and the Jess Tennant Mysteries (Hide and Seek, Bet Your Life). A graduate of Oxford she also has received a M. Phil from Trinity College, Dublin. Born and raised in Dublin, she lives in London where she works as an editor.
Find out more about Jane on her Twitter and Facebook.
-----
Food Inspiration:
There was food to be found in The Killing Kind. Sadly, much of it was tied to people's murders, but there was food. ;-) Mentions included a bowl of cereal, brunch with bottomless mimosas, buying "something strange and exotic to cook for dinner," herbs, "sickly sweet cocktails," lamb ragu with pappardelle, tinned chopped tomatoes, brittle pizza loaded with mozzarella, wine, vegetarian food. steak, rainbow-tinted macarons, almond croissant, kebabs, Diet Coke, goat's cheese and cranberry roulade, scallops, beans on toast, tea and a "vast oozing cream bun", a massive burger, ice cream, snacks and vegetable stir-fry. 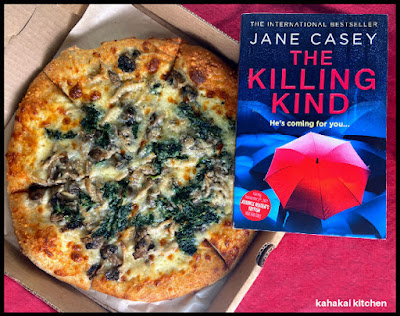 For my bookish dish, I was thinking about making a vegetarian ragu with pappardelle or beans on toast but as per usual lately, work and weeknights have me heading home in a tired daze. I was craving pizza and a local neighborhood cafe does pizza from 3:00 PM to Close and I have been wanting to try it out so I ordered one to go. In the book it was "brittle pizza loaded with mozzarella" and I took that to be a thin crust margherita-style pizza which was on the menu however, it was the SMG that I wanted with "Roasted Garlic Cream, Button and Oyster Mushrooms, Spinach, Shredded Mozzarella and Parmesan."
The crust is on the thinner side but soft and chewy rather than "brittle" and it was delcious as was the garlic cream sauce and mushrooms. This pizza made me happy for a week night dinner and the second half will be dinner tonight! 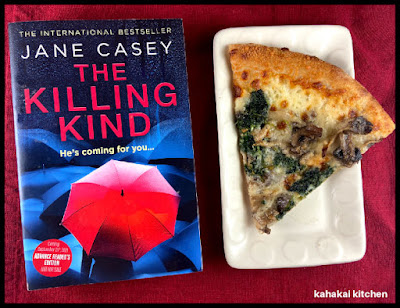 Since I usually post a recipe, I thought I would give you one for a Garlic Cream Sauce, similar to the one on my cafe pizza. Truth be told, I prefer a white sauce or pesto to tomato sauce on pizza. This sauce is similar to an Alfredo and works equally well on pasta.
Garlic Cream Sauce for Pizza or Pasta
By Deb, Kahakai Kitchen
(Makes about 1 1/4 cups)
2 Tbsp olive oil
4-5 cloves garlic, minced
1/4 tsp dried oregano
1/4 tsp dried basil
1/4 tsp dried thyme
freshly ground black pepper and salt to taste
2 Tbsp all purpose flour
1 1/2 cups cream or half-and-half (or coconut cream)
In a large skillet or pan, heat the oil over medium-high heat. Add garlic and cook for 3-4 minutes until fragrant and slightly softened. (Make sure not to burn it.) Add the flour and oregano, basil and thyme and whisk well, cooking a minute or two until flour starts to turn color. Stir in the cream, whisking constantly. Cook, about 4-5 minutes, stirring constantly until sauce is thick and bubbling.   Let cool slightly and spread on pizza before adding your toppings and baking, or thin it with a little more cream or pasta cooking water and use with your favorite sturdy pasta. 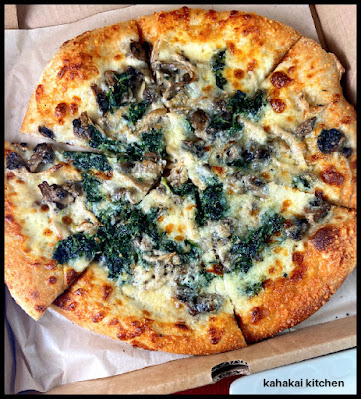 Notes/Results: Sure tomato sauce is healthier and less calories but when you want to indulge, a creamy, garlicky white pizza sauce is the way to go. This one is easy to make and tastes great. As for the pizza, I will definitely be ordering it again--yum! 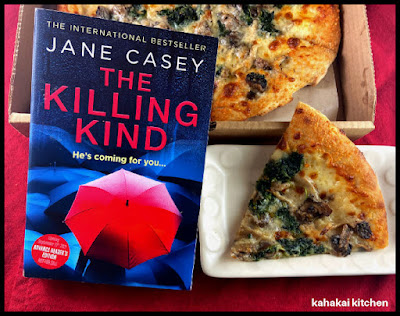 Note: A review copy of The Killing Kind was provided to me by the author and the publisher via TLC Book Tours. I was not compensated for this review and as always, my thoughts and opinions are my own.