2020 has not been a year full of bright spots for most of us. In fact, I know very few people that aren't just ready for it to be over with. So when The Book Club Cookbook contacted me and asked if I'd like to close the year taking part in their 2020 virtual #BlendsBash I was all in! From September into mid-December I'll be sharing some original recipes made with their wonderful spice blends, al cleverly and punnily named for books, television shows and songs.

First up for me, some fun and fabulous Dukkah Earl Grilled Eggplant Toasts Topped with Whipped Feta & Dukkah. 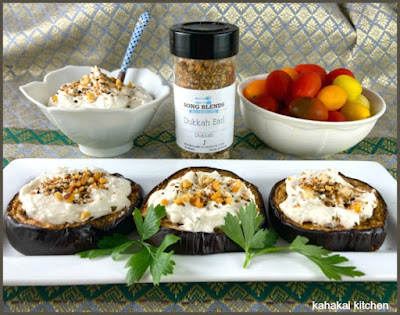 Duke of Earl" is a 1962 US number-one song, originally by Gene Chandler. It is the best known of Chandler's songs, and he subsequently dubbed himself "The Duke of Earl". The song was penned by Chandler, Bernice Williams, and Earl Edwards. This song was a 2002 inductee into the Grammy Hall of Fame and is not too hard to learn the words too! 😉

Dukkah is a Egyptian and Middle Eastern condiment made up of a mixture of herbs, nuts (usually hazelnuts) and spices. It is typically used as a dip with bread or vegetables as an appetizer or pupu as we call them here. I had a small kine addiction to Trader Joe's Dukkah Blend a few years ago and then they stopped making it for a while. I tried making my own but I confess, the urge to have someone blend and pound the mixture for me usually wins out.

When I saw that my friends at The Book Club Cookbook added Dukkah to their Song Blends line-up, cleverly calling it Dukkah Earl, I knew I had to add it to my list of spice blends for the Blends Bash party they are hosting. 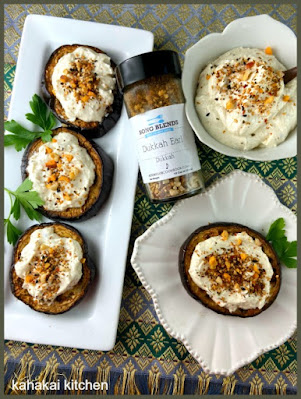 Dukkah Earl contains hazelnuts, sesame, coriander, cumin, black pepper, sumac, sea salt, nigella seeds, Aleppo, spearmint. I wanted to do something fun with it and I had seen a few articles online about eggplant toasts--a lower carb, bread-free toast option and had been wanting to try them. I decided to do a version with whipped dukkah feta and a sprinkling of Dukkah Earl on top for the crunch factor. You could of coarse smear the whipped feta on actual bread or pita bread, but I think the eggplant toasts are fun! 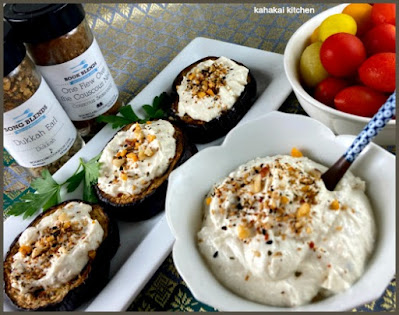 Preheat your oven to 400 degrees F. Line a baking pan with parchment paper. Brush the slices in olive oil and sprinkle on the spice blend and sea salt and pepper.

Pace the eggplant slices on the paper lined baking sheet. Roast for around 20-25 minutes or until the eggplant appears soft and slightly browned. Allow to cool slightly before spreading the whipped feta topping on. Top with a sprinkle of the Dukkah Earl and enjoy! 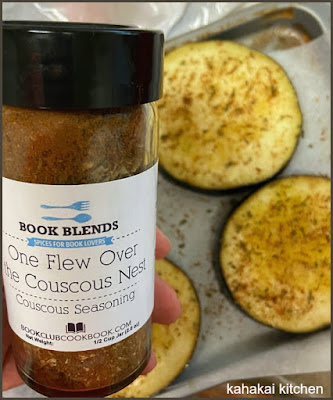 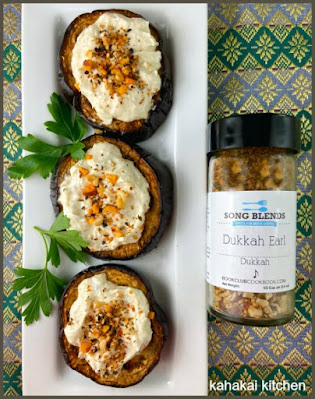 Notes/Results: These were really tasty and really fun to eat! I liked the mix of all of the Middle Eastern spices with the eggplant, feta and lemon juice. The flavor of the dukkah comes through and the crunch of the herb mixture on top is a nice contrast. This is an excellent dukkah--fresh and just the right coarseness. The one thing I would change is trying to pan fry my eggplant toasts next time. They were soft and delicious but when I think of toast, I want more crisp crunch. Still, I ate them all happily--they were like nice soft bread. My eggplant was not particularly large and so I thought three toasts with the whipped feta was a good amount of breakfast or lunch. They would be really fun for one-bite appetizers if you used a small eggplant too. While there are a few steps to making these, they are very easy to make and I will definitely be making them again. 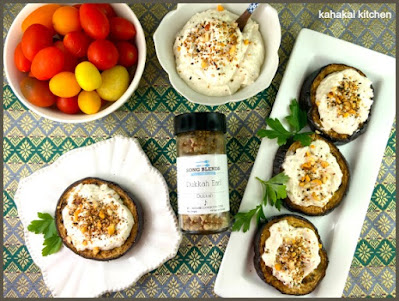 Many thanks to The Book Club Cookbook for providing me with this tasty seasoning blend. I received no compensation for taking part in the virtual 2020 #BlendsBash party and my thoughts and experience using the blends are my own.

I'll be sharing more recipes between now and December as will more than 30 other bloggers as part of the 2020 Blends Bash!  You can check out all the bloggers participating in the #BlendsBash here 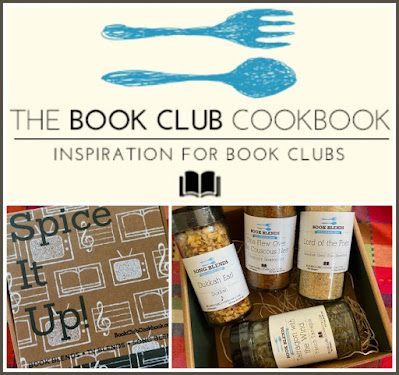 Here's a sneak peek at the other blends I'll be featuring over the next couple of months in their adorable packaging. These blends are so delicious and fun that they will make wonderful gifts for your foodie friends and fans of the many book, TV and song blends they feature. Check out a list of blends here.