The Book Tour Stops Here: A Review of "Before She Was Found" by Heather Gudenkauf, Served with a Recipe for Cheese Pizza (with Pesto, Artichoke Hearts & Black Olives)

One more day until Friday! I am excited for the weekend and excited to be today's stop on the TLC Book Tour for Before She Was Found, a new mystery/thriller by Heather Gudenkauf. Accompanying my review is a recipe for an easy Cheese Pizza. While the dish is inspired by my reading, I changed up to experiment with a keto-friendly egg and cheese crust and topped it with pesto, artichoke hearts, black olives and plenty of cheese. 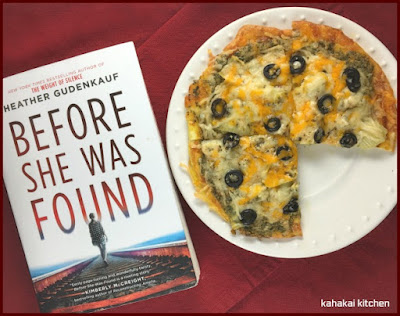 A gripping thriller about three young girlfriends, a dark obsession and a chilling crime that shakes up a quiet Iowa town.

For twelve-year-old Cora Landry and her friends Violet and Jordyn, it was supposed to be an ordinary sleepover—movies and Ouija and talking about boys. But when they decide to sneak out to go to the abandoned rail yard on the outskirts of town, little do they know that their innocent games will have dangerous consequences.

Later that night, Cora Landry is discovered on the tracks, bloody and clinging to life, her friends nowhere to be found. Soon their small rural town is thrust into a maelstrom. Who would want to hurt a young girl like Cora—and why? In an investigation that leaves no stone unturned, everyone is a suspect and no one can be trusted—not even those closest to Cora.

Before She Was Found is a timely and gripping thriller about friendship and betrayal, about the power of social pressure and the price of needing to fit in. It is about the great lengths a parent will go to protect their child and keep them safe—even if that means burying the truth, no matter the cost. 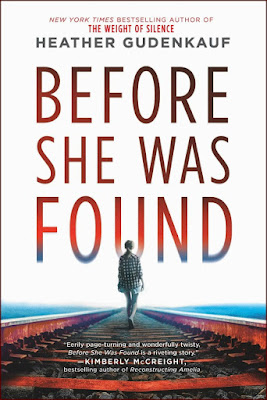 Before She Was Found is my first Heather Gudenkauf book and one reason I jumped on this tour as I have been meaning to give her a try. The other thing that drew me in was the similarity of the plot description to the Slender Man case from a few years ago in which two 12-year-old girls in Wisconsin, lured another friend to the woods and stabbed her in order to impress a creepy Internet urban legend. Gudenkauf notes in the afterword that this is where the inspiration from the book came from, although there are differences in characters, settings and plot lines. I won't go into much detail in this review as I don't want to spoil it.

The story is told from different points of view and methods--a therapist's notes, Cora's journal, texts between friends, etc., and goes back in forth from the night Cora is found on the train tracks of the abandoned rail yard having been attacked to the time before she was found. Gudenkauf does a skillful job in weaving the different perspectives together and building the suspense, with several twists and turns. There are a lot of characters--the three friends, Cora, Violet and Jordyn, their families, the doctors and police involved, other friends and a somewhat creepy teacher, which kept me interested and guessing as to what happened and who was involved. The down side is that it also made it hard to get to know or bond with any one character and I wanted to understand some of the different motives more than I did. Still, overall I enjoyed Before She Was Found; the story engaged me, the pages flew by, and I would definitely read more from this author.

Author Notes: Heather Gudenkauf is a New York Times and USA Today bestselling author of The Weight of Silence and Not a Sound.  Heather lives in Iowa with her family.

The food in Before She Was Found was a bit limited, but there were mentions like gingerbread and pitchie moloko ("birds milk cake" from Russia), ice cream, green rivers (a classic soda shop/diner drink of 7-Up and lime syrup), pizza, a turtle sundae, hot chocolate and fries, oatmeal, chocolate or strawberry milkshakes, peanut butter sandwich, butterscotch candy, bagels, donuts and orange juice, cupcakes, toast with butter and peach jam, pasta and wine, and a bunch of drinks and cocktails as one of the characters grandfather ran a bar and remembered people's drinks rather than their names.

For my bookish dish, I chose cheese pizza as when Cora and Violet first become friends, one of the things Cora notes they have in common is a love of cheese pizza. 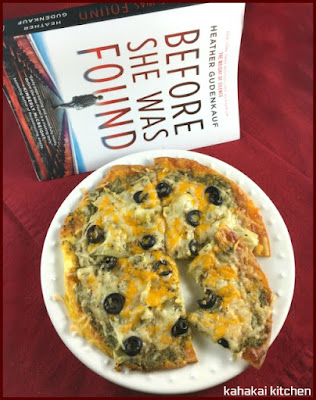 Why not a regular cheese pizza like the ones the girls enjoyed in the book? well, I have been wanting to experiment with a gluten-free crust and wanted something very easy for a weeknight dinner. my friend has been experimenting with a keto lifestyle lately and suggested I try this one from DietDoctor.com. I like the simplicity of it--just eggs and cheese in the crust (plus a little pepper I added). I prefer non-tomato sauces and have been craving pesto and I thought that the brine of the artichoke hearts and olives to cut some of the rich cheesy-ness. 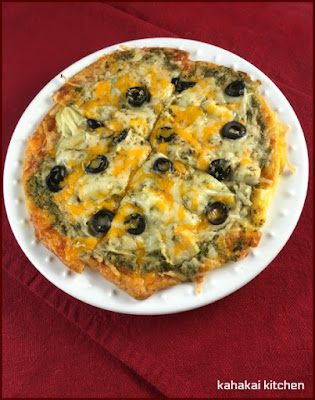 Toppings:
pesto or pizza sauce of choice
shredded cheese of choice (I used a mix of Parmesan, Romano, and cheddar)
canned or jarred artichoke hearts, drained and quartered
black olives
dried basil or oregano if desired

Pre-heat over to 400 degrees F. Prepare a baking sheet or pizza pan with parchment paper or olive oil cooking spray.

Crack the eggs into a medium bowl and stir them with a fork until blended. Stir in the shredded cheese and mix together well.

Spread out thinly on your prepared pan, using a rubber spatula. (Note: I used two personal pizza pans and divided the mix between them.)

Bake for about 15 minutes--until crust turns golden. Remove and let sit for a few minutes. (After it cools a little, I like to loosen the crust from a pan with my spatula before putting on the toppings.)

Turn oven to 450 degrees F. Spread pesto or sauce over pizza crust. Top with artichoke hearts, cheese and black olives--or toppings of choice. Sprinkle with a little dried oregano or basil if desired.

Bake for 7 -10 minutes or until cheese is melted and top is golden brown. 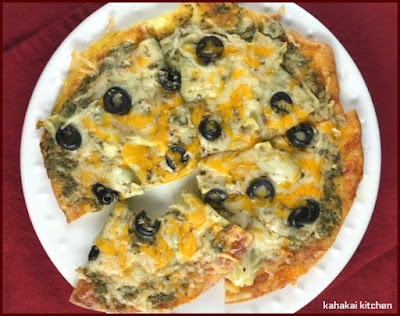 Notes/Results: Like a cross between pizza and frittata, but chewy and good and enough to solve my  pizza craving, I liked this pizza. It is rich though and I topped one of my two crusts and found myself only eating half of it. (The other half became today's breakfast and I saved the other crust to make another time.) If you don't want to bother with making crust, or frozen crust or pulverizing cauliflower rice if you want to go gluten-free, it is a good way to go and very easy. I will make  it again. 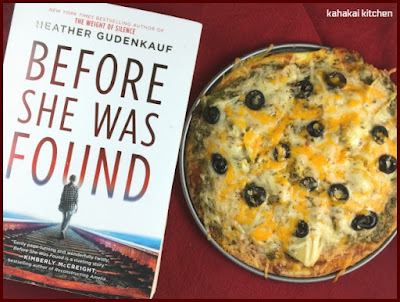 Note: A review copy of "Before She Was Gone" was provided to me by the author and the publisher via TLC Book Tours. I was not compensated for this review and as always, my thoughts and opinions are my own.