The Book Tour Stops Here: A Review of "The Spite Game" by Anna Snoekstra, Served with a Recipe for Fish-and-Chips with Caper Mayo

Happy Friday! I know many people go shopping on the Friday after Thanksgiving, but I never venture out to the stores on that day and this year, I spent my Black Friday at work. I would have rather been hiding out, curled up at home with a book so I bring you the next best thing, a review of The Spite Game, a new psychological thriller by Anna Snoekstra for TLC Book Tours. Accompanying my book tour review is a simple and delicious Fish and Chips with Caper Mayo, inspired by my reading. 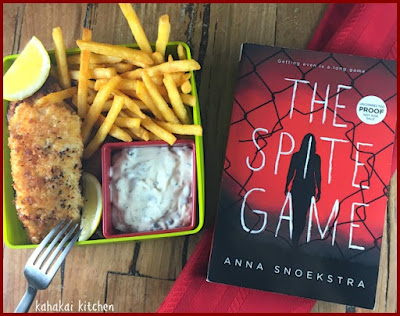 Everyone does bad things when no one is watching
Mercilessly bullied in high school, Ava knows she needs to put the past behind her and move on, but she can’t—not until she’s exacted precise, catastrophic revenge on the people who hurt her the most.

First, she watches Saanvi. Flawlessly chic and working hard at a top architectural firm, Saanvi has it all together on the surface. But everyone does bad things when they think no one is watching and Ava only wants what’s fair—to destroy Saanvi’s life the way her own was destroyed.

Finally, Ava watches Mel. Mel was always the ringleader and if anyone has to pay, it’s her. But one tiny slipup and Ava realizes the truth: Mel knows she’s being watched, and she’s ready to play Ava’s games to the bitter end. 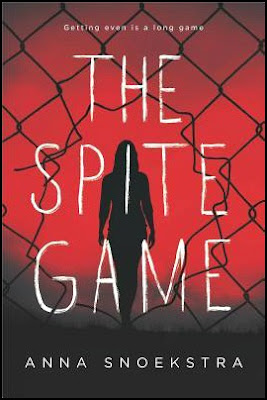 I like the premise of The Spite Game--a girl bullied in high school who years later, seeks revenge on the "friends" who betrayed her. I also read the author's Only Daughter a couple of years ago and enjoyed it. Overall, Anna Snoekstra delivers an absorbing and suspenseful story as Ava thinks back on what happened in high school and after graduation, while waiting in the local police station to confess her role in the disappearance of the former head of a Mean Girls-like high school clique. I did find the story a bit disjointed at times with the intersecting past and present timelines and relying on Ava's perspective and memories, as well as some events that were mentioned but not fully explored. Ava is a complex character--sympathetic but not all together likable, she considers herself to be broken and wonders if the "psycho" taunt of her classmates is perhaps accurate. The Australia setting is interesting--with the exception of some of the language and small details, it could be set in the U.S. and it's somewhat depressing to realize that bullying and high school torment looks the same on the other side of the world. I don't want to give too much away in terms of the twists and turns the story takes, but it had me anxious to see how it all played out. I will read more from this author.

Author Notes: Anna Snoekstra was born in Canberra, Australia to two civil servants. At the age of seventeen she decided to avoid a full time job and a steady wage to move to Melbourne and become a writer. She studied Creative Writing and Cinema at The University of Melbourne, followed by Screenwriting at RMIT University.

After finishing university, Anna wrote for independent films and fringe theatre, and directed music videos. During this time, she worked as a Christmas elf, cheesemonger, a waitress, a barista, a nanny, a receptionist, a cinema attendant and a film reviewer. 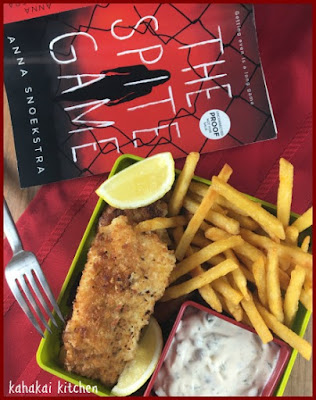 Ultimately it was the memory of takeaway fish and chips that Ava has when she and her sister are exploring a local shopping center that gave me my book-inspired dish. They talk about having fish and chips every Sunday night and how much they miss it and those times.

"I remembered sitting in the car, the box wrapped in white paper on my knees. After a while it would burn my thighs, but I didn't mind. That was a part of it. We'd park the car outside our house and I'd hand the box over to my mum, carefully, like there was a small animal asleep inside. There would be a pink rectangle left on my legs, still warm to the touch, and it would take a full ten minutes to fade away. When we opened the box it was like pulling the wrapping off a present. We'd sit in front of the TV and eat and no one would even be thinking of the week to come." 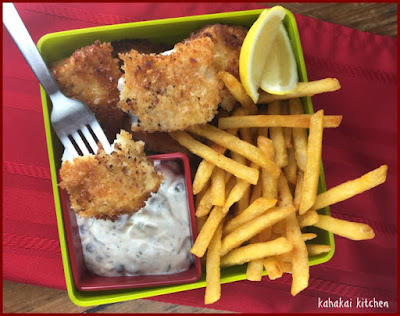 Since the book is set in Australia, I picked a fish and chip recipe from Australian chef and restaurateur Bill Granger and accompanied the fish with Ore-Ida's "Fast Food-Style" French Fries and a tarter-sauce-style Caper Mayo. I didn't have a proper paper takeaway box so I used a square lunch container to capture a similar vibe.

Dip each piece of fish in the flour, then the egg, then in the breadcrumbs.

Heat the olive oil and butter in a large non-stick frying pan over medium-high heat. Cook the fish strips, in batches, for about 2 minutes on each side until lightly golden, adding a little more butter and oil to the pan if needed.

Mix all ingredients together thoroughly. 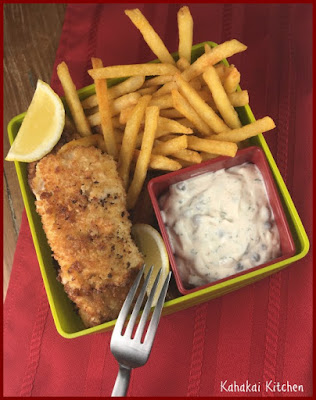 Notes/Results: There's just something about fish and chips, not exactly healthy but nostalgic and so good. I liked the hint of cumin and paprika (I used smoked paprika) in these. The panko adds such a nice crispy crust that houses the moist and flaky fish inside. A friend told me that she always adds vinegar to her tarter sauce and I really liked it here in the caper mayonnaise. Homemade fried would be better, but sometimes you just need the speedy store-bought kind. A tasty dinner, I would happily make it again. 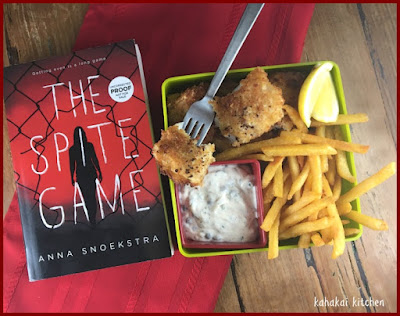 Note: A review copy of "The Spite Game" was provided to me by the author and the publisher via TLC Book Tours. I was not compensated for this review and as always, my thoughts and opinions are my own. You can see the stops for the rest of this TLC Book Tour and what other reviewers thought about the book here.