The Book Tour Stops Here: A Review of "Hiddensee" by Gregory Maguire, Served with a Recipe for Mulled Hard Cider (Glühmost) and Pear Toast with Pomegranate & Toasted Walnuts

Someone reminded me that it was just under six weeks to Christmas. Yikes! Today's stop on the TLC Book Tour of Hiddensee, (the new fantasy book by Greogry Maguire that brings the story of the toy maker that carved the Nutcracker to life) has some obvious ties to the holidays--like the famous Nutcracker Ballet that is a tradition for so many. I'm pairing today's book review with a snack (afternoon please--there is alcohol!) of Mulled Hard Cider (Glühmost) and Pear Toast with Pomegranate and Toasted Walnuts--two dishes that would be more than welcome at the holiday table. 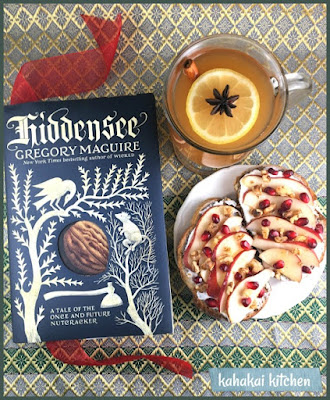 From the author of the beloved #1 New York Times bestseller Wicked, the magical story of a toymaker, a nutcracker, and a legend remade . . .

Gregory Maguire returns with an inventive novel inspired by a timeless holiday legend, intertwining the story of the famous Nutcracker with the life of the mysterious toy maker named Drosselmeier who carves him.

Hiddensee: An island of white sandy beaches, salt marshes, steep cliffs, and pine forests north of Berlin in the Baltic Sea, an island that is an enchanting bohemian retreat and home to a large artists’ colony– a wellspring of inspiration for the Romantic imagination . . .

Having brought his legions of devoted readers to Oz in Wicked and to Wonderland in After Alice, Maguire now takes us to the realms of the Brothers Grimm and E. T. A. Hoffmann– the enchanted Black Forest of Bavaria and the salons of Munich. Hiddensee imagines the backstory of the Nutcracker, revealing how this entrancing creature came to be carved and how he guided an ailing girl named Klara through a dreamy paradise on a Christmas Eve. At the heart of Hoffmann’s mysterious tale hovers Godfather Drosselmeier– the ominous, canny, one-eyed toy maker made immortal by Petipa and Tchaikovsky’s fairy tale ballet– who presents the once and future Nutcracker to Klara, his goddaughter.

But Hiddensee is not just a retelling of a classic story. Maguire discovers in the flowering of German Romanticism ties to Hellenic mystery-cults– a fascination with death and the afterlife– and ponders a profound question: How can a person who is abused by life, shortchanged and challenged, nevertheless access secrets that benefit the disadvantaged and powerless? Ultimately, Hiddensee offers a message of hope. If the compromised Godfather Drosselmeier can bring an enchanted Nutcracker to a young girl in distress on a dark winter evening, perhaps everyone, however lonely or marginalized, has something precious to share. 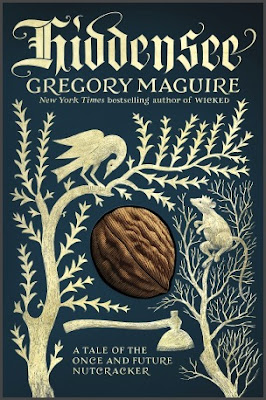 I jumped on this tour when I saw that Gregory Maguire was adapting the story of the Nutcracker both because of the story subject and because I hadn't picked up a Maguire book in a few years. I was a big fan of Wicked and Confessions of an Ugly Stepsister and I liked Mirror Mirror and Lost, but although I own them, I just never got around to reading his other works--something I intend to do one of these days.

Hiddensee is similar to the other books in that it is a secondary character that takes the lead and the bulk of the storytelling. In this case, rather than focusing on the Nutcracker, or even Klara, it is the toy maker, Herr Drosselmeier who presents the Nutcracker to Klara on Christmas Eve. Hiddensee leans to the darker side, as Maguire stories tend to do and takes us to the forbidding deep woods where the young Dirk was a foundling, raised by a woodcutter and his wife. It's not a happy childhood, nor is how he leaves it and goes out into the world, but his story is for the most part interesting (a few chapters dragged a bit for me), as is how the Nutcracker came to be and how he ended up as a gift to a young girl.

If you go into Hiddensee expecting lots of dancers and sugar plum fairies or even much of a Christmas story, you will be disappointed but if you enjoy a quirky, slightly dark story that aligns with Grimm's Fairy Tales and Germanic folklore you will likely get caught up in Dirk Drosselmeier's journey. Although it didn't win my heart as much as Wicked or Ugly Stepsister, I think it is a worthy addition to my Maguire collection. (And I do have to say that I love both the paper jacket--which is gorgeous and the printed book underneath--which is creepy/cool--check out the last picture of the post for a glimpse.) 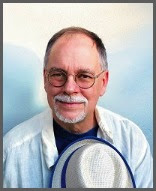 Author Notes: Gregory Maguire is the New York Times bestselling author of Confessions of an Ugly Stepsister; Lost; Mirror Mirror; and the Wicked Years, a series that includes Wicked, Son of a Witch, A Lion Among Men, and Out of Oz. Now a beloved classic, Wicked is the basis for a blockbuster Tony Award–winning Broadway musical. Maguire has lectured on art, literature, and culture both at home and abroad. He lives with his family near Boston, Massachusetts. 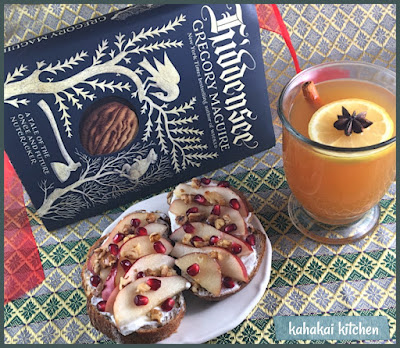 For my book-inspired dish, I decided to combine a few things. First "a cup of cider, aromatic and steamy" is given to Drosselmeier sounded so good that I decided to make a mulled hard cider. Then young Klara imagines a café where on the menu is "...chicken and olive soup. Also some pears on toast. And what else. Some biscuits with honey icing." I thought it would be fun to do the pears on toast but add some pomegranates and walnuts to it--as both play a role in the story and to use labne (yogurt cheese) as a base and drizzle it with honey. Together with the mulled hard cider, it makes a nice snack to enjoy with a good book. 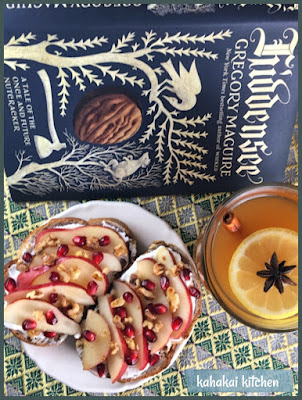 There were a few different recipes online for Mulled Hard Cider (I learned it is called Glühmost and is more popular in South Germany and Austria, consumed in the winter months as a changed from mulled wine). The recipe that I liked best is from a blog called The Kitchen Maus where the blogger used to (she's been on maternity leave since last year) has a passion for making authentic German recipes. She has a good write up on it that I encourage you to read. I kept her recipe ingredients mostly the same--just making a few small changes to her quantities to my tastes and noted in red below. 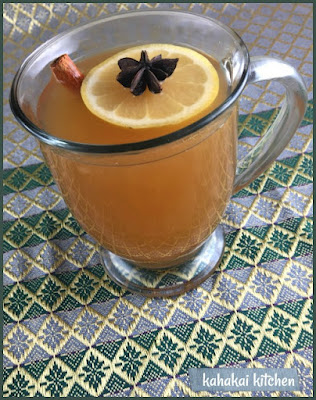 Place all ingredients except for orange juice into a medium saucepan and bring to a low simmer over medium-high heat--being careful not to boil--so the alcohol remains. Reduce heat to low and let cider steep about 20 minutes. add the orange juice a few minutes before it's finished and allow it to warm up. 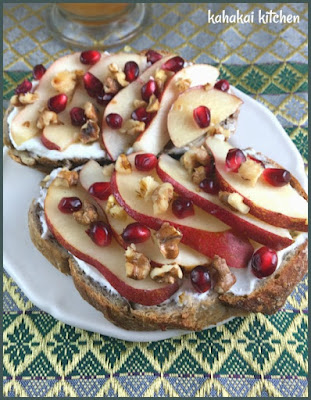 Pear Toast with Pomegranate & Walnuts
By Deb, Kahakai Kitchen
(Serves 2 as a snack)

Toast bread until lightly browned. Let cool for a few minutes and spread with labne (or yogurt, ricotta, cream cheese...)

Core and thinly slice pear and brush the slices with lemon juice. Layer pear slices on top of toast and drizzle with the honey.

Sprinkle tops of toast with chopped toasted walnuts and pomegranate seeds and serve. 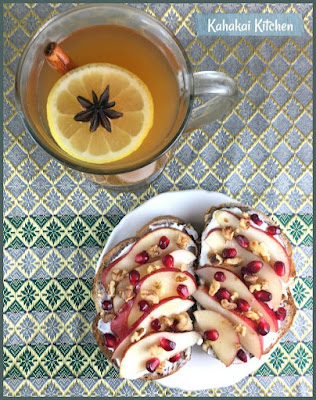 Notes/Results: I may have to swap out my hot mulled apple cider tea for Glühmost. With the hard cider, it reminds me a bit of a warm apple shandy. Comforting and delicious with the cinnamon, star anise, ginger and lemon. Since the hard cider available to me is fairly sweet and I used both apple cider and orange juice, I reduced the amount of honey and it was a good level of sweetness for me. The pair toast was delicious--a nice alternative to my usual savory avocado toast--but not too sweet due to the fruit and tang of the labne. I will definitely make both of these again. 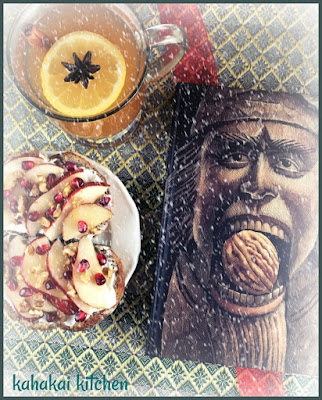 Note: A review copy of "Hiddensee" was provided to me by the author and the publisher, Harper Collins, via TLC Book Tours. I was not compensated for this review and as always, my thoughts and opinions are my own.