The Book Tour Stops Here: A Review of "The Other Widow" by Susan Crawford, Served with a Recipe for Earl Grey Hot Chocolate (+ a Book Giveaway!)

Happy Thursday! On today's TLC Book Tour stop, I am reviewing the new mystery/thriller The Other Widow by Susan Crawford. Accompanying my review is a warming and tasty concoction that blends two classics--hot chocolate and Earl Grey tea. It's sure to warm your belly while you read the review and enter for a chance to win your own copy of this book below! 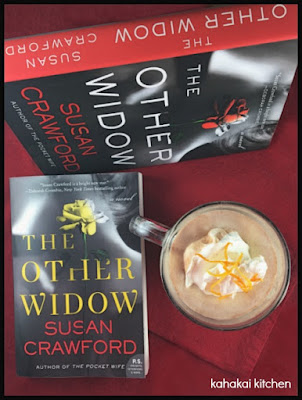 Everybody’s luck runs out. This time it could be theirs . . .

It isn’t safe. That’s what Joe tells her when he ends their affair—moments before their car skids off an icy road in a blinding snowstorm and hits a tree. Desperate to keep her life intact—her job, her husband, and her precious daughter, Lily—Dorrie will do everything she can to protect herself, even if it means walking away from the wreckage. Dorrie has always been a good actress, pretending to be someone else: the dutiful daughter, the satisfied wife, the woman who can handle anything. Now she’s going to put on the most challenging performance of her life. But details about the accident leave her feeling uneasy and afraid. Why didn’t Joe’s airbag work? Why was his car door open before the EMTs arrived? And now suddenly someone is calling her from her dead lover’s burner phone. . . .

Joe’s death has left his wife in free fall as well. Karen knew Joe was cheating—she found some suspicious e-mails. Trying to cope with grief is devastating enough without the constant fear that has overtaken her—this feeling she can’t shake that someone is watching her. And with Joe gone and the kids grown, she’s vulnerable . . . and on her own.

Insurance investigator Maggie Brennan is suspicious of the latest claim that’s landed on her desk—a man dying on an icy road shortly after buying a lucrative life insurance policy. Maggie doesn’t believe in coincidences. The former cop knows that things—and people—are never what they seem to be.

As the fates of these three women become more tightly entwined, layers of lies and deception begin to peel away, pushing them dangerously to the edge . . . closer to each other . . . to a terrifying truth ... to a shocking end. 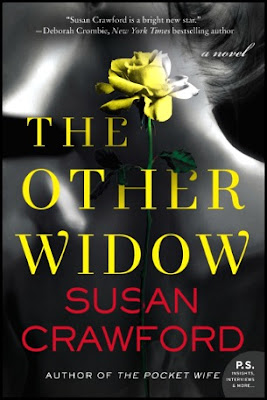 I do like an intriguing and well-paced mystery with plenty of twists and turns that keep me constantly guessing and changing my mind about who the guilty party is--and that is just what I got with The Other Widow. The story is told from the points of view of three women Dorrie, Karen, and Maggie. Dorrie we meet immediately in the car with Joe, her boss and lover. She's a wanna-be actress, but works at Joe's home renovation firm, about to take over the financial duties for the company. Married, with a daughter, when the car skids in the snow and hits a tree she calls 911 and leaves the scene. Karen is Joe's wife and is out with her friend the night of the accident, although she passes it on her way home, not realizing it is Joe's car since he is supposed to be out of town. Karen and Joe's marriage after raising two grown sons has suffered and she suspects that Joe is having an affair. Maggie is the insurance investigator assigned to the accident, a former cop and soldier, suffering from PSTD from her time in Iraq. She immediately thinks that things are not what they seem and that the car accident may not been an accident.

Sometimes I struggle in a book when I don't like, or can't attach to the main characters and I found it difficult to engage fully with both Karen and Dorrie. Especially at first, their actions and reactions to the events playing out didn't make me care for them. Later as more of their thoughts, emotions and lives are revealed through the story, I related to them more and could begin to at least understand where they were coming from. Maggie was a much easier 'sell'--I was immediately drawn into her character--she is smart and compelling and I wanted her to succeed and work through her PSTD issues. Maggie hooked me into the book but once I was in, I became swept up in untangling the story and it ceased to matter whether I liked Karen and Dorrie.

The layers of the story and characters are slowly pulled away, so while not exactly a fast-paced thriller, The Other Woman manages to keep the tension going, ratcheting it up to the end especially as the danger appears to build for Dorrie and Karen. I definitely had some things figured out, but I doubted myself and my conclusions and there were some surprises both at the end and along the way--the mark of a good mystery for me. This is Susan Crawford's second book and reason enough for me to check out her first, The Pocket Wife (and if she were to write more books involving Maggie, I would definitely approve.)

Author Notes: Susan Crawford grew up in Miami, Florida, and graduated from the University of Miami with a BA in English and a minor in psychology. She later moved to New York City and then Boston before settling in Atlanta to raise three daughters and work in the field of adult education. A member of the Atlanta Writers Club and the Village Writers, Susan teaches at Georgia Piedmont Technical College and dabbles in local politics. She lives with her husband and a trio of rescue cats in Atlanta, where she enjoys reading books, writing books, rainy days, and spending time with the people she loves.
Find out more about Susan at her website, and connect with her on Facebook and Twitter.

There was food and drink to be found in The Other Widow--starting with Dorrie's cup of Starbucks hot chocolate that she is trying to keep from spilling in the car with Joe, before the accident. Hot chocolate, Dorrie's drink of choice comes up several times along with coffee, Earl Grey tea--as well as green tea, ginger tea, herbal tea and te' con leche (tea with milk). There is a cocktail called a Chocolate Café Noir that Karen gets with strawberries rather than raspberries (although odd because she says she doesn't like raspberries but then makes her toast with raspberry jam later in the book. Hmm...) and beer. Food-wise, there are breakfasts of English muffins, waffles, various pastries and "monster" muffins, cinnamon rolls, toast, and a strudel coffee cake served with butter and coconut spread. There are mentions of lunches and dinners like pastrami and chicken sandwiches to clam chowder, salads with tuna and artichoke hearts, veggie burgers, lasagna, pasta with red sauce and garlic rolls, and a homemade blueberry cobbler.

For my book-inspired pairing, I decided to combine Dorrie's hot chocolate with Karen's Earl Grey tea and then add in the chocolate from her Chocolate Café Noir cocktail to make a simple Earl Grey Hot Chocolate. 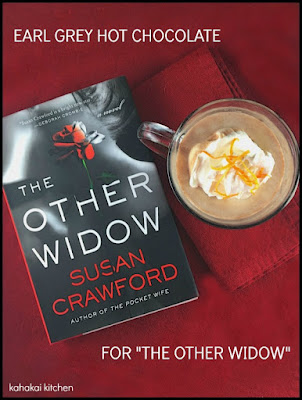 I am a bit mixed on my feelings for Earl Grey tea. In the right time, place and quantity I like it, but when it is too strong, too floral, or too bergamot-forward, it gives me a headache. So I tend to like my Earl Grey mixed or combined with other flavors rather than simply drinking it on its own. I do like the occasional London Fog where it is made into a tea latte, or not too long ago, I made an Earl Grey-infused honey for a cocktail (yum!), and I enjoy it in chocolates or dessert items. For this recipe, I kept it simple and just infused milk (almond milk in this case) with Earl Grey tea bags and whisked a good European hot chocolate mix into the infused milk and topped it with whipped cream and orange zest for a sweet and warming Earl Grey Hot Chocolate. 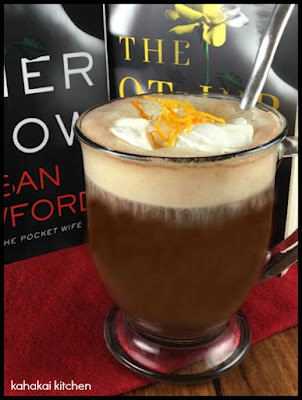 Heat milk in a small pan over medium heat until just before a boil. Remove pan from heat, add tea bags and let steep, covered for 10 minutes. Remove tea bags--squeezing gently to extract all of the tea flavor. Whisk the hot cocoa mix into the milk until thoroughly combined.

Pour hot chocolate into a large mug. Garnish with  a dollop of whipped cream and orange zest if desired. Enjoy! 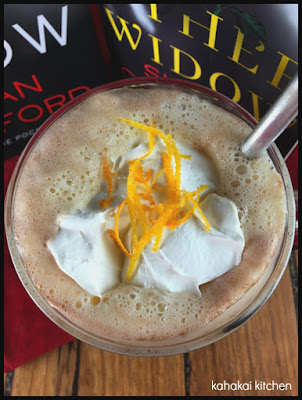 Notes/Results: This turned out to be perfect on a day where I just couldn't seem to get warm. OK, granted it was 70 degrees F. here so I am not complaining, but I have some lingering effects of bronchial crud from this weekend and between that and time in cold buildings, this was a welcome relief and indulgence when I got home. The Earl Grey flavor was just enough for me--fully present but not over powering and it complimented the chocolate well. The only thing that may have made it even better is if I had tucked a shot of alcohol in the mix. ;-) You could also get fancier and make your hot chocolate by melting real chocolate (I'd recommend dark or bittersweet) but I was feeling lazy and I needed to use up some gift cocoa mix anyway. But, either way, I would definitely make this combination again. 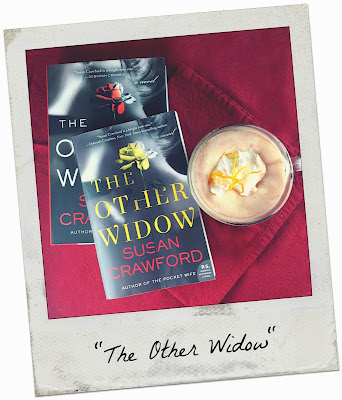 Note: A review copy of "The Other Widow" was provided to me by the publisher, Harper Collins and TLC Book Tours. I was not compensated for this review and as always, my thoughts and opinions are my own.

I received two copies of this book hardback and paperback from the publisher and I decided to share the love and do a giveaway (U.S. addresses, please) for the hardback version.


To enter the Rafflecopter Giveaway below, leave a comment please (Because I like to read them!) ;-) telling me either your favorite winter drink or why you would like to win a copy of The Other Widow.

There are a couple of other optional ways to get more entries to win: 1) Tweet about this giveaway or 2) follow me on Twitter (@DebinHawaii) and/or Author Susan Crawford (@crawfordsusanh), and/or HarperCollins (@HarperCollins) on Twitter. (Note: You can still get extra entries even if you already follow me, the author or publisher on Twitter.)

Deadline for entry is Thursday, December 22.