The Book Tour Stops Here: A Review of "Beauty and Attention" by Liz Rosenberg, Served with a Recipe for Sundried Tomato Spread, Served with Baguette

Got the Election Day blues? Well, besides saying that I voted by mail last week and I hope you exercised your right to vote your opinion, we are staying away from politics today and instead are focused on my two favorite things--books and food. On today's TLC Book Tour stop, I am reviewing the historical novel Beauty and Attention by Liz Rosenberg and I am pairing my review with a simple but tempting Sundried Tomato Spread with Baguette. 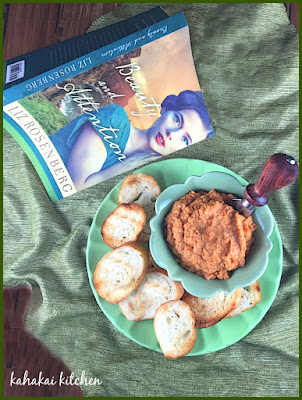 The riveting story of one brave young woman’s struggle to free herself from a web of deceit.

For misfit Libby Archer, social expectations for young women in Rochester, New York, in the mid-1950s don’t work. Her father has died, leaving her without parents, and her well-meaning friends are pressuring her to do what any sensible single girl must do: marry a passionate, persistent hometown suitor with a promising future. Yet Libby boldly defies conventional wisdom and plans to delay marriage—to anyone—by departing for her uncle’s Belfast estate. In Ireland, Libby seeks not only the comfort of family but also greater opportunities than seem possible during the stifling McCarthy era at home.

Across the Atlantic, Libby finds common ground with her brilliant, invalid cousin, Lazarus, then puts her trust in a sophisticated older woman who seems to be everything she hopes to become. Fraught with betrayal and long-kept secrets, as well as sudden wealth and unexpected love, Libby’s journey toward independence takes turns she never could have predicted—and calls on courage and strength she never knew she had. 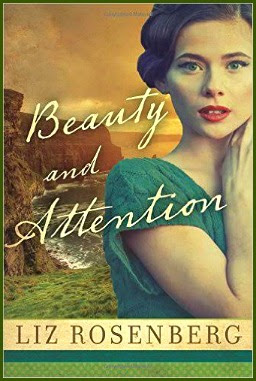 This is the second book by Liz Rosenberg that I have read and reviewed. The first was her 2014 The Moonlight Palace. Like The Moonlight Palace, Beauty and Attention is a short and quick historical novel, with a young female main character looking to find her place in the world. In Beauty and Attention, we meet Libby Archer, in her early twenties and a bit adrift since her alcoholic father has died--he never quite recovered from the death of her mother. Libby isn't sure what she wants to do--she just knows she isn't ready for marriage and settling down as most of her peers are doing in the the mid-1950s. Faced with a marriage proposal from inventor and entrepreneur Cap Lockwood, she instead travels to the Belfast estate of her uncle in Ireland, forming a fast friendship with her sickly cousin Lazarus and attracting the attention of an English Lord. As the synopsis says, there is a betrayal (I don't want to go into any detail and spoil the story), and Libby seeks to find herself and her happiness.

Libby is a likable, if perhaps too mild of character--especially in the beginning of the book. Her logic and reasoning are hard to follow at times and I found myself struggling to get to know her. I far preferred her spunkier and more dimensional best friend Henry (Henrietta) who seemed to know her own mind much more than Libby. I think with the short length of the book, it was tough to form as strong of attachment to the characters as I would have liked. I would have enjoyed a deeper dig into Libby, Henry, Lazarus and Cap Lockwood, as well as some of the other characters that we meet later on. It was hard to determine the motives for behaviors and understand why Libby and others made the decisions they did. For example, there is a big plot point in the book that suddenly just happened and I wanted the back story of how we ended up there.

The author notes in the afterward that the book is her homage to the Henry James classic, Portrait of a Lady, brought forward from the nineteenth century to the mid-twentieth century. Since I must confess to not ever reading Portrait of a Lady (although I just might now...), I can't judge how well she accomplished that goal. The settings--particularly Ireland and Rome, and Rosenberg's descriptive writing were beautiful and drew me into the story, I just wanted to stay there longer. I did like some of the twists--although I saw one of the main ones coming, and I liked seeing Libby's eventual growth and the ways things resolved, so ultimately I did enjoy the book and will definitely read more from Rosenberg. If you like a shorter book and enjoy historical fiction set in 1950s Europe, and/or have a fondness for Henry James and Portrait of a Lady, Beauty and Attention is an easy read and a pleasant diversion, just maybe a bit too quick to the finish. 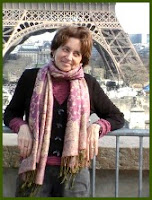 Author Notes: The author of more than thirty books for adults and young readers, Liz Rosenberg has published three bestselling novels, including The Laws of Gravityand The Moonlight Palace. She has also written five books of poems, among them 2008’s Demon Love, which was nominated for a Pulitzer Prize, and After Great Grief, forthcoming from the Provincetown Arts Press. Her poems have been heard on NPR’s A Prairie Home Companion. Rosenberg’s books for young readers have won numerous awards and honors and have been featured on the PBS television show Reading Rainbow. A former Fulbright Fellowship recipient, Rosenberg teaches English at the State University of New York at Binghamton, where she earned the Chancellor’s Award for Excellence in Teaching. She lives in Binghamton with her daughter, Lily, and a shih tzu named Sophie. Although she has homes in New York and North Chatham, Massachusetts, her heart is still in Ireland.

There is not a huge food presence in Beauty and Attention, the fashion and scenery of Ireland and Rome take up the majority of the descriptions, but there were a few mentions. There was plenty of tea and scones and clotted cream, and a "persimmon-colored teacup, oranges in a bowl, a mention of both an Irish breakfast and "a real French breakfast," lemonade, the smells of diesel and fried potatoes, wood smoke and cake, and "the sharp odor of juniper berries" (which put in mind of gin), a bag of pastries and a baguette, tea and biscuits, canapés, an éclair, olive trees, soup and porridge, crackers, and a bunch of purple grapes, sweets and rolls, puddings, cakes and urns of coffee and tea, and a sandwich and a bottle of mineral water. 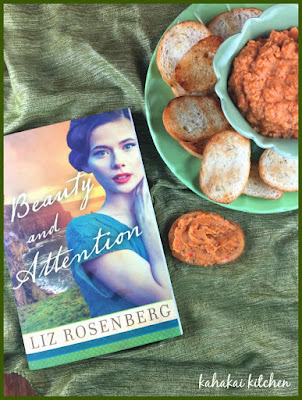 Since there wasn't one thing that really stood out, for my book-inspired dish, I decided to make something using a baguette and then added in the canapés idea to make an appetizer, and wanted to use sundried tomatoes and Italian herbs for the nod to Rome.

I found a recipe for Sundried Tomato Spread on Thug Kitchen and thought it sounded delicious and I love that it is vegan,while getting some good protein and fiber from the white beans blended in. I kept the ingredients the same, but made a couple of small changes to the preparation--namely sautéing the garlic and dried herbs in with the onion to maximize the flavor (and taking out the profanity that one gets at Thug Kitchen--which I don't mind, but I tend to run a mostly PG blog!). ;-) I put my prep steps below, as well as the link to the recipe on the Thug Kitchen site. 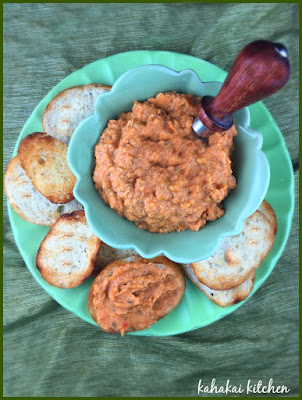 Place the sundried tomatoes in a small bowl and cover them with the hot water. Allow to re-hydrate for 15-20 minutes.

Meanwhile, add a little olive oil to a small pan and cook onion over medium heat until they begin to caramelize (about 10 minutes). When close, add the garlic slices, dried basil and dried oregano and cook another minute or two until fragrant.

Remove re-hydrated tomatoes from the soaking water (reserving the liquid) and chop. Place the beans, chopped sundried tomatoes, 2 tablespoons of the tomato soaking liquid, olive oil, lemon juice, red wine vinegar, and tamari into the bowl of a food processor. Add the onion-garlic-herb mixture and process until smooth, adding additional soaking liquid through the tube until the mixture is smooth and creamy. Taste and season with salt, pepper and extra seasoning if needed.

Serve with grilled baguette slices, crackers, or veggies, or use as a sandwich spread. Spread will keep about 1 week, tightly covered in the fridge. 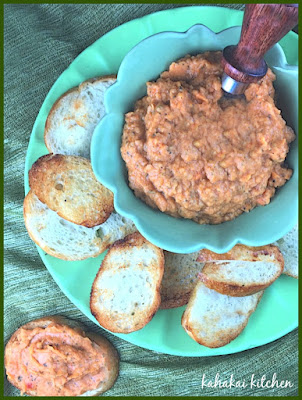 Notes/Results: This dip/spread has such great herby tomato flavor and a rich and creamy texture. The lemon juice and red wine vinegar give it a slightly tangy taste that goes well with the sweetness of the tomatoes. It was perfect on the crispy baguette rounds and I have a feeling that it will make a delicious veggie sandwich spread tomorrow. Easy and it will please vegans, meat-eaters and everyone in between, I will definitely make it again. 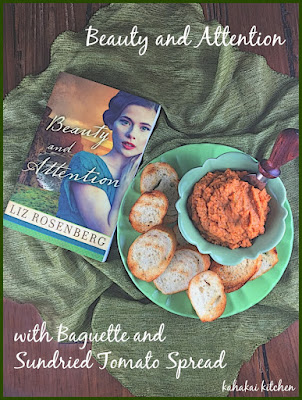 Note: A review copy of "Beauty and Attention" was provided to me by the publisher and TLC Book Tours. I was not compensated for this review and as always my thoughts and opinions are my own.