The Book Tour Stops Here: A Review of "June' by Miranda Beverly-Whittemore, Served with a (Mostly Non-Dairy) Malted Black-and-White Milkshake

Today's TLC Book Tour stop has us traveling to rural Ohio exploring a family mystery that began sixty years ago in June, a novel by Miranda Beverly-Whittemore. I'm serving up my review with the recipe for a mostly dairy-free version of a decadent Malted Black-and-White Milkshake, made with homemade chocolate sauce and vanilla bean coconut ice cream. I find that nothing will get you through a Monday better than a good book, chocolate, and ice cream! 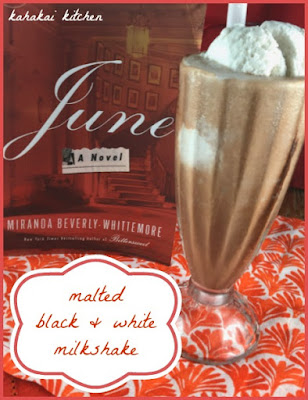 From the New York Times bestselling author of Bittersweet comes a novel of suspense and passion about a terrible mistake made sixty years ago that threatens to change a modern family forever.

Twenty-five-year-old Cassie Danvers is holed up in her family’s crumbling mansion in rural St. Jude, Ohio, mourning the loss of the woman who raised her—her grandmother, June. But a knock on the door forces her out of isolation. Cassie has been named the sole heir to legendary matinee idol Jack Montgomery’s vast fortune. How did Jack Montgomery know her name? Could he have crossed paths with her grandmother all those years ago? What other shocking secrets could June’s once-stately mansion hold?

Soon Jack’s famous daughters come knocking, determined to wrestle Cassie away from the inheritance they feel is their due. Together, they all come to discover the true reasons for June’s silence about that long-ago summer, when Hollywood came to town, and June and Jack’s lives were forever altered by murder, blackmail, and betrayal. As this page-turner shifts deftly between the past and present, Cassie and her guests will be forced to reexamine their legacies, their definition of family, and what it truly means to love someone, steadfastly, across the ages. There is something about a book with a house that has its own personality and even thoughts and feelings, but not in a horror story kind of way. Twin Oaks, built by an oilman, who broke ground on the lot in 1895, has seen a lot of history before Cassie ends up there in 2015 after the death of her grandmother June. June was one of Twin Oaks, favorite occupants, along with her friend Lindie, and the house holds the secrets of a terrible night in 1955 that changed several lives. June is an absorbing novel, with two story lines and time periods set sixty years apart, but woven together. It's a bit mystery and suspense with a gothic feel, centers around family and secrets, and it has a smidge of romance worked in there too. Set in the summer of both 1955 and 2015, it is a absorbing story, perfect for a warm summer night.

I have not read any of author Miranda Beverly-Whittemore's previous books but I found myself quickly caught up with her lush and vivid descriptions and how well the stories moved back and forth. When the book switched between 1955 and 2015, I found myself eager to revisit each time period and its characters and learn more about the mystery, but I also was sorry to leave the previous decade and characters I had been caught up in--I take that as the mark of a well-written and strongly intertwined story. If pressed, I would have to say that the summer of 1955 and Lindie and June were most intriguing, but Cassie grew on me and I like her snarky humor and how she dealt with her possible family and the small entourage from Hollywood when they descended on her. Although the mystery and its details were not that difficult to figure out--Twin Oaks tells us almost from the start that a murder occurred and who did it, it did not detract from the pleasure of the story. My only complaint--the end came too quickly, I wanted more time at Twin Oaks. Add this one to your summer reading list.

Author Notes: Miranda Beverly-Whittemore is the author of three other novels: New York Times bestseller Bittersweet; Set Me Free, which won the Janet Heidinger Kafka Prize, given annually for the best book of fiction by an American woman; and The Effects of Light. A recipient of the Crazyhorse Prize in Fiction, she lives and writes in Brooklyn.

There is actually quite a bit of food mentioned in June. If you could see my ARC of the book, you would see a ton of page corners turned back (yes, it's a bad habit!) with all of food that is in there. From the chapters set in the 1950s, there are ice cream sodas, fried chicken and mashed potatoes, hot milk steamed with honey and vanilla, biscuits, eggs, Cokes, Vienna sausages eaten straight from the can, anchovies, popcorn, and the "occasional slab of fried Spam;" coffee cake, pork chops and cross-patch potatoes, Rice Krispies, party fare of champagne, tea cakes and little sandwiches, candied ham, cookies, cut-up pineapple, meringues and mint patties, and a few classic restaurant menu items like creamed chicken in a mashed potato nest, Shirley Temples, a rib eye--medium-rare with a baked potato and creamed spinach, and a whiskey-neat.

In current day, when she is eating, Cassie seems to exist on junk food like the green olives stuffed with pimentos, sour cream and onion potato chips, a hunk of cheddar cheese and a carafe of flat 7-Up she serves to Nick when he first shows up, "Damn those hostess genes." Other food consumed by Cassie included Jack Daniels, Buffalo Wild Wings, egg sandwiches, Velveeta on Ritz, and a pitcher of Hawaiian Punch "the color of maraschino cherries," DQ--burgers, fries, and dip-top soft-serve cones, canned green beans and tuna fish, pickles, Snickers, tuna casserole, boxed mashed potatoes topped with boxed macaroni and cheese, and a side salad of raw broccoli and mayonnaise, frozen pizza, a Twix and some zucchini, red Jell-O with Cool Whip, Smirnoff Ice screwdrivers, and Bud Light, lemonade and Ritz, whiskey sours, and a classic Thanksgiving dinner. Cassie's potential new relatives eat like you imagine Hollywood celebrities and their staff would with shakes of spinach, kale, and ginger, egg white omelettes and turkey bacon, raw almonds, espresso, red peppers stuffed with a mixture of quinoa and spices, baba ghanoush and hand-ground flaxseed crackers, baby kale and heritage grains, tofu loaf, plums, avocados and apples, blueberry quinoa pancakes,hibiscus tea--sweetened with agave, cauliflower bisque, roasted salmon and asparagus, spinach and cucumber salad with lemon juice on the side, amarath and haricots verts. 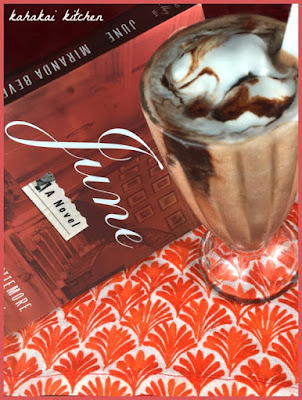 I was toying between eggplant baba ghanoush, quinoa-stuffed red peppers, and the hibiscus tea with lemonade but it was a meal that Cassie ordered at Illy's, the local dinner of a cheeseburger with extra special sauce , fries with a side of Russian dressing and a black-and-white milkshake that stuck in my mind. Mainly it was the black-and-white milkshake which she has poured into two glasses to share with Tate's assistant Hank. There is just something about a classic diner milkshake, thick and creamy, and it seemed like something that would fit right into either 1955 or 2015.

I did a bit of research online on classic black-and-white milkshakes and some recipes called for malt and others did not. The one thing that seemed pretty definite is that it is made with vanilla ice cream and chocolate syrup--not chocolate ice cream, making it a glass of milky chocolate goodness. I ended up liking Bobby Flay's version the best and decided to do a mostly dairy-free version of it, using a coconut milk-based vanilla bean ice cream recipe that I pinned recently from Minimalist Baker. The malt powder I had on hand (Ovaltine) is not dairy-free but, having less dairy means less clogging up my nose and breathing, and there isn't that much of the malt powder in the shake. Since I was using up things, I decided to use the last of a homemade, less-sweet dark chocolate syrup I made a few months ago for a chocolate soda. (The link for that recipe is on the recipe for the shake.) My small changes are noted in red below. 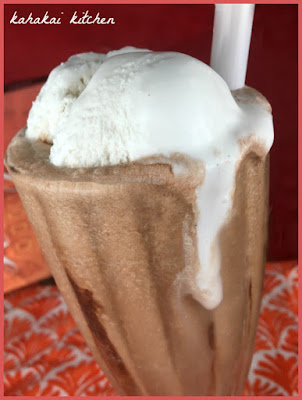 Place 1 1/2 pints of ice cream, malt powder, and 4 ounces chocolate sauce in a blender and blend until smooth. Pour shakes into 2 tall glasses, leaving a little room at the top.

Place an extra scoop of ice cream on top of each shake and drizzle the remaining 2 ounces chocolate sauce over.

Garnish with a large dollop of whipped cream and some chocolate shavings if desired. Serve immediately. 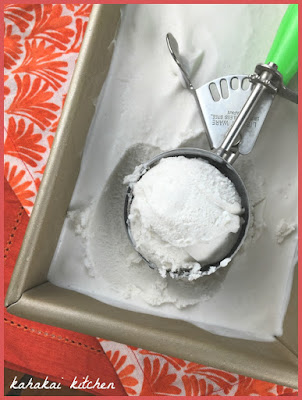 Place mixture in the chilled drum of an ice cream maker and churn according to manufacturer's instructions, about 40 minutes, until cream--like soft serve.

Transfer ice cream to a freezer-save container and freeze for at least 4-6 hours, until firm. Set out for 5-10 minutes before serving to soften.

Ice cream will keep up to 10 days, in an airtight container in freezer. 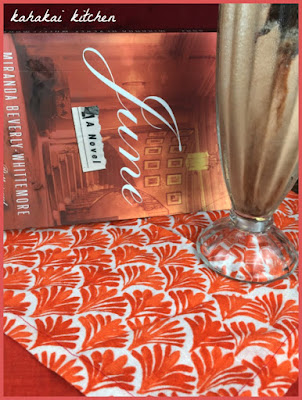 Notes/Results: A thick, creamy, dreamy milkshake--really decadent, delicious and satisfying. The vanilla bean coconut ice cream is rich and delicious and tastes of vanilla rather than coconut, making it perfect for blending with the chocolate syrup and malt powder. You could easily make this vegan by leaving out the malt or sourcing a vegan barley-malt which I would have done if I wasn't working my way through a large container of Ovaltine. I made a half-recipe which, as rich and thick as this milkshake is, would easily serve 2. I drank half and froze the rest for later to eat with a spoon. I would definitely classify this as a dessert rather than a beverage but it is a delicious indulgence either way. I will happily make it again. The dairy-free ice cream will also be on rotation this summer as it will be perfect with fresh fruit. 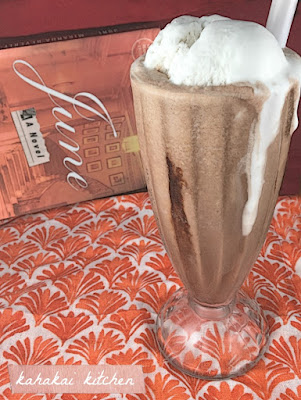 I am sharing this post with Novel Food #27, hosted by my friend Simona at briciole and celebrating the combination of food and books. See her announcement post here.

Note: A review copy of "June" was provided to me by the publisher and TLC Book Tours in return for a fair and honest review. I was not compensated for this review and as always my thoughts and opinions are my own.