Aunty Lee is back! I'm happy to be a stop today on the TLC Book Tour for Aunty Lee's Chilled Revenge, the third book in the Singaporean foodie mystery series by Ovidia Yu. Accompanying my review is a recipe for Soya Bean Curd (Soy Pudding) with Fresh Mango Chunks inspired by the book. 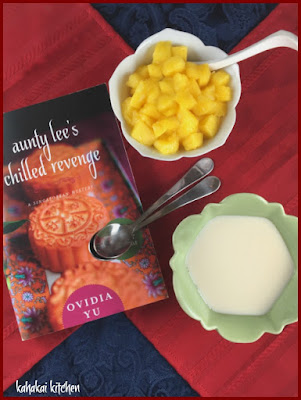 Slightly hobbled by a twisted ankle, crime-solving restaurateur Aunty Lee begrudgingly agrees to take a rest from running her famous café, Aunty Lee’s Delights, and turns over operations to her friend and new business partner Cherril.

The café serves as a meeting place for an animal rescue society that Cherril once supported. They were forced to dissolve three years earlier after a British expat killed the puppy she’d adopted, sparking a firestorm of scandal. The expat, Allison Fitzgerald, left Singapore in disgrace, but has returned with an ax to grind (and a lawsuit). At the café one afternoon, Cherril receives word that Allison has been found dead in her hotel—and foul play is suspected. When a veterinarian, who was also involved in the scandal, is found dead, suspicion soon falls on the animal activists. What started with an internet witch hunt has ended in murder—and in a tightly knit, law-and-order society like Singapore, everyone is on edge.

Before anyone else gets hurt—and to save her business—Aunty Lee must get to the bottom of what really happened three years earlier, and figure out who is to be trusted in this tangled web of scandal and lies. 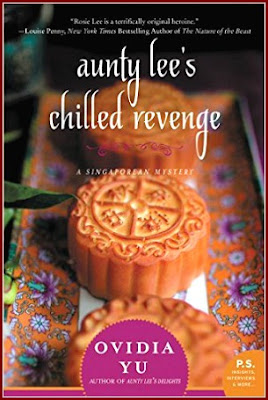 My Review:
Aunty Lee is a fun and likable lead character, even with her being so "kaypoh" (always minding the business of others), she comes from a good place--wanting to nurture, feed and solve problems for friends and family. Not that she doesn't love gossip and takes a healthy dose of pride at being a few steps ahead of the police in her crime-solving efforts. In this book, an injured ankle has sidelined Aunty Lee from running her café and she is relying on her assistant/domestic helper Nina and business partner Cherril to run things, with lots of unsolicited opinions and input from Selina (Aunty Lee calls her Silly-Nah--I love that!), her step-daughter-in-law. When a mystery pops up involving the murder of American ex-pat demonized for putting down a puppy she adopted from an animal rescue society that Cherril was a part of, Aunty Lee is all too happy to step in, taking the dead woman's sister home with her in hopes that she will be able to discover secrets she might hold and solve the crime. A couple more deaths pile up but Aunty Lee, working with and around the local police, is there to assemble all of the ingredients, put the recipe together and solve the mystery.

As I pretty much do with all series, I recommend that you read the first two books before this one. It is possible to catch up and know what is going on without doing so but you will miss out on the backstory, the introduction of all of the characters and how the relationships have evolved within Aunty Lee's inner circle--Nina, Cherril and her husband Mycroft, stepson Mark and Silly-nah, Police Inspector Salim, and Commissioner Raja. The big mystery here is pretty easy to figure--out even the twists, as they often are in cozy mysteries, but there is good entertainment in getting there. For me the focus and pleasure of this series is in the food and the descriptions of life in Singapore, a place I spent time in several years ago for work. It's great fun to read the names of places that I visited and the foods I enjoyed, but even if you haven't had the chance to visit, Ovidia Lee's descriptions will make you feel like you have. Her descriptions of the food will make you hungry--it is impossible to read an Aunty Lee story without developing a craving for at least a few of the many meals cooked in the café or at Aunty Lee's home. If you love cozy mysteries, yummy food, and taking armchair trips with your reading, you will enjoy this series. I am looking forward to future books and more delicious foodie adventures with Aunty Lee.

Author Notes: Ovidia Yu is one of Singapore’s best-known and most acclaimed writers. She has had more than thirty plays produced and is also the author of a number of mysteries. She received a Fulbright Fellowship to the University of Iowa’s International Writers Program and has been a writing fellow at the National University of Singapore.

Of course there is plenty of food to be found around Aunty Lee and her Peranakan café, Aunty Lee's Delights, especially Singaporean and Malaysian delicacies like her famous achar (pickles) and sambals (chili-based condiments), fried prawns and spicy mutton, nasi lemak (rice cooked in coconut milk and pandan leaf), prata (a roti-like pancake or flatbread),  juicy shrimp wontons, seafood noodles in lemongrass and garlic sauce, chee cheong fun (rice paste noodles rolled around shrimp and scallops and steamed), crispy youtiao (dough fritters) and moon cakes, just to name some of the tempting dishes. 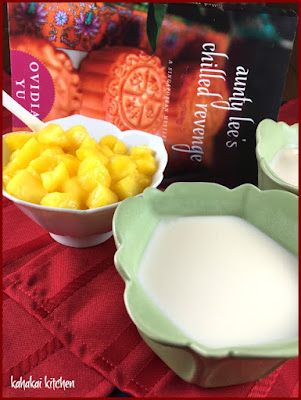 This series has inspired some delicious time in the kitchen for me already with a (still crave-worthy) bowl of Coconut and Salmon Laksa from the first book: 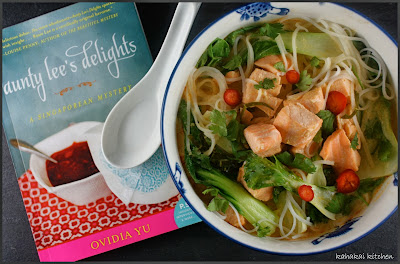 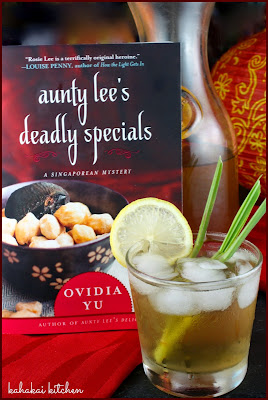 So, since we have had an entree and a beverage, it seemed like a good plan to make a dessert. I decided I should give soya pudding and mango a try. Described in the book as a "warm bowl of milky, sweetened bean curd and a dish of mango chunks..." and then later as a "delicate, sweetened tofu pudding." I did want to make a chilled version of soya beancurd instead of the warm one as I had a not-so-great experience with sweet warm beancurd in Singapore. In retrospect, I do think there were contributing factors to why I disliked it so much--I was there working long hours to certify a new training manager, running training classes all day, and I will admit, slightly (OK, really) hungover one morning from WAY too much beer and spicy chili crab at a dinner with some co-workers. A very nice partner brought me "breakfast"--a Styrofoam cup full of a warm, sweet syrupy liquid and chunks of tofu/bean curd mixed in with pieces of sweet canned fruit. I tried it, being polite and appreciating the gesture and then felt bad and pretended to eat and enjoy it when honestly, it made me gaggy between the warmth, texture, and cloying sweetness. (Side-note: A good rule of thumb if you really don't like something is not to pretend to like it too much lest you get it brought to you the next two mornings because of how much you enjoyed it!) 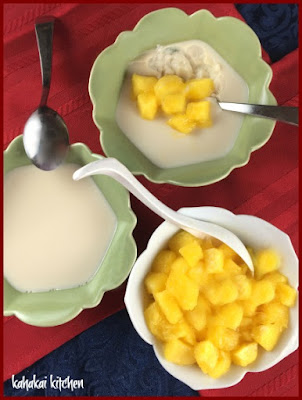 I am stubborn about retrying things I dislike and finding a way to prepare them so that I will enjoy them (and tastes do evolve), so reading online about a chilled version of soy pudding made me decide to make it as my book-inspired dish. A chilled version also makes sense with the title of the book and its namesake dish--Aunty Lee's Chilled Revenge, her newest creation, named because "People say revenge is a dish best served cold..." Aunty's Lee's Chilled Revenge used gelatin in a savory way, making a "tom-yam-flavored spicy seafood jelly made in her largest lotus flower mold and turned out onto a bed of watercress and surrounded by chunks of pineapple. Suspended in the cold blossom's savory pale yellow gel were chunks of crabmeat, prawns, scallops, and red, green, and orange filaments of sweet peppers, baby asparagus, and carrots."

I used my gelatin in this simple 4-ingredient recipe for  sweet Soya Beancurd/Soy Pudding from seriouseats.com. It's as Aunty Lee says, "Sometimes getting successful results isn't a matter of stirring and applying heat all the time. Sometimes you have to step back and sit down and let things get cold enough for their true nature to show."

Heat soy milk over medium heat, stirring, just until gelatin dissolves (do not boil soy milk). Stir in remaining 1 1/2 cups soy milk and vanilla. Sweeten to taste. Pour into serving bowls and chill until set and very cold, 3 to 4 hours. 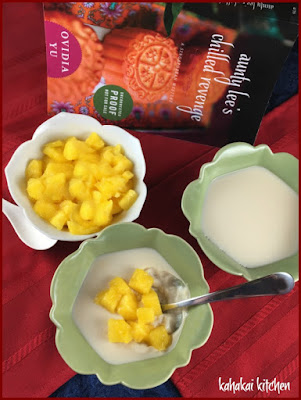 Soy Milk/Sweetener: The recipe notes to use your favorite soy milk and sweeten to taste based on how sweet it is. I used a locally-made organic soy milk that is a little thicker (I thought it would be good for pudding) and has a natural sweetness to it. I used about a tablespoon of maple syrup and it was plenty. 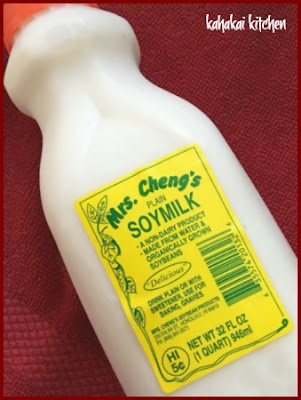 Notes/Results: A slightly sweet and very mild creamy pudding, a bit like a posset or pots de crème. Probably not enough flavor for me to love on its own, but quite nice with fresh fruit like the cold mango, or perhaps some berries or bananas. I definitely think for this type of pudding, chilled works best for me rather than the warm soya bean curd described in the book. Overall I liked it and would try it again--maybe with some different flavorings to jazz it up a bit more. 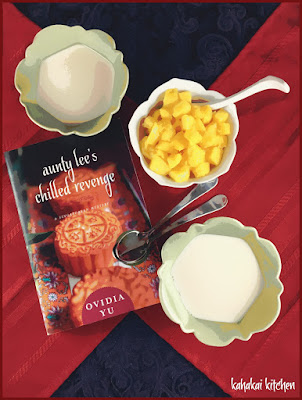 Aunty Lee's Chilled Revenge is my seventh entry for the Foodies Read 2016 event. You can check out the April Foodies Read linkup, hosted by Heather at Based on a True Story, to see what foodie books that everyone is reading this month.

I will be linking up this review and recipe to the Weekend Cooking event at Beth Fish Reads, a weekly event that is open to anyone who has any kind of food-related post to share. For more information, see the welcome post.

Note: A review copy of "Aunty Lee's Chilled Revenge" was provided to me by the publisher and TLC Book Tours in return for a fair and honest review. I was not compensated for this review and as always my thoughts and opinions are my own.