The Book Tour Stops Here: A Review of "Beneath Still Waters" by Cynthia A. Graham, Served with Fried Catfish and Zippy Dipping Sauce

On today's TLC Book Store stop we have a review of the first in a Southern historical mystery series, Beneath Still Waters by Cynthia A. Graham. Along with my review of this short book that packs an amazing amount of story and character development in a little over two hundred pages, I'm serving up some Fried Catfish with Zippy Dipping Sauce inspired by my reading. 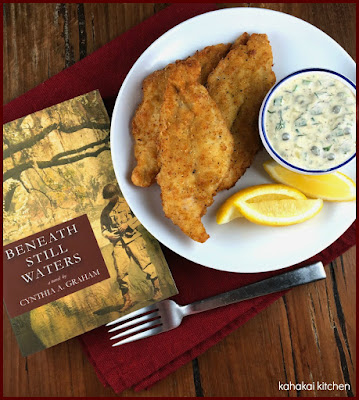 The swamps and bayous around Cherokee Crossing, Arkansas have always been dark and mysterious, but on this summer day two boys stumble across the remains of a baby girl, headless and badly decomposed. Hick Blackburn, a reluctant sheriff with a troubled past is called to the scene. With nothing to go on except the baby’s race and sex, the task of discovering who she is and how she died challenges all of Hick’s investigative skills. But Hick faces a deeper challenge. The vision of the infant has left him shattered, a reminder of a war crime he has tried to lock away, a crime that has begun to eat away at the edges of his life, destroying him one relationship at a time.

With the aid of his deputies, Hick will begin to piece together his investigation, an investigation that will lead him to question everything. As he is forced to examine the town he grew up in, he will come to terms with the notion that within each of us lays the propensity for both good and evil. His investigation will turn up lies and ignorance, scandal and deceit, and the lengths a mother will go in order to hide her shame. 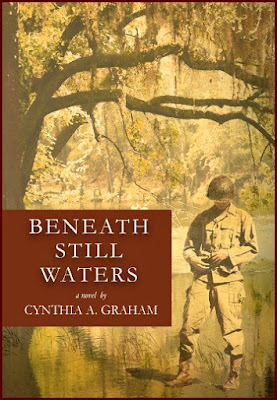 My Review: I had my doubts about just how much I would get into this story and characters and how just much story would actually get told based on the short length, but Beneath Still Waters pulled me right into the mystery and the characters. Our lead is Andrew (Hickory or Hick) Blackburn, recently returned WWII soldier and recently appointed sheriff of his community. Hick is young, deeply troubled by his wartime experience in Belgium, and facing criticism--particularly from the town newspaperman about his capabilities. He's also still pining away for diner waitress Maggie, even though he was the one to break their engagement after his return from overseas. I quickly grew attached to Hick and wanted to follow him around--feeding and hydrating him, making him cut down on the caffeine, and slapping the countless cigarettes out of his hand. His issues and his focus on the crime, along with the obvious PSTD, made him seem constantly on the edge. Hick's relationship with his family--mother, sister Pam, and brother-in-law and deputy Adam are strong. I particularly liked Adam who at close to three decades older than Hick, operates as an older brother as well as his right hand man--and manages to do both well. Adam and Dr. Jake Prescott, the town physician and coroner, along with another deputy, Wash, are Hick's crime solving team.

Beneath Still Waters has a pretty horrific crime attached to it--the finding of the body of an infant girl, badly decomposed and headless. It's no wonder that it has Hick and the town reeling as they try to figure out who in the small Southern community of Cherokee Crossing, Arkansas delivered her and then who murdered her and why. Although the WWII era setting is well done and feels authentic, it doesn't overwhelm the story and I felt as if it could be set in any time period. Author Graham paints a vivid portrayal of this tiny poverty-stricken town and its citizens, which made me guess and constantly second guess who the guilty were. The answers and the twists getting there were absorbing and I sped through this book. Luckily, I was able to download an ARC of the sequel, Behind Every Door on NetGalley, and have made a trip back to Cherokee Crossing. So far, it's as good as the first and makes me hope there are more Hick Blackburn books in the future. Mystery, crime, and police procedural fans should like this one, as well as those who like historical fiction and mystery. 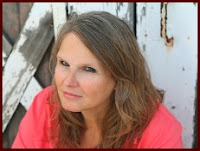 Author Notes: Cynthia A. Graham has a B.A. in English from the Pierre Laclede Honors College at the University of Missouri in St. Louis. She was the winner of several writing awards during her academic career and her short stories have appeared in both university and national literary publications. Cynthia is a member of the Historical Novel Society, the St. Louis Writer’s Guild, the Missouri Writer’s Guild, and Sisters In Crime. Beneath Still Waters is her first novel.

I won't lie, this was a tough book to come up with a specific dish for due to its focus on the mystery as well as its hero's habit of going days with no food. There were just not a lot of food mentions beyond coffee (unless you count cigarettes as a food), just a few diner meals and dinners--eggs and grits, pancakes and bacon, a burger with slaw, fries and apple pie, fried chicken, and Hick's sister's oatmeal and raisin cookies.

Not eating meat or poultry and not feeling like baking, I found my inspiration in fishing. 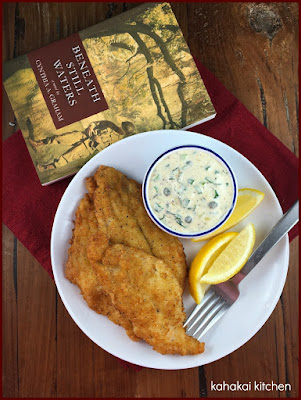 Although Jenny Slough (a swampy lake) was a crime scene in the book, it was also a place where teenagers came to park and people came to fish. Dr. Prescott tells Hick: "Your daddy and I spent hours out here. Some of my best memories  are coming out with a frying pan, cornmeal, and some onions. We had us some times when we were young."

I decided to focus on the happy memories of the place and to make a Southern-feeling  Fried Catfish. I did make a couple of changes based on what I had (a fish coating including yellow cornmeal) instead of cornmeal and for my onion, using green onions in the hybrid tarter sauce/remoulade I made to go with my fish. After all, if you are going to splurge some calories on fried fish, you might as well enjoy a creamy sauce with it. ;-) 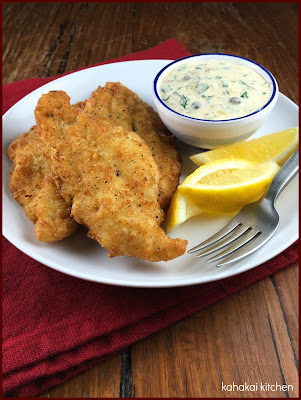 Place all ingredients into a small bowl and mix thoroughly. Let chill in fridge for an hour or two for flavors to blend. Serve with fried fish or shrimp. 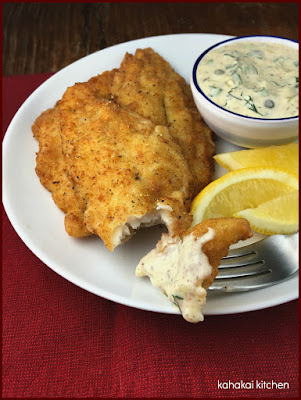 Notes/Results: I don't fry a lot of foods because I like to eat mostly healthy and I suppose I could have "oven-fried" this fish, but I wanted to keep it more authentic to the mention in the book. And, there is something to be said for a piece of freshly fried catfish, the crispiness of the coating giving way to the tender flaky fish within. Add the creamy, tangy, zippy sauce and it is pretty much heaven on earth. Definitely splurge-worthy on occasion. I would happily make it again. 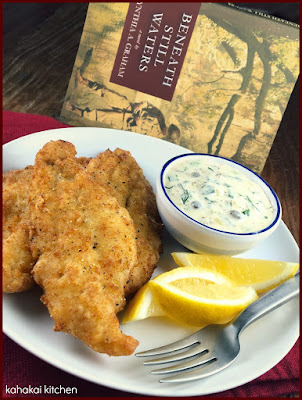 I will be sharing this book review and food pairing with Beth Fish Reads: Weekend Cooking Event, a weekly event that is open to anyone who has any kind of food-related post to share. For more information, see the welcome post.

Note: A review copy of "Beneath Still Waters" was provided to me by the publisher and TLC Book Tours in return for a fair and honest review. I was not compensated for this review and as always my thoughts and opinions are my own.