If you have ever read a restaurant critic's review and thought "I could do that!" or dreamed of being paid to eat (a lot) at exclusive or expensive restaruants on someone else's dime, you may want to read The Restaurant Critic's Wife by Elizabeth LaBan on today's TLC Book Tour stop. Being a critic isn't as easy or glamorous as it sounds and it's even less so being the restaurant critic's significant other. At least that's Lila's experience as a mother of two and the wife of Sam, Philadelphia's newest restaurant critic. Sam's obsessive need to remain anonymous is cramping Lila's style and driving her crazy and it's a funny and food-centered ride. Accompanying my review is a bowl of (Vegan) Stove Top Mac & Cheese inspired by one of my favorite parts of the book. And, there's even a chance to win a copy of your own at the end of this post...pretty great for a Monday. 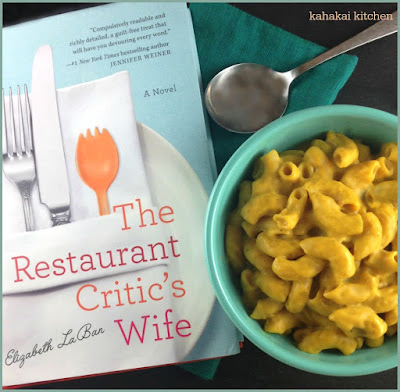 What could be better than being married to a restaurant critic? All those amazing meals at the best restaurants…pure nirvana, right? Well, Lila Soto, the heroine of Elizabeth LaBan’s charming new novel, The Restaurant Critic’s Wife (Lake Union Publishing; January 5, 2016), might tell you otherwise. Sure the food is heavenly, but the downsides are considerable—especially being married to a man who is obsessed with his job and paranoid to the point of absurdity about being “outed” from his anonymity. Add to the scenario the fact that Lila has given up her own career to follow her husband’s job to a new, unfamiliar city, and that she is now a fulltime stay-at-home mom—a gig she never aspired to, despite loving her kids—and you begin to see why Lila is doubting every life decision she’s ever made.

Though it is not an autobiography by any means, it can’t be overlooked that Elizabeth LaBan is herself married to Philadelphia restaurant critic Craig LaBan. “This book wouldn’t exist without my husband,” she says, “who brings excitement, adventure, love, and great food into our lives every day, and has always been open to my writing a novel about a woman who is married to a wacky restaurant critic. For the record, Craig is not obsessive or controlling like Sam—and Craig did not tell me to say that.” But, even if her main characters are fictitious, there is no denying that Elizabeth draws on aspects of her own life to lend a delicious verisimilitude to the novel.

The Restaurant Critic’s Wife is a charming portrait of the complexities of life that many women face when dealing with their marriages, their children, their friendships, and their careers. All the talk about exquisite food is merely the icing on a one-of-a-kind cake. 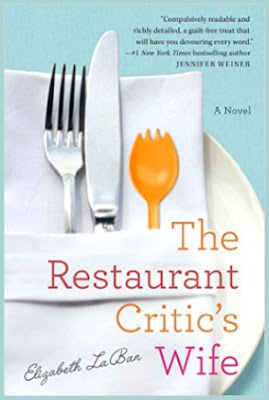 There's a lot to love about this book--especially if you are a foodie who likes to alternate some tasty food descriptions with snorts of laughter. Sam is so over the top sometimes with his *rules* for keeping his identity a secret that it is a wonder that Lila doesn't kill him! He drove me crazy. From his disguises, to skulking through restaurant garbage cans, to not talking to the neighbors (or anyone who may have any association to anyone even remotely connected to a restaurant), it is easy to understand why Lila feels so isolated. She's in a new city, with a toddler and a new baby, missing her high-powered job managing hotel crises, and her only friend in her new hometown owns a restaurant with her husband that Sam is set to review. Even though I don't have kids or a beyond quirky husband, it was easy to relate to Lila because who doesn't have those moments of questioning your life choices and the path you seem to be on?!

The Restaurant Critic's Wife manages to be both funny and poignant. I had the opportunity to join in a TLC Readers Facebook chat with Elizabeth LaBan and asked her about her own experiences as the spouse of a restaurant critic (it was apparent that we all found it fascinating with the many questions she was getting about her husband's job!) and although she says he isn't nearly as wacky as Sam, there were many little nuggets of truth in there. It keeps the book feeling real and makes it a great read for the January doldrums and for my first TLC Book Tour of the new year. (Don't forget to enter below to win your own copy!)


Food, food, food, there was enough of it in The Restaurant Critic's Wife to make it difficult to choose something to make inspired by my reading. Sam's newspaper had a quirky rating system of swans (instead of forks or stars) to review restaurants and there were some four swan dishes that tempted my palate. In the Facebook chat with Elizabeth on her release day, she mentioned that she prefers simpler fare then her husband does. Since I like to cook and eat simply, those were the dishes I was most drawn too--the duck gumbo that same recommended Lila try when they met in New Orleans (and the Sazerac cocktail and banana pancakes he made for her there), her favorite sour cream coffeecake from a restaurant Sam reviewed, countless pasta and spaghetti dinners (including one hilarious scene where the glue from Sam's beard disguise prevents him from talking clearly, causing the waitress to treat him like he has some special needs), fondue that Sam declares has hidden American cheese (egads!) and a tasty sounding shrimp and chick-pea curry--were all on my "short-list" for this book. 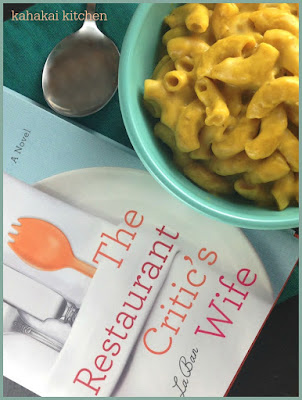 Ultimately it was macaroni and cheese that won the day. On a spring trip to the Jersey Shore, Sam devises the "Mac and Cheese Test"--bringing boxes of Kraft Macaroni and Cheese to the restaurants they dine at to see how/if each restaurant will deal with the request to make it for their daughter Hazel. I thought it was pretty funny and kind of ingenious (since I didn't have to see him do it or eat it like poor Hazel who eventually had, "Too much macaroni.") I forgot to ask Elizabeth if this test really happened but I hope it did. ;-) 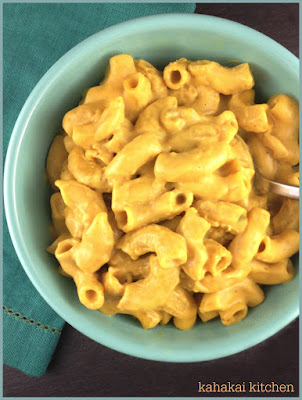 My goal was to make a Kraft-like stove top mac and cheese but I am clearing wheat/gluten, dairy, and added sugar out of my system for a few weeks to see if it helps my breathing. No matter, I am a big fan of trying different vegan mac & cheeze recipes and I found one that a blogger created to get her daughter over the boxed variety. With a dairy-free base and gluten-free pasta, I could still get a bowl of simple, creamy comfort.

Drain pasta, reserving about 1/2 cup or so of the cooking water. Return drained pasta to pan and add the sauce. Cook, stirring frequently, until the mixture boils and thickens, adding pasta water as needed for additional moistness. Once sauce is thick and creamy to your liking, serve immediately.

Notes/Results: Not my favorite vegan mac and cheese ever but I liked the list of healthy ingredients and a bowl of cheeze-ish pasta is always welcome. This one makes an ultra-creamy sauce that stayed fairly thick even when I added all of my reserved pasta water. People not used to non-dairy cheeze options or nutritional yeast will argue it doesn't taste like "real" cheese (but does boxed macaroni truly taste of "real cheese" anyway?). I am sure Sam would hate it--hah! But for me, it hit the spot. (BTW: One other thing about vegan mac and cheeze is that you have approximately 3 minutes once it is dished up before it starts to cool and look gloppy so pardon the pictures--it tastes better than it appears.)  You can thin out the leftovers with a little extra non-dairy milk when reheating. 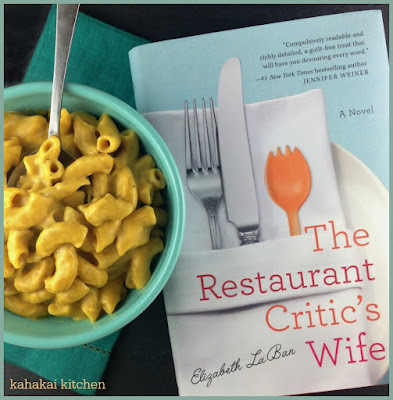 The Restaurant Critic's Wife is my second entry for the Foodies Read 2016 event. You can check out the January Foodies Read linkup, hosted by Heather at Based on a True Story, to see what everyone is reading this month.

The publisher has generously offered a copy of this fun foodie book to one of my readers as part of this TLC Blog Tour. (Open to US/Canada addresses)

To enter the Rafflecopter Giveaway below, you must leave a comment (Basically because I like to read them!) ;-) based on the subject of the book:

As a food critic, Lila's husband Sam used the newspaper's quirky rating system of swans to evaluate the restaurants. Leave a comment telling me about a restaurant or a particular dish that you loved and would give 4 swans to (the highest rating). (If you don't eat out or can't think of a restaurant dish, you can tell me about one of your own dishes that deserves a 4 swan rating!)

Note: A review copy of "The Restaurant Critic's Wife" was provided to me by the publisher and TLC Book Tours in return for a fair and honest review. I was not compensated for this review and as always my thoughts and opinions are my own.