The Book Tour Stops Here: A Review of "Without Light or Guide" by T. Frohock, Served Up with a Recipe for Espinacas con Garbanzos (Spanish Chickpeas & Spinach Tapas)

It's my last TLC Book Tour of the year (and can you believe that this final review makes it 50 book tour reviews for the year!?) and it's a slightly different genre for me--historical science-fiction. Today I am reviewing the novella, Without Light or Guide: Los Nefilim Part Two by T. Frohock (with a glimpse of Part 1 Midnight's Silence included). Set in Spain, primarily in the 1930s, this series creates a unique otherworld of angels and demons. Accompanying my book review is a recipe for Espinacas con Garbanzos (Spanish Chickpeas & Spinach), a tapas or small plate dish, inspired by my reading. 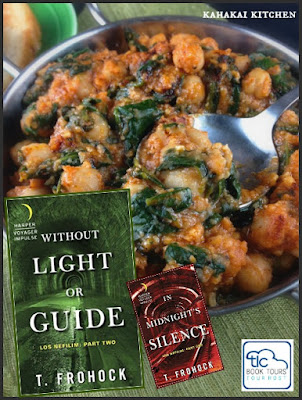 Always holding themselves aloft from the affairs of mortals, Los Nefilim have thrived for eons. But with the Spanish Civil War looming, their fragile independence is shaken by the machinations of angels and daimons… and a half breed caught in between. Although Diago Alvarez has pledged his loyalty to Los Nefilim, there are many who don’t trust his daimonic blood. And with the re-emergence of his father—a Nefil who sold his soul to a daimon—the fear is Diago will soon follow the same path. Yet even as Diago tries to prove his allegiance, events conspire that only fuel the other Nefilim’s suspicions—including the fact that every mortal Diago has known in Barcelona is being brutally murdered. 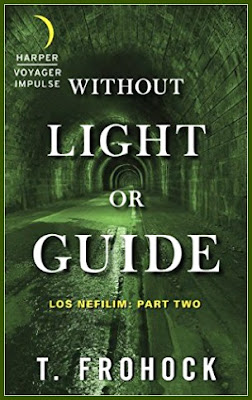 No matter how well each book stands on its own, I have a *thing* about reading a series in order, so when the chance to read this second book in the Los Nefilim series, I asked for a copy of the first book, In Midnight's Silence. So you know that as usual, I am going to recommend that you start with In Midnight's Silence too--both e-books are only .99 cents right now on Amazon, they are quick read novellas, and both are interesting and enjoyable stories--so well worth it. But, just in case you don't take my advice, the author provides a brief recap or refresher of the events and people in the first book which is super helpful since the world of the Los Nefilim world is complicated. I think if you are going to have a series of novellas with lots of characters and world-building, recaps like this are a brilliant idea. Thumbs up to the author for such a smart idea! 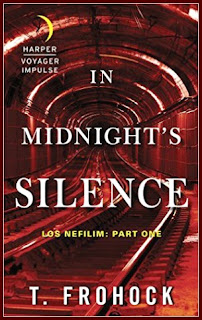 Book One, Midnight's Silence, sets up the world of Los Nefilim, a group of angel-born reincarnates that monitor demon activity for the angels. Diago Alvarez, was born of an angel mother and a former Nefil with demonic parents, and is caught between the two groups, remaining neutral in their conflict. It is 1931 in Spain and Diago has a lover, Miquel, who is an officer in Los Nefilim. The two live together in Barcelona, after Miquel,was reassigned there from Seville by Los Nefilim's leader Guillermo. Diago returns home one evening from his job teaching music and finds Miquel has been taken by an angel (Prieto) and Diago is forced to offer a child to the daimon Moloch in exchange for a coin Prieto wants that holds the key to a powerful bomb. Diago must use his wits and the power of his song to save Miquel and the child, who he has a very personal connection to. 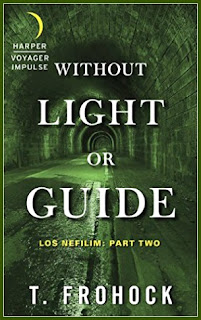 Without Light or Guide picks up shortly after Midnight's Silence leaves off. Diago and Miquel are back in Seville with (spoiler if you haven't read the first book) his newly-found son Rafael, recovering from the grave wounds he received from his battle with Moloch. Diago has chosen to pledge his allegiance to Guillermo and Los Nefilim, in part so that Rafael will be protected but finds him self doubted by many--who think he will choose the daimon side like his father. Guillermo has a dangerous assignment for Diago as the battle between the angels and daimons escalates, putting the mortal world and Los Nefilim even more at risk.

Whew! It is hard to explain these books and have it make sense and do justice to the dark and detailed world that T. Frohock has created--the historical aspects of the 1930's Spain setting, the fantasy realm of angels, daimons, Los Nefilim, and the songs that give them their power. You also have love--familial with Rafael and the enduring romantic love between Diago and Miquel, loyalty and betrayal, and the crisscrossing lines of good and evil. Although different from most of my usual reading, I found myself caring about the characters, wrapped up in the story, and looking forward to seeing what comes in the next installment.
-----

Author Notes: T. Frohock has turned her love of dark fantasy and horror into tales of deliciously creepy fiction. She currently lives in North Carolina where she has long been accused of telling stories, which is a southern colloquialism for lying. Check out more of her works and news at www.tfrohock.com.

The Los Nefilim series gets a lot of story telling done but understandably doesn't spend a lot of time on food. There is some mention of pastries, coffee and tea, bread and of course the mentions of Seville made me think of oranges. In Without Light or Guide there is a mention of a pleasant family dinner cooked Miquel including roasted vegetables, bread and butter, and homemade wine. At one point, Diago, new to his role as a father, reaches over and daubs a piece of spinach from Rafael's lips so I decided to take my inspiration from both the spinach and from Spain. When I put the two together and looked on line, several recipes for Espinacas con Garbanzos or Spanish Chickpeas & Spinach came up. Since it seems to be a traditional tapas (small plate) dish in Seville--especially during the cooler months, I thought it a perfect dish to represent the book. 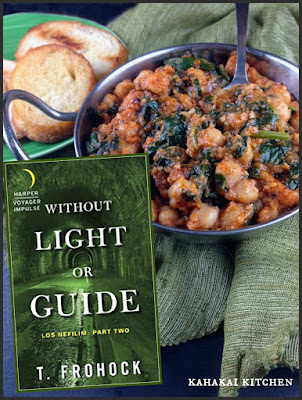 I love that it is such a simple dish that uses pantry and fridge items I usually have stocked up--chickpeas, stale bread, a big container or baby spinach, Marcona almonds (my favorite), and sherry vinegar. For some reason I decided I was nearly out of sherry vinegar (I had over half a bottle--grrr...) and *needed* a second bottle. Cooking along with British chef Nigel Slater got me into drizzling a bit of sherry vinegar on my eggs but I am always looking for different ways to use it up.  There were many different interpretations of the dish online but I liked this stew-like version found at Spanish Sabores. 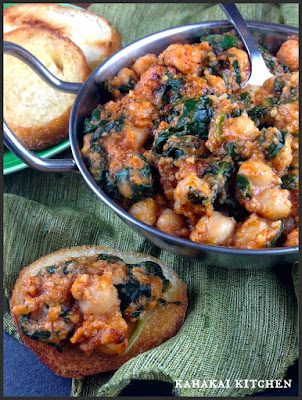 Recipe Author Lauren Aloise Notes: Espinacas con garbanzos are a traditional tapa in Seville, especially popular during the chilly winter months and during lent. But the dish’s history goes far beyond Andalusia. Spinach comes from Ancient Persia (modern Iran), where Arab traders got their hands on it and eventually introduced it to the Mediterranean. There are records of spinach being a popular Spanish vegetable by the end of the 12th century, and it was an important ingredient in Moorish and Sephardic Jewish cuisine in Spain."

Coat a large saucepan with extra virgin olive oil and heat to medium-high. Before the oil gets too hot, add the spinach (in batches if necessary) and sauté until just wilted. Remove spinach and strain in a colander.

Re-coat the pan with olive oil and add in the bread cubes and raw almonds. Fry until the bread and almonds are browned and crispy on each side. Add the chopped garlic, cumin, cayenne and black pepper and sauté for a couple of minutes, until the garlic is fragrant and turning brown.

Transfer the saucepan ingredients to a blender/food processor and add the sherry vinegar. Blend the ingredients together by pulsing until you have a thick paste (don't over blend and make it gooey).

Return the paste to the saucepan and add your garbanzo beans and tomato sauce. Stir gently until the chickpeas are fully coated by the sauce (add a bit of water to thin things out if needed). Add the spinach and stir gently until it is evenly incorporated and everything is heated through.

Taste and season with salt and pepper.

To Plate, Place chickpea-spinach mixture in a bowl and drizzle a swirl of extra virgin olive oil on top, then sprinkle on a small amount of smoked Spanish paprika. Serve with grilled bread if desired. 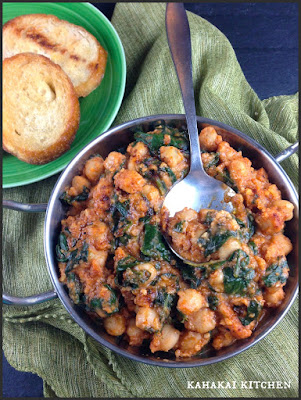 Notes/Results: Such an easy dish with wonderful flavor. The sherry vinegar really stands out, adding a pop of flavor to the beans and spinach. I found that I wanted more tomato sauce (and some water) for thinning out the sauce and enabling it to cover the beans and almond/toasted bread paste. Although there is bread in the mixture, this dish is really nice eaten on/with grilled bread (I rubbed mine with garlic after toasting), or it can be eaten like a hearty stew. Quick to the table and really delicious, I will be making this again for an easy weeknight meatless meal. 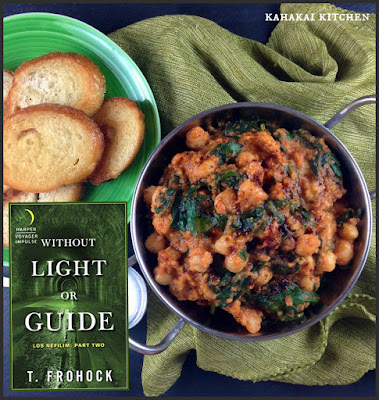 Note: Review copies of "Without Light or Guide" and "In Midnight's Silence" were provided to me by the publisher and TLC Book Tours in return for a fair and honest review. I was not compensated for this review and as always my thoughts and opinions are my own.