I am hosting Food 'N Flix this month (you can see my announcement post here) and I'm so happy to share Eat Drink Man Woman (one of my very favorite classic foodie films) with the group. Of course I am sneaking in (the day before the deadline) to my own party as usual. ;-) I re-watched the film early in the month and decided on my dish, it just took me this much time to actually get around to cooking it. 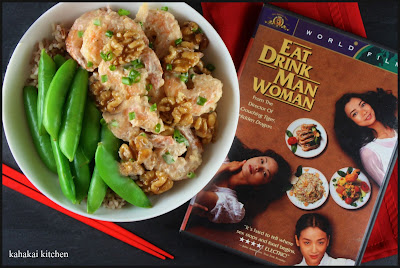 If you have not seen this sweet and funny Ang Lee film about a widowed father and semi-retired chef and his three very different daughters, all who share their 'secrets' by announcing them at the elaborate weekly family dinners he cooks for them, do give it a go. It is subtitled--which I know isn't everyone's cup of tea--but the story is easy enough to get caught up in (especially if you have seen its Hispanic remake Tortilla Soup) and the food is plentiful and drool-worthy. 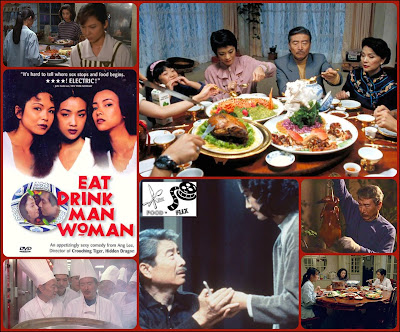 You would think that with the amount of beautiful food that Mr. Chu creates, I could have found a fancy Taiwanese-style dish to make from the film. But sadly, my dish is not Taiwanese--it's an Americanized Hong Kong-style dish that just happens to be my guilty pleasure go-to at my favorite Chinese restaurant; Honey-Walnut Shrimp. Truly a guilty pleasure because between all of the saturated fat and sugar contained in this dish, it isn't something I indulge in often. Still, when I am 'eating my feelings'--rarely is there anything that satisfies as much as this dish. It has some slight variations depending on the restaurant, but generally it is slightly crispy, lightly battered shrimp with sugary candied walnuts tossed in a creamy (usually mayonnaise-based) sauce. I have been toying with making a healthier version for a while now and this seemed like a great push to actually do it. So, definitely it's different form the shrimp dishes served in the movie, but a dish that still says family, comfort and love to me. ;-) 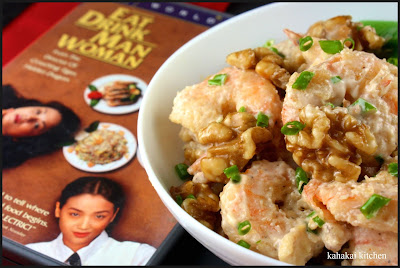 I tend to prefer a lighter sauce to begin with in my Honey-Walnut Shrimp. I have had this dish where it is a big glop of mayo and frankly that's a little too guilty and WAY too much mayonnaise for my tastes--I want it glossy and creamy, not gloppy. I decided to lighten it up but still keep all of the elements--sweet-savory-crispy-creamy--that I love in the original. This version is yogurt based--although I left in a bit of the mayo for texture, and I added a touch of heat to keep it interesting. I also cut down on the white sugar that usually ends up in the dish, using honey and maple syrup to sweeten. I kept the shrimp lightly battered and sauteed the shrimp in coconut oil rather than deep-frying them, and I used a variation of Ellie Krieger's healthier Maple-Glazed Walnuts. It ends up being still a pleasure and an indulgence, but served with brown rice and steamed sugar snap peas, it becomes a healthier, much less guilt-inducing dish. 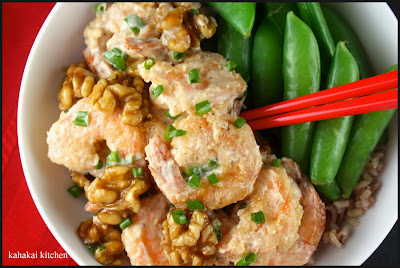 Sauce:
In a medium-large bowl, mix yogurt, light mayo, lemon juice, rice vinegar, garlic powder, Sriracha, salt, pepper and honey together until smooth and well-blended. Taste for seasoning and adjust to your preferred level of sweet/tangy/spice/salt. Set aside.

To large frying pan, add 2-3 tablespoons of coconut oil--enough to cover the bottom completely. Heat over medium high heat until hot and a bit of the egg mixture dropped in begins to bubble.

Dip the shrimp into the egg mixture, lightly shaking off any excess and then dredge into the four mixture, again, shaking off the excess. A few shrimp at a time, saute them in the hot oil for about 1 1/2 to 2 minutes per side, or until the breading turns slightly golden and the shrimp are pink and cooked through but not over-cooked. Time will vary based on the size of the shrimp used. Transfer the cooked shrimp to a plate lined with paper towels to drain. Continue until you have cooked all the shrimp.

Add the hot shrimp, and 1/2 the Maple-Honey Glazed Walnuts to the sauce and toss to coat. Serve immediately.

To Serve:
Place the shrimp over brown rice. Garnish with the remaining glazed walnuts and sliced green onions. Serve with steamed sugar snap peas if desired.


Preheat a dry skillet over a medium-high heat. Add the walnuts, maple syrup and salt. Cook, stirring frequently, until syrup is caramelized and nuts are toasted, about 3 minutes. Let cool slightly and stir to separate. 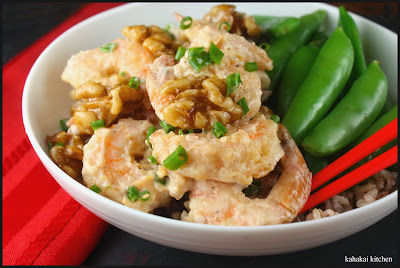 Notes/Results: Oh yeah, this made me happy. Much healthier and cheaper than getting this dish at a restaurant, and although there are a few steps, it's not that hard or time consuming to put together. I had my brown rice, warm in the rice cooker and my lightly steamed sugar snap peas at the ready, so the dish came together pretty quickly. (Thanks to frozen, easy-peel wild shrimp, defrosted over night). I will admit that with the lightening up, the addition of Sriracha, mochiko (rice flour), rice vinegar, etc., that this dish isn't traditional Chinese cooking but the flavor and the pleasure was all there. It was creamy and sweet enough to match the classic dish, but I liked the spicy notes of the hot sauce and the tangy essence that the yogurt and vinegar gave it. The sugar snap peas are optional, but they add some color and a nice crunchy texture that pairs well with the creamy shrimp. I will happily make this dish again. 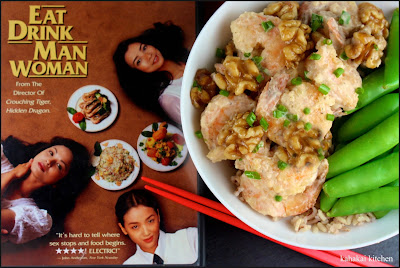 The deadline for submission for this round of Food 'Flix is Wednesday, July 29th,
and I'll be rounding up all of the Food 'N Flix entries here at Kahakai Kitchen very shortly after.

If you missed July's Food 'N Flix event but you like food, films, and foodie films, consider joining us in August, when my friend, the lovely Debra of Eliot's Eats will be hosting with August: Osage County.