The Book Tour Stops Here: A Review of "One Step Too Far" by Tina Seskis, Served with Diana Henry's "Crazy Salad"

An intense mystery and psychological drama One Step Too Far: A Novel by Tina Seskis, is what is on today's TLC Book Tour. Since things get a little crazy in this book and it kept me guessing to the final page--which made me a little crazy, I made a variation of Diana Henry's Crazy Salad to accompany it. 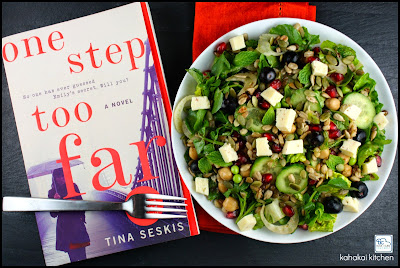 The #1 international bestseller reminiscent of After I’m Gone, Sister, Before I Go to Sleep, and The Silent Wife—an intricately plotted, thoroughly addictive thriller that introduces a major new voice in suspense fiction—a mesmerizing and powerful novel that will keep you guessing to the very end.

No one has ever guessed Emily’s secret. Will you?

A happy marriage. A beautiful family. A lovely home. So what makes Emily Coleman get up one morning and walk right out of her life—to start again as someone new?

Now, Emily has become Cat, working at a hip advertising agency in London and living on the edge with her inseparable new friend, Angel. Cat’s buried any trace of her old self so well, no one knows how to find her. But she can’t bury the past—or her own memories.

And soon, she’ll have to face the truth of what she’s done—a shocking revelation that may push her one step too far. . . . 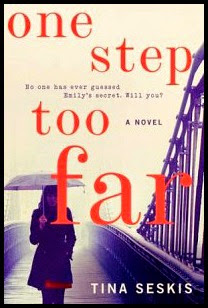 One Step Too Far starts with Emily stepping away from her life, leaving her family and on her way to a new life. We don't know why. We know she is conflicted about leaving and that something has happened to cause her to leave, but not much more. Next, we go back 30 years or so, to Emily's birth--and find out that she has a twin, born after Emily and a surprise (and not a happy one) to her mother and father who were expecting one baby and don't want a second. Whether from nature or nurture, the temperaments of these two sisters are very different--Emily is the happy golden child and her sister Caroline is rejected, bitter, and takes out her anger on her twin, her family and the world. From there we go back and forth through past and present, hearing mostly from Emily but also from the points of view of her husband Ben, Caroline, her parents, and her friend Angel. The story unfolds in bits and pieces as Emily becomes Cat and the reader tries to guess what terrible event, what dark secrets, led her to run away from what seemed to be a happy life. I can't say much more about the book than that or the story would be spoiled.

One Step Too Far is a definite page-turner with so many twists and turns, I found myself tied up in anxious knots. It's not a happy book with happy people--Emily as Cat is self-destructive and makes some truly bad choices. She was hard to like as Cat. I knew I should feel sympathetic towards her and that there was going to be a reason for her actions--but I struggled to truly connect with her. With the behaviors of her sister and parents, the only character I really liked was Ben--the husband left behind. But, luckily I didn't have like all of the characters to be intrigued by the story and the mystery. I love to guess the ending in books like this and author Seskis kept me hopping--so many things in this book are not what they seem or what the reader is led to believe, that things were a surprise up to the end. Several times I was tempted to read ahead just to know what happened but I resisted and let it all unfold. Once secrets were revealed, I had to go back and re-read certain parts to see whether I missed something or if I was deliberately misled by the author (if you were wondering it was a bit of both). If you like your books to lean on the darker side of human emotion, enjoy psychological thrillers, and like to be kept guessing as suspense steadily builds, you should like this one.

Author Notes: Tina Seskis grew up in Hampshire, England, and after graduating from the University of Bath spent more than twenty years working in marketing and advertising. One Step Too Far is her debut novel, and was first published independently in the UK, where it shot to the #1 spot on the bestseller list. Her second novel is forthcoming. She lives in North London with her husband and son. Find out more about Tina at her website, and connect with her on Facebook and Twitter.


Sometimes the ideas for the usual dish inspired by the book that accompanies my reviews comes easily--other time it is more of a struggle. For One Step Too Far, it was the later, nothing came to mind immediately. Food mentions in the book are limited--take-out curry and Chinese is mentioned a few times, there are a couple of restaurant breakfasts, lots of coffee (and alcohol and cocaine), a marketing industry dinner of fillet of steak in cream and champagne sauce (or pumpkin and ricotta filo parcels for the vegetarian option) and lemon tart, that Cat passes out into. But nothing captured the mood especially. 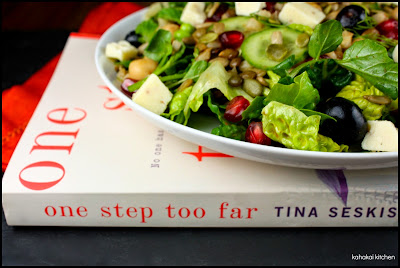 I was looking through a Diana Henry cookbook and remembered a recipe for Crazy Salad that I had been wanting to try and I realized that crazy salad actually captured my feelings about the book--the coming together of the different perspectives, time periods and 'hints' thrown out by the author, that seemed disjointed but came together in the end--much like the many ingredients in this salad that may seem somewhat random, but ultimately come together and taste great. A little crazy, but in the end--very good. 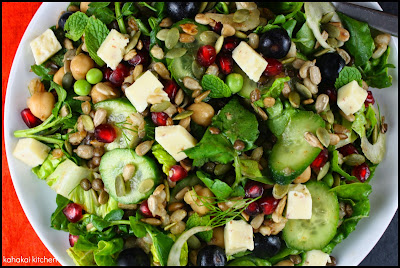 Diana Henry says, "This is one of my favorite dishes in the book. I wanted to come up with a salad, especially one that would be good in the colder months, that was robust, really healthy, and irresistible ("accidentally healthy"). When I served this the kids said "Crazy mom," because they said it was hippy salad reborn. I wasn't sure whether that was a criticism or a compliment, and then sat back and watched them eat platefuls of it.

This recipe is a starting point. Cook other grains... add peas, cucumber, feta cheese, and mint, other beans, black or red lentils instead of Puy, blueberries or chopped apples instead of pomegranates. There are all kinds of things you can do if you start off with a cooked grain as a salad base." 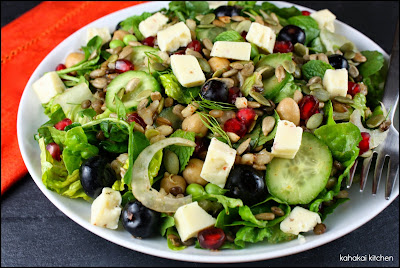 I made several changes to Diana's recipe based on personal preferences and what I had on hand. They are noted in red below.

Crazy Salad
Adapted from A Change of Appetite by Diana Henry
(Serves 6 as a Side Dish, 3-4 as A Main Dish)

Cook grains in a saucepan with plenty of water until grain is cooked but still has a nutty bite. Time will depend on type of grains used--at least 25-35 minutes. Cook lentils at the same time, in water until tender--20-35 minutes depending on the age of the lentils.

Meanwhile, make the dressing by mixing all of the ingredients together, seasoning well. Drain the grains and lentils, run clod water through them to cool them down. Shake strainer vigorously to get rid of as much water as possible. Transfer to a serving bowl, season and stir in half of the dressing.

Toss in all of the other ingredients. If assembling salad ahead of time, don't add the watercress/lettuce until just before serving. (I also would refrain from adding the seeds and cheese until ready to serve.) Add the rest of the dressing. Taste for seasoning and add more as needed. 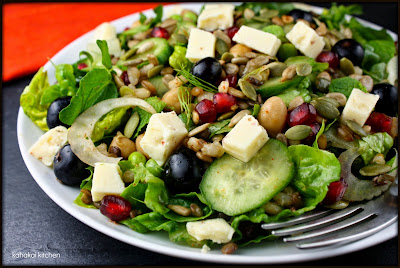 Notes/Results: It occurred to me a few times as I was gleefully opening my fridge and pulling out all kinds of ingredients that I might be overdoing this crazy salad and taking it to an insane level with too many different things in it. Was I taking it "one step too far?!" (Note the cheesy book title tie-in there!) ;-) I need not have worried--this was a fabulous salad full of goodies and like a little treasure hunt to eat--"ooh there's a chickpea," "here's a chewy bite of barley and spelt," "mmm... a little burst of flavor from the blueberry..." It really all worked together, as did the dressing. I did, as you can see from the recipe notes, pump up the spice, tang, and sweetness of the dressing with extra harissa, white balsamic pomegranate molasses and honey. I liked the extra punch of flavor. I think a lot depends on the harissa brand you have--I don't think the jar of paste I currently have on hand is as spicy as others I have tried or made. I would suggest tasting as you go and adding the amount that makes sense for you. I also found the dressing just a little flat until I added in the extra quantities but after my additions, I really liked it and it added that extra flavor you want in a grain salad. I would definitely add the mint and fennel too, if making this again--they bring a cooling feel to the mix. Leave off the cheese for a vegan salad--but it is pretty yummy. Diana recommended feta but I had sampled a local farmer cheese studded with pink peppercorns the other day and loved it, and it was the cheese I had on hand. Goat cheese would be nice too. This is a substantial enough salad to make a light meal but it also paired well with grilled fish as a side dish. All in all, a very tasty salad, satisfying, colorful and full of great textures and flavors--I would make it again. 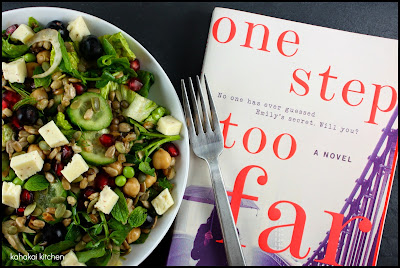 This post is linking up to I Heart Cooking Clubs where this week's theme is Veggie Variations--Diana Henry recipes that are meat free and full of vegetable goodness . You can see what veg-filled dishes everyone made by checking out the picture links on the post. 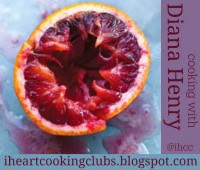 And, I am also linking this fabulous salad up with the Salad Days: 28 Days of Salad Project that my friend Sue is hosting over at Couscous & Consciousness. Sue is making a salad everyday in the month of February and has a linky in place where you can add your favorite salad creations. Go check it out!

Note: A review copy of "One Step Too Far" was provided to me by the publisher and TLC Book Tours in return for a fair and honest review. I was not compensated for this review and as always my thoughts and opinions are my own.

You can see the stops for the rest of the Book Tour and what other reviewers thought about the book here.