Deep, gritty, eclectic glimpses of life and humanity--a short story collection that encompass multiple genres set in the present, the past and the future, is Prism by Roland Allnach. Kahakai Kitchen is a stop on the TLC Book Tour for Prism (and my guess is this is the only blog pairing the review with a recipe), so I'm serving it up with some shards of Dark Chocolate Bark with Almonds & Smoked Sea Salt--rich, dark and fractured like the stories themselves. 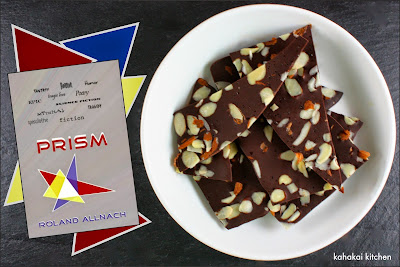 Prism presents the best of Roland Allnach’s newest stories together with his most acclaimed published short fiction. These selected stories fracture the reader’s perceptions among a dazzling array of genres and styles to illuminate the mysterious aspects of the human experience. Roland Allnach has been described as a ‘star on the rise’ (ForeWord Clarion), ‘a master storyteller with a powerful pen’ (Cynthia Brian, NY Times Bestselling author), with writing that is ‘smart, elegant, and addicting’ (San Francisco Review).

Prism collects seventeen stories into one volume, following a trail of diverse genres and narrative forms. From literary fiction to speculative fiction, from humor to horror, from tragedy to mythical poetry, Prism represents a wide ranging journey united by contemplations on the human condition. Including Allnach’s award winning published fiction (“Conquest’s End” and “The City of Never”), a Pushcart Prize nominated story (“Creep”), Prism also consists of the previously unpublished pieces “Titalis” (a tragedy along the lines of Shakespeare and Greek theatre), “Of Typhon and Aerina” (a tribute to epic verse), “Tumbleweed” (a humorous ditty), and “Dissociated”, a surreal short to cap off the collection. 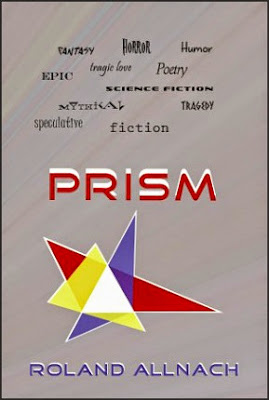 I have read a few short story collections over the past months and I find it is a genre that I increasing like for the chance to drop into different worlds for a brief time. Prism is such a diversity of stories (seventeen in all), dipping into horror, tragedy, dark humor, science fiction, mythology, and even poetry, and it is impressive to see an author so talented in the different genres. With the broad assortment, it is understandable that not every story will resonate with a reader and so I found myself extremely enjoying the first half of the book and bored and impatient in the second half. Part of it was me getting behind this month and trying to read the book in a couple of days--I think this book is best delved into a couple of stories at a time. Part of it might have been the ordering of the stories. The first half of the book felt crisp, several of the stories appealing to my enjoyment of being slightly creeped out like "11"-- where a man has been terrorized by someone who has been lurking after him most of his life. "Creep"--was a story about a little boy who wakes up thirsty and is afraid of what might happen as he leaves his bed to head to the bathroom for water. I loved "Flowers for Colleen”--where two serial killers meet accidentally and end up having coffee and scones. (Who knew serial killers feel isolated and long for a bit of community?) I started to drag with “Titalis”--a well-written story with a Shakespearean tragedy feel to it and the longest story in the book by far. It was followed by a truly epic poem "Typhon and Aerina" that just didn't seem to end--and the formatting in my ARC e-book was wonky which made it disjointed to read. I will confess that poetry is usually hit or miss for me and then that the epic poem was then followed by another poem about a 'well-endowed gunslinger' that just did not seem to fit the mood of the rest of the book and fell a bit flat. Although the entire book wasn't a match for me, based on the first half of Prism I would definitely read more from this author. His writing is strong, smart and witty, as well as being slightly twisted (in a good way), and the beauty of this collection is that others will probably really enjoy the parts that I didn't like as much. 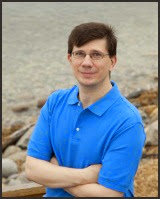 Author Notes: Roland Allnach, after working twenty years on the night shift in a hospital, has witnessed life from a slightly different angle. He has been working to develop his writing career, drawing creatively from literary classics, history, and mythology. His short stories, one of which was nominated for the Pushcart Prize, have appeared in many publications. His first anthology, Remnant, blending science fiction and speculative fiction, saw publication in 2010. Remnant was followed in 2012 by Oddities & Entities, a collection spanning horror, supernatural, paranormal, and speculative genres. Both books have received unanimous critical praise and have been honored with a combined total of twelve national book awards, including honors from National Indie Excellence, Foreword Reviews, and Readers’ Favorite. Prism marks Roland’s third stand alone publication.

When not immersed in his imagination, Roland can be found at his website, rolandallnach.com, along with a wealth of information about his stories and experiences as an author. Writing aside, his joy in life is the time he spends with his family. You can also find Roland on Facebook. 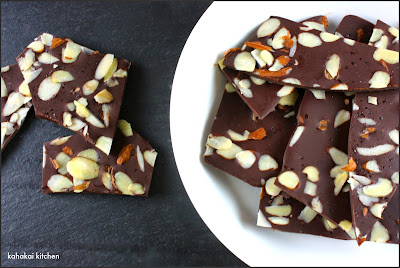 Not a book that inspires foodie thoughts--a few of the stories are downright appetite suppressing in fact. I decided that my favorite stories in Prism called for something dark, seductive--maybe something slightly nutty? Dark Chocolate Bark with Almonds & Smoked Sea Salt broken into jagged pieces seemed appropriate to fit the mood of the book. 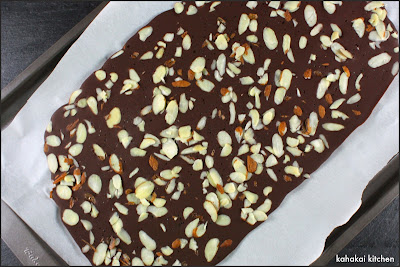 Break chocolate into small pieces and melt (either in microwave or using double-boiler on stove), stirring until completely melted.

Break the chocolate into pieces and serve. Keep in a airtight container in the refrigerator or in a cool dark place as the chocolate melts easily.

Notes/Results: An easy and great way to liven up plain dark chocolate and make it something a bit special. It's been a while since I made chocolate bark and I happened to see a variation of this one (the original recipe included coconut) and started craving the sweet and salty combination. I have a grinder of smoked sea salt from Trader Joe's that I used to impart a bit of smoky flavor. Next time I will grind it coarser so you can see the crystals on the chocolate but the flavor of this was spot on. It's rich enough that a piece or two satisfies. I will make it again. 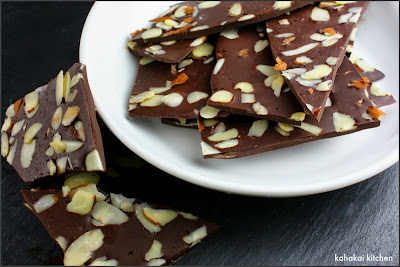 Note: A review copy of "Prism" was provided to me by the publisher and TLC Book Tours in return for a fair and honest review. I was not compensated for this review and as always my thoughts and opinions are my own.

You can see the stops for the rest of the Book Tour and what other reviewer thought about the book here.